Some injuries after shooting at Texas high school

(CNN) — At least a some people were injured Friday morning after a shooter opened fire at a high school in the southeastern Texas city of Santa Fe, officials said Friday.

Leila Butler, a sophomore at the school, told ABC13, a local affiliate, that fire alarms at the school went off at about 7:45 a.m. 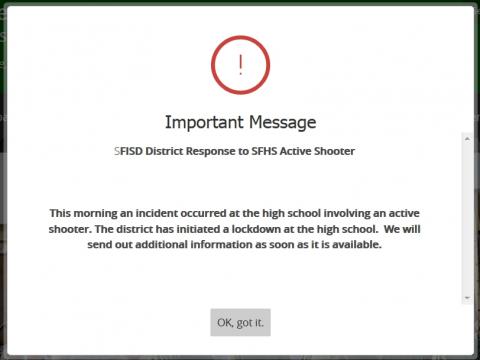 A gunman walked into an art class at Santa Fe High School and began firing what looked like a shotgun, a witness told CNN affiliate KTRK.

The student said she saw one girl with blood on her leg as the class evacuated the room.

"We thought it was a fire drill at first but really, the teacher said, 'Start running,'" the student told the television station.

The student said she didn't get a good look at the shooter because she was running away. She said students escaped through a door at the back of the classroom.

By 9 a.m. local time, an assistant principal told reporters "the worst is over," adding that a single shooter had been taken into custody.

The school district issued a statement acknowledging that some people had been injured, but it did not detail the number or severity of those injuries.

This morning an incident occurred at the high school involving an active shooter. The situation is active, but has been contained. There have been confirmed injuries. Details will be released as we receive updated information. Law enforcement will continue to secure the building and initiate all emergency management protocols to release and move students to another location. All other campuses are operating under their regular schedules.

At this time, students from the high school are being transported by SFISD transportation to the Alamo Gym located at 13306 Highway 6. Parents may reunite with their students at this location.

The district will continue to keep you updated as information is available. Safety and communication are our top priorities.

Aerial video from the scene showed several police officers outside the school. Some were searching students and their backpacks.

Angelica Martinez, a 14-year-old student, told CNN she and her schoolmates were being evacuated at one point "like it's a fire drill."

"We were all standing (outside), but not even five minutes later, we started hearing gunshots," she said.

"I didn't see anybody shooting, but like (the gunshots) were kind of spaced," she said, adding she heard about four shots.

The Santa Fe Police Department, Harris County Sheriff’s Office, Galveston County Sheriff and Bureau of Alcohol, Tobacco, Firearms and Explosives all said they were assisting in the response.

Santa Fe is a city of about 13,000 people roughly 30 miles southeast of Houston and 20 miles northwest of Galveston.

The high school has about 1,400 students, according to GreatSchools.org.