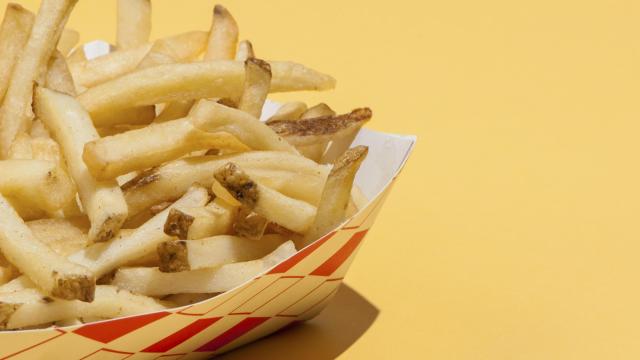 There’s no time of year that isn’t good for French fries, but summer is the best. On the boardwalk, at a county fair and on road trips, where they’re the best thing to eat while driving, one hand in the paper cup, other hand on the wheel. They’re the best thing when you’re chilled to the core and starving because you stayed in the lake or the ocean too long.

They’re the best hot and crispy counterpoint to squishy lobster rolls, to frozen lemonade, to steamers. French fries, like soft ice cream, are not for eating in. You have them when you’re out. And in the summer, out is where you want to be. (Note that the French-fry family includes only deep-fried potatoes. Home fries are not French fries.)

All fried, no potato. This is a sneaky mouthful of hot hay, self-identifying as “fries” but lacking the starchy potato goodness of an actual French fry. You may as well go get a funnel cake.

At the opposite end of the pendulum swing, steak fries are too much potato, not enough crunch. They are an unholy union of baked potato and French fry, with the most unfortunate qualities of each.

Long before spiralizers, there was the curly fry, or Suzi-Q, a fry that goes on way too long. Fries should be eaten in bites, not lowered into the mouth like a drone payload. Once upon a time, they were cut fresh and cooked plain, but now they usually sport an orange dust of paprika, cayenne, onion and garlic powders. The only reasons to eat them: Either you eat regular French fries often enough to get sick of them (in which case, be careful), or you’re under 12.

The lattice pattern makes them both crisp and clingy, with just the right balance of potato and crunch for breakfast. (I like them as a base for sunny-side-up eggs.) And because you can eat them with a fork, waffle fries are prime real estate for add-ons like pulled pork and melted cheese, or cheese curds and gravy, or minced herbs and grated Parmesan if you are into that sort of thing. (Sprinkling garnishes on regular French fries is a fool’s errand; they slide right off.)

The Pringles of French fries, these are proudly unnatural, from the machine-cutting system that makes the crinkles to the fact that every fry is exactly the same shape and size — an early example of superfluous American culinary technology. The angles of the crinkles theoretically make them crunchier than other fries. I’m not buying it, but they do hold onto ketchup well. A summer exception: The ones at Nathan’s Famous in Coney Island are fat in the middle and thin on the edges, preventing them from being too uniform.

They’re a throwback, but what perfect summer treat is not? These are the thick coins you find in family restaurants in farm country, like Stroud’s around Kansas City and Yours Truly in northeast Ohio, and in old-school steak joints like Gene & Georgetti in Chicago and J.G. Melon in Manhattan. Sometimes they are ridged, but this is a mere decoration and not a structural element.

Long, square-cut fries, they are served in a thick, floppy tangle, like a lifeguard’s bangs. Purveyors of these — like Thrasher’s on the Maryland coast and the Wee Chippy in Venice Beach, California — tend to be specialists who make nothing else, and when they’re good, they’re very, very good. When they’re not, it’s because the frying oil was not quite as hot as it should be, making them sodden and pale at the bottom of the bucket. The good ones might have bits of peel left on, and are served in stroll-worthy cardboard cups — or buckets, because you have to have fries as a meal at least once a summer.

Cue the white paper cone and springy metal holder. Euro-style frites are usually fried twice for maximum crispness. The ideal restaurant fry, these are what you want to soak up the dregs of a hanger steak or a pot of mussels, preferably eaten outdoors with les pieds dans le sable (toes in the sand, a French term used for beachside restaurants). They are cut 3/8- to 1/2-inch thick, have an evenly medium-brown exterior and enough fluffy starch inside to taste definitively of potato.

Whether it comes out of the deep fryer at McDonald’s or at Balthazar, the standard American fry is a slim, golden thing of beauty. Only a quarter-inch thick, this fry can be cooked just once instead of twice, and still emerge with enough crispness to stand up to a cheeseburger, enough taste to go with a lobster roll, and the right stuff to stand proud on its own.