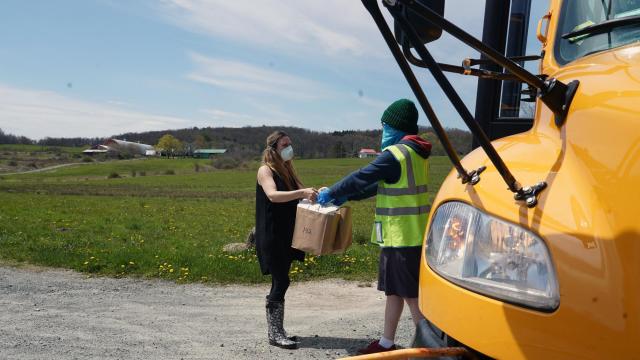 Raleigh, N.C. — State and local school officials worry that a shift in federal rules next week will make it harder to feed children across North Carolina through school breakfast and lunch programs.

Update: On Monday, August 31, the U.S. Department of Agriculture announced waiver updates that it says "will allow summer meal program operators to continue serving free meals to all children into the fall months." State officials are awaiting more details, but this seems to address their concerns.

"We are optimistic the waiver flexibility issued by the Secretary this morning will allow School Nutrition Programs to continue to provide meals to children at no cost as they have done since the unanticipated school closure in March," Lynn Harvey, the state's head of School Nutrition Services, said in an email Monday morning.

The transition from an emergency program with laxer rules back into the traditional program, which has more eligibility checks, means fewer children are eligible. Difficulties in determining that eligibility out in the field may mean systems stop delivering meals or offering pick-ups at schools that offer online classes.

"It's a grave issue," State Board of Education Chairman Eric Davis said this week. "This will decrease the number of children that we're able to feed."

After some back and forth in recent weeks with multiple states, the U.S. Department of Agriculture said late Tuesday that it had extended a waiver used to run the more lenient feeding program through Sept. 30. That waiver had been scheduled to expire Monday.

But the extension may not mean much in North Carolina and potentially in other states.

Lynn Harvey, North Carolina's head of School Nutrition Services, said the extension won't apply here because of the way the waiver was worded and the fact that North Carolina schools opened under a blended plan of in-person and virtual instruction.

The waivers, Harvey said, specify that the less restrictive program "may no longer be operated once schools are open for student instruction."

In the weeks after schools closed this spring due to coronavirus, school systems partnered with food banks, the YMCA and other groups to gear up massive feeding programs. They used schools as pick-up points where parents could come for food and sent out some 2,100 school buses to drop meals off, often at bus stops.

Workers haven't worried about whether children qualify for free or reduced-price meals, which is based on federal calculations tied to family income. They haven't even worried about whether a child is enrolled in school, Harvey said. They've simply distributed meals, and the federal government paid for most of it under the USDA waivers.

But the USDA's move to a more traditional system would mean that only students enrolled in public schools and who meet income eligibility requirements qualify for a free lunch or breakfast. Whether a child qualifies is supposed to be confidential, making it more difficult to determine eligibility at drop-off and pick-up sites, Harvey said.

The program has also been feeding students who are home schooled, charter school students who don't normally qualify and, in general, any child who shows up and needs a meal, she said.

"Just having to provide meals by eligibility status becomes a tremendous challenge," she said.

Harvey gave an example: Someone comes to a school with four children in the car. Two are enrolled in a public school, two aren't and aren't supposed to get a meal.

"How do you deal with that scenario?" she asked.

Some systems have already scaled back their programs. Others have been planning to do so next week. Wake County public schools said Thursday, after this story first published, that it would go back to charging students who don't typically qualify for a free lunch or breakfast starting Tuesday.

All families will need to provide a student ID number at curb-side pickup locations starting next week, the system told parents in a mass email.

A number of congressional leaders, including U.S. Sen. Thom Tillis, have asked the USDA to extend its waiver. Tillis, a North Carolina Republican, said in a letter dated Aug. 17 that the department should "continue to provide the flexibilities needed to enable school food authorities and other (non-school) sponsor organizations to continue to offer meals through the U.S. Department of Agriculture’s child nutrition programs."

In a statement Tuesday night, U.S. Secretary of Agriculture Sonny Perdue said that, since the pandemic began, the USDA has issued "unprecedented waivers to ensure all children across this nation continue to receive nutritious meals, free of charge."

Perdue said the CARES Act, passed by Congress to fund coronavirus pandemic relief efforts, anticipated meal waivers running through the end of June. Congress "did not authorize enough funding for the entire 2020-2021 school year," he said.

"After assessing the school reopening situation nationwide, and the funding availability, USDA extended the availability of school meals waivers with flexibilities through September 30, 2020," he said in the statement. "We have been and are continually calculating remaining appropriated funds to determine how far we may be able to provide waivers into the future."

Perdue said the department "is committed to feeding children in need and ensuring they continue to have access to nutritious meals during the pandemic."

Update: A USDA spokeswoman emailed Thursday and seemed to confirm that North Carolina must transition to the more restrictive program.

"Once school is in session – including in-person or remote learning, USDA encourages states and schools to use the flexibilities we have provided in the National School Lunch Program and School Breakfast Program to ensure children continue to receive nutritious meals," she said in an email.

Davis, the state school board chairman, said Wednesday that the issue is "an incredibly big deal."

"You can't educate a child that's hungry," he said.