FRANK BRUNI & DAMON WINTER: She went blind. Then she danced. 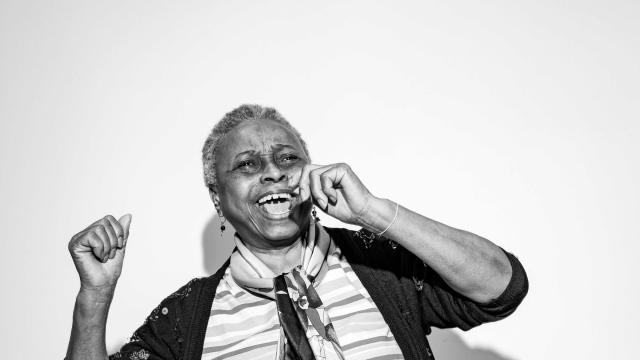 EDITOR'S NOTE: Frank Bruni is a New York Times columnist. He has been with The Times since 1995 and held a variety of jobs — including White House reporter, Rome bureau chief and chief restaurant critic. He is the author of three best-selling books. Damon Winter is a Times staff photographer.  He received the 2009 Pulitzer Prize for feature photography.

There are different responses to unexpected hardship, and when Marion Sheppard began to go blind, she cycled through many of them.

She pitied herself and cried long and hard, because this wasn’t right — this wasn’t fair. Her hearing had been severely impaired since early childhood and she’d endured schoolyard teasing about that, so hadn’t she paid her dues? Done her time?

She raged. “Why me?” she asked, many times. It’s a cliché, but for a reason. She really did want to know why she’d been singled out.

She trembled. This was the end, wasn’t it? Not of life, but of independence. Of freedom.

She spent months wrestling with those emotions, until she realized that they had pinned her in place. Time was marching on, and she wasn’t moving at all. Her choice was clear: She could surrender to the darkness, or she could dance.

That’s what she was doing on a recent Monday morning when I stopped by a Manhattan community center for blind people run by Visions, a social services agency. Marion, 73, was leading her weekly line-dancing class. 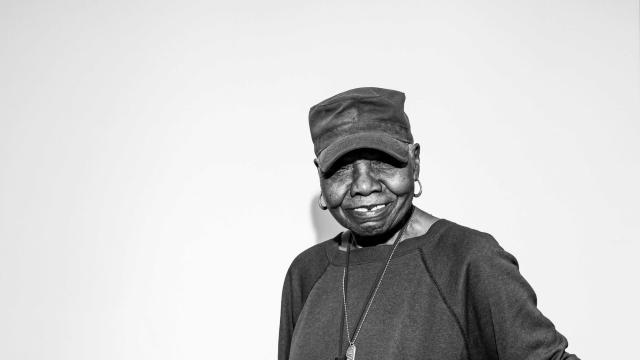 “Ladies and gentlemen, I need your attention, please!” she shouted over the music. Most of her students are people over 60 whose eyesight deteriorated when they were already adults and who can remember different, easier times. She told them: “Just because we can’t see well, we can still do things, and one of those things is dance.” Her chin was high, her shoulders pulled back and her chest pushed forward. That’s how she approaches the world now: ebulliently. Emphatically. 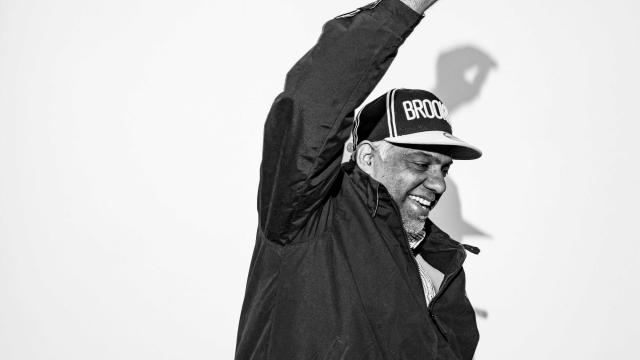 I met Marion because, as I’ve described in previous columns, I’ve had my own brush with blindness — or at least with the specter of it. The vision in my right eye was severely and irreversibly diminished about 2 1/2 years ago, by a condition that puts me in danger of losing the vision in my left eye as well. Since then, I’ve educated myself about blindness, seeking out visually impaired people and the professionals who work with them.

I asked the executive director of Visions, Nancy Miller, about programs that upend assumptions about people with disabilities and that illustrate their resilience.

“My dance instructor is deaf and blind and in her 70s,” she said.

“Your dance instructor?” I responded. That didn’t fit my ignorant vision of Visions.

I dropped in on Marion’s class. Her students are devoted regulars, and while Marion can’t make out their faces, she knows them by their shapes and their voices, which her hearing aids render sufficiently audible.

She calls many of them “baby” or “sweetheart.” As best I can tell, she calls most everybody “baby” or “sweetheart,” a tic in tension with her big, brassy voice, which she uses in class to trumpet orders: “To the right! To the left! Back it up! Tuuuuuuuurn!”  Cross a drill sergeant with a life coach, add a vocabulary heavy on the sorts of endearments stamped on heart-shaped candies and you get Marion. 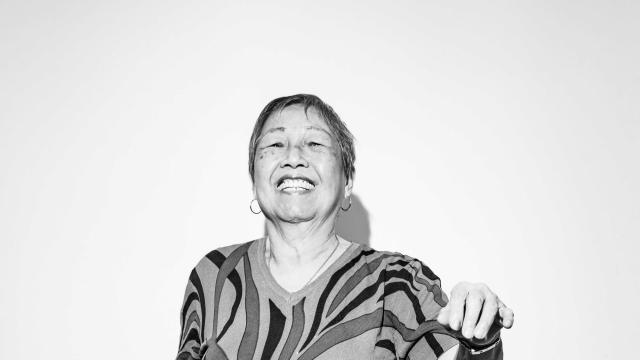 She and her students have memorized the layout of the basement room in which the class is held, and she figures out which of her discs of music to load into the boom box by placing them under a machine, the Aladdin Ultra, that functions as a gigantic magnifying glass. It enlarges the letters on a disc’s case to a point where Marion can make them out. Blindness is a spectrum, and for many blind people, the world isn’t all cloud; it’s just foggy enough to pose formidable challenges and force clever adaptations.

Marion uses her fingers to “read” the controls of the boom box. She uses her hands to determine if her students are moving as instructed. The students with more sight automatically help the ones with less, in accordance with an unspoken covenant.

Sometimes, though, someone just bluntly asks for help, as Marion did when fiddling with an attendance sheet. “I need you for a second,” she told a student standing nearby. “I need your eyes. Can I borrow your eyes?” 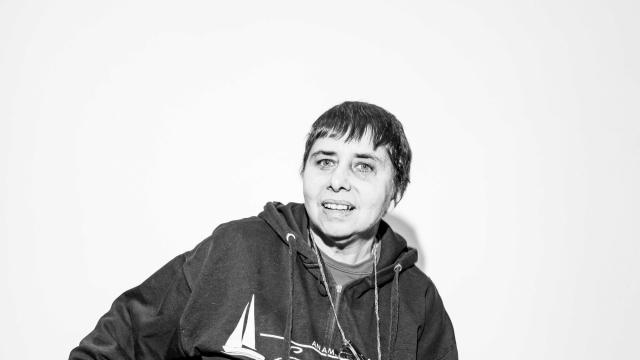 Marion’s own eyes were fine until she was in her 40s, she said, and began to experience episodes of scarily compromised vision. She got a diagnosis of retinitis pigmentosa, a progressive disease that usually shows up at an earlier age. For her, blindness was delayed, but it was coming all the same.

And it was hardly the first test of her strength. Marion didn’t tally her misfortunes for me, but her daughter, Kokeda Sheppard, filled me in. Marion, who has lived most of her life in the Bronx and still resides there, never really knew her father and was just 14 when her mother died, according to Kokeda. While relatives stepped in to help, Marion nonetheless functioned as a sort of parent to her younger siblings.

She got a college degree and, as it happens, worked for decades at The New York Times, though we didn’t know each other. She was first a key punch operator and then a library clerk. She left about two decades ago. By then, her vision had degenerated badly.

Kokeda is her only child and remembers how hard Marion, who separated from Kokeda’s father, always worked to make sure that she didn’t want for anything. Marion routinely drove nearly four hours from their apartment in the Bronx to the private boarding school in Pennsylvania that Kokeda attended and then made nine-hour road trips to visit Kokeda in college in Virginia.

“My mom is one of the most reliable people I’ve ever met in my life,” said Kokeda, 47, who now lives in New Jersey. “If I can be half the woman she is, I’ll be OK.”

It was partly because Marion was so active and proud of her autonomy that her failing vision devastated her at first. She felt powerless. Vulnerable. “I was really terrified,” she told me, and that terror was distilled into a recurring thought: Unable to see a stranger’s approach, she’d be mugged. 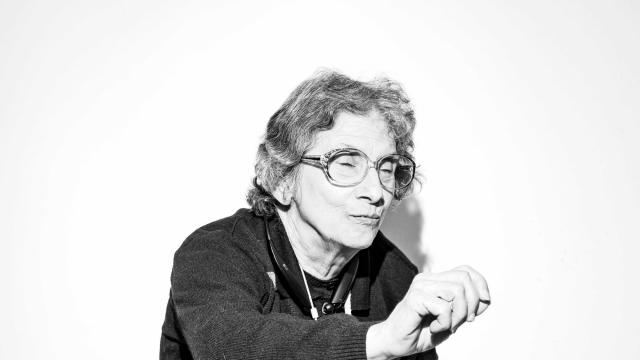 She also couldn’t shake the worry that “people were going to look at me differently, act differently toward me,” she said. “And people do.”

For a while, as her vision faded, she rarely left her apartment. But on one occasion when she did, attending a social event where she encountered other blind people, she was struck by how physically withdrawn they were, how still. “I said, ‘Oh, no,’” she recalled. “‘This is the way my life is going to be? Oh, no.’”

She resolved not to be self-conscious, not about anything related to her blindness. She didn’t merely make peace with the cane that she sometimes uses to walk; she made friends with it. “I always said if I ever had a boy, I’d name him Tyreek, and I never had a boy, so Tyreek is my cane,” she said. “Tyreek is my best friend.”

Line dancing had long been a hobby of hers, and after she started going to events run by Visions and met Miller, she proposed a line-dancing class. Miller was agreeable, provided that Marion could attract a following.

Marion did, and she has maintained it over the past decade. She attributes that less to her music (“Hot Hot Hot,” “Cupid Shuffle,” “Blurred Lines”) than to her mission: She’s creating a rare environment outside their own homes where blind people can be physically uninhibited, where they can move through space not with caution but with joy. Isn’t that the very essence of dance?

“When you go blind, you lose your confidence,” Marion said. “What I want them to do is to have confidence.”

And they do. They find it in the warmth of how she greets them, in her yelps of encouragement — “Owwwww! Yeah! Hit it!” — as they dip and turn. At the second of the two classes I watched, an 87-year-old student of hers told me that she was all nerves and hesitation before she started line dancing with Marion about two years ago. She shuffled everywhere. Now she sashays.

There was a moment in both classes when Marion instructed all of the participants, who were arranged in parallel lines, to form a circle instead. Then, one by one, each of them took a turn in the center, busting moves for his or her clapping, hooting, stomping peers.

Marion took a turn, too. She corkscrewed from a standing position to a crouch. She twisted this way and that. She was fearless. Even better than that, she was limitless.