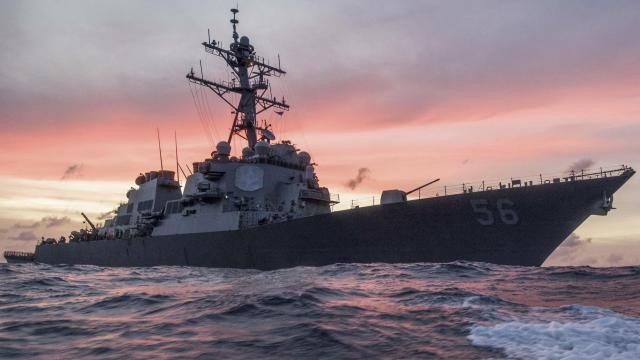 CNN — The White House Military Office coordinated directly with the Navy's Seventh Fleet to have the USS John S. McCain hidden from view during President Donald Trump's visit to Japan, acting Defense Secretary Patrick Shanahan told reporters Sunday, though that request was ultimately not carried out.

The US Navy had previously told CNN the request had been made to lower-level US Navy officials, but it was not known who specifically received the directive about keeping a warship named for the late Sen. John McCain's father and grandfather out of sight to avoid possibly upsetting the President. Trump told reporters Thursday that while he had no knowledge of the plan nor would he have acted on it, he "is not a big fan" of the Arizona senator, and whoever was behind the plan was "well-meaning."

Trump and McCain, who was the 2008 Republican presidential nominee, were frequently at odds before and during Trump's presidency. In 2015, Trump attacked McCain -- who had been a prisoner of war in Vietnam -- as "not a war hero" and again criticized the senator from Arizona after he died of brain cancer last August.

The barbs against McCain from the President did not stop after his death. Seven months after McCain passed away, Trump mocked him on Twitter inaccurately for coming "last in his class," and rebuked McCain for voting against a GOP bid to repeal Obamacare. "I was never a fan of John McCain and I never will be," Trump said at the time.

McCain's daughter Meghan McCain, reacting on Twitter Wednesday to the initial Wall Street Journal report, called Trump "a child who will always be deeply threatened by the greatness of my dads incredible life."

Shanahan, while on his way to South Korea, also told reporters Sunday that he had spoken over the phone with McCain's widow, Cindy McCain, but declined to divulge any details. Shanahan said it was a private conversation, however, that he has not spoken to the President about the matter and that he will be having further conversations with officials about the request when he returns to Washington.

On Friday, Rear Adm. Charlie Brown, chief of Navy information, acknowledged in a statement that a request had been made "to minimize the visibility" of the ship, but noted that "all ships remained in their normal configuration" during Trump's visit.

Shanahan on Sunday also pushed back on a report from The Wall Street Journal that said a tarp was put in place to cover the ship's name since it could not be moved due to repairs, saying the tarp was for "hull preservation and not to obscure the name" so it was removed.

CNN has previously reported that Navy sources provided a similar explanation for the tarp. The tarp came down on the Friday before the President's Monday arrival to speak on a nearby ship in Yokosuka, Japan.

While some sailors had told various outlets they were barred from attending the President's speech, Shanahan said that McCain's crew was not singled out for exclusion or given leave specifically to keep them away. The McCain crew was given a 96-hour Memorial Day weekend leave that Shanahan said was unrelated to the President's visit. CNN previously reported that the USS McCain and other ships had been given shore leave.

Responding to a question from a reporter, Shanahan said Sunday that "there's no room for politicizing the military" -- a point he also made on Friday when asked about the controversy.

Shanahan has said that he asked his chief-of-staff to look into how the request was made to the Navy, but that he is not asking for an independent audit from the Inspector General. He said more information would be revealed once details were gathered about how the request to the Navy was made.

'Much ado about nothing'

"The fact some 23- or 24-year-old person on the advance team went to that site and said, 'Oh my goodness there's the John McCain, we all know how the President feels about the former senator, maybe that's not the best backdrop, can somebody look into moving it?' -- that's not an unreasonable thing to ask," Mulvaney told NBC's Chuck Todd on "Meet the Press."

And during an appearance on "Fox News Sunday," Mulvaney told host Chis Wallace that the staffer behind the request would not be disciplined and said the White House was not concerned about the controversy.

"The President's feelings about the former senator are well-known. The fact that a low-level person might have asked the question shouldn't surprise anybody. We think it's much ado about nothing," he said.