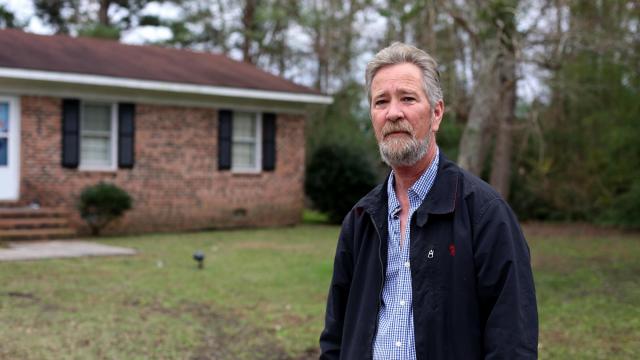 Raleigh, N.C. — The man at the center of a state inquiry into 9th Congressional District election results indicated in a signed declaration last year that he essentially took cash under the table during the 2014 elections to help Bladen County's current sheriff.

McCrae Dowless, who worked this year for Republican congressional hopeful Mark Harris' campaign, as well as for Sheriff Jim McVicker's re-election, said in the declaration that he took $5,800 in 2014 from a Bladen County sweepstakes parlor operator. He said it was cash he needed to pay a team of campaign workers.

Neither Bordeaux nor McVicker returned phone messages Wednesday, but McVicker gave a deposition in the underlying lawsuit and denied any knowledge of the alleged scheme. He said he didn't want Smith's donation and that his campaign manager told him Smith's claims about funneling cash to Dowless weren't true.

"I don't know," McVicker said in the deposition, filed in a lawsuit that followed a raid on Smith's sweepstakes operation. "I'm assuming he's telling me the truth. I hope he is. But I never received any cash from Jeffrey Smith – or checks."

Smith's attorneys told the court in one of their filings that Dowless had access to "several hundred absentee ballots" that "were physically seen and confirmed as votes for sheriff McVicker by Mr. Dowless." Interviews suggest Dowless may have run a ballot-harvesting operation in 2018, sending people door to door to collect absentee ballots, which is illegal.

He has denied this, but two women told WRAL News earlier this month that Dowless hired them to collect ballots. A report released Wednesday by the State Board of Elections and Ethics Enforcement includes a number of statements from people who say Dowless paid them to collect absentee ballots in 2016.

Dowless and his attorney, who issued a statement Tuesday proclaiming Dowless' innocence in an ongoing investigation of 9th District results, did not return phone messages Wednesday. Smith confirmed his statements in a brief interview.

The sworn statements tie back to a federal suit Smith brought in 2016 against McVicker and Bladen County District Attorney Jonathan David over the 2015 raid. A federal judge dismissed that suit last month, but in a pre-trial deposition, Smith said Bordeaux told him during the run-up to the 2014 election that then-Sheriff Prentis Benston planned to raid his operation.

Smith said in his lawsuit that he offered the McVicker campaign a $4,000 check, and then a check from someone else, whom he would reimburse. He said Bordeaux told him the donation's size would stick out in public filings and asked him to give cash to Dowless instead.

"Apparently, (Dowless) had a conversation with – with Landon (Bordeaux), and he was made aware that he needed to come see me," Smith testified. "Landon had already called me and asked me to give it to him, so I knew that that was what was going to happen, and apparently, he must have had a conversation with – with McCrae and told him to come see me, that I would give him the cash."

North Carolina’s ‘Guru of Elections’: Can-Do Operator Who May Have Done Too Much

Smith said in various filings that he later gave Dowless another $1,800 cash, then paid his own employees $600 to work the polls for McVicker. As described, Smith's donations in 2014 would have topped the state limit for political donations. The campaign is also required to disclose such donations.

Those records aren't online, but WRAL News requested them Wednesday from the Bladen County Board of Elections.

McVicker said in his deposition that he never received any campaign donations from Smith but that Smith handed one of his campaign managers a check from a woman from Greensboro or Virginia. McVicker also said his campaign manager wanted him to keep it, "but I made it very clear I didn't want that money."

Dowless said in his statement that he didn't know how the McVicker campaign accounted for the cash he was given.

Bladen County's absentee results are a focus of ongoing inquiries, both by the state elections board and the Wake County District Attorney's Office, that are holding up final results in the 9th District race. Harris seemed to win that race by 905 votes, and he has confirmed to a Charlotte television station that Dowless was hired at his suggestion.

Dowless has a history of absentee ballot and other get-out-the-vote campaigns in Bladen County – for Democrats and Republicans. He worked for a Harris competitor, Todd Johnson, in the 2016 congressional primaries, and Johnson got 221 out of 226 absentee votes cast by mail there.

In the 2018 GOP primary, Harris got 96 percent of the county's mail-in votes despite running against a sitting congressman, Robert Pittenger.

Harris told WBTV in Charlotte recently that a number of Bladen County officials vouched for Dowless' hiring and that he "of course had seen the sheriff was involved and used McCrae."

Smith told WRAL News Wednesday that he met with McVicker in 2014, that McVicker told him his sweepstakes operation existed in a gray area of the law and that he was "only interested in black and white." Smith said he expected the sheriff to call him if he planned to shut down the sweepstakes locations and that he would close them first if the call came.

The state legislature has tried a number of times to outlaw these online gaming operations, with limited success.

Smith filed his lawsuit in 2016 after McVicker and other law enforcement raided his business, claiming among other things that officers maliciously destroyed property during the raid.

Dowless' statement was never filed with the court in that lawsuit, but an attorney on the case confirmed its authenticity Wednesday. The state elections board is aware of it, and Wake County District Attorney Lorrin Freeman said her office recently became aware of it and "will be reviewing it" during its criminal investigation of Bladen County election results.

Both offices are investigating as the state tries to determine whether there are enough questions about absentee ballot results to force a redo in the 9th District election, and potentially in a handful of local elections the state board has also refused to certify. The board recently named Dowless a "person of interest" in that inquiry, and it plans a public hearing to detail its investigation Jan. 11.

Smith told WRAL News, and he has told other news outlets before, that he provided Dowless' get-out-the-vote operation office space ahead of the 2018 primary. Smith said he made Dowless move when he learned he wasn't just working for the Harris campaign, but for McVicker's as well.