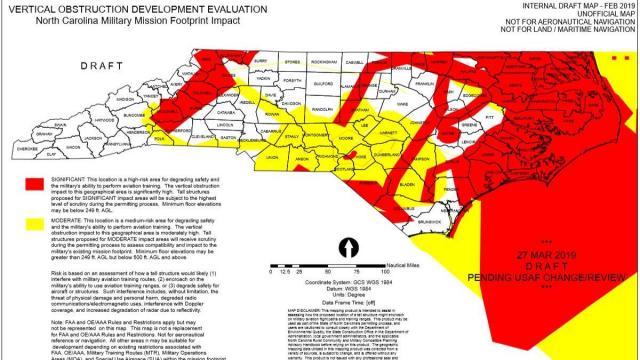 A bill to prohibit wind farms throughout much of eastern North Carolina got an important nod of support Wednesday from the commander of Seymour Johnson Air Force Base in Goldsboro, even as retired military commanders debated the merit of legislation that will likely be one of the more hotly contested issues of this session.

Seymour Johnson's Col. Donn Yates didn't specifically endorse the bill, but he told state senators that he needs "the status quo" to train jet pilots at low altitude in North Carolina. Senate Bill 377 would block windmills across hundreds of square miles in the state, protecting military training runs not only in eastern North Carolina but through a smaller swath of the western part of the state as well.

Supporters said the bill is needed to take a potential complaint off the table the next time the Department of Defense considers closing bases and realigning missions, protecting North Carolina's second largest industry after agriculture: the U.S. military. But the former head of a DOD clearinghouse created to consider this very issue with wind turbines said the measure isn't needed.

An approval process already takes military training needs into account, former executive director of the DOD Siting Clearinghouse Dave Belote told a committee considering the bill. Belote said a wind turbine has never produced a score in the tallies that go into the U.S. government's Base Realignment and Closure scoring system.

Belote is now a consultant working with the renewable sector to sell wind and solar power to the military.

State Sen. Harry Brown pushed back on Belote's analysis. Brown represents a district where much of this training takes place. He sponsored the bill as well as the two-year moratorium on new turbines that passed the General Assembly two years ago and set up the study that led to the map of banned locations.

Local mayors and other officials from areas with bases, several of whom said they have experience flying these training runs from past military careers, backed the bill in committee Wednesday, saying they didn't want to trust the federal government to protect areas around the state's bases.

Frank Bottorff, Havelock's city manager and a former Harrier pilot, said there are "strict limitations" on the military when it comes to blocking wind projects through the clearinghouse. Just because Washington OK's a project doesn't mean local commanders are on board, Bottorff said.

Yates' comments to the committee seemed to back that up. Earlier in the committee meeting a legislative staffer said local military officials told him during the study that some projects "slipped through" the clearinghouse. Yates then confirmed he sent a representative to that study meeting.

"Encroachment is something that is on all of our minds," Yates said.

Wednesday's committee meeting featured retired generals on either side of the issue: retired Lt. Gen. Gary McKissock, who backed Brown's bill, and retired Lt. General John G. Castellaw, who spoke against it.

No vote was taken on the bill, which will be back before the Senate Commerce and Insurance Committee soon. The legislation would block wind farms in red areas of a map created as part the recent study.

There was arguing Wednesday about who actually created that map, with legislators and Gov. Roy Cooper's administration also sparring over why the map was initially posted online, then taken down.

Committee members didn't all have the map Wednesday. Brown, R-Onslow, said they would have a copy in hand before voting on the bill, which refers to the map specifically.