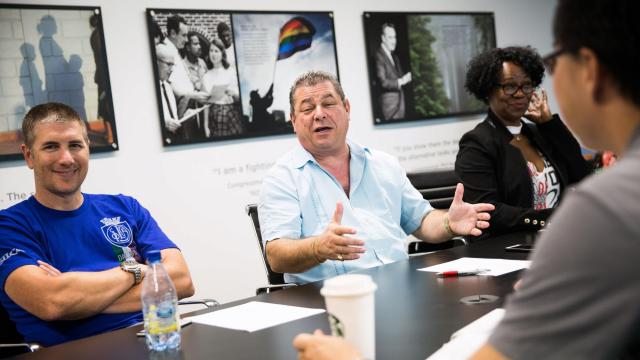 Eric C. Bauman has been a contentious figure from the start as leader of the California Democratic Party. He won after a tough fight with a more liberal competitor — there were shouts of “not my chairman” as he gave his victory speech. And he has been criticized as being an old-school political boss and as too mainstream for a party moving to the left.

But Bauman is now facing the most serious threat to his leadership yet: allegations of sexual harassment and abuse. The anonymous charges, from California Democratic Party staff members, were filed with the party’s leadership by Daraka Larimore-Hall, vice chairman of the Democratic Party.

Larimore-Hall said in a statement Saturday that he had learned of “multiple serious and credible allegations” that Bauman had sexually harassed and in some cases sexually assaulted people at party events. He said Bauman was involved in witness tampering as well.

“I believe the victims,” he said.

Larimore-Hall said he would not name them.

Bauman said in a statement that an outside law firm — Churchwell White, based in Sacramento — had been retained to investigate the allegations.

“A prompt, thorough and independent investigation of the allegations has been undertaken by a respected outside investigator, ensuring these individuals making the charges are treated with respect and free from any concerns of retaliation,” he said.

“I look forward to putting these allegations behind us and moving forward as unified Democrats,” Bauman said.

An aide said that Bauman did not specifically deny the allegations because details of the charges remain unknown.

Some Democrats were quick to call on Bauman to step aside. Rep. Ro Khanna, a Democrat who represents Silicon Valley, called them “shocking” on Twitter.

The uproar came not long after Democrats overwhelmed Republicans in the midterm elections, winning six of the seven Republican-held congressional seats they had identified as targets for flipping. The state party, however, did not play a major role in those battles.

Bauman won his seat by just 60 votes out of 3,000 votes at a party convention in May 2017, in a fight against Kimberly Ellis, a Bay Area activist. That slim margin suggests the chairman may find he does not have a huge reservoir of support as he enters a new fight.