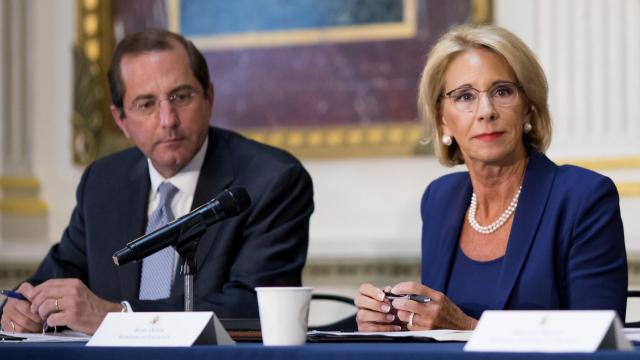 Education Secretary Betsy DeVos unveiled a highly anticipated overhaul Friday of the rules governing campus sexual assault, reducing the liability of colleges and universities for investigating sexual misconduct claims and bolstering the due process rights of defendants, including the right to cross-examine their accusers.

The rules would be the first regulations to govern how schools should meet their legal obligations under Title IX, the 1972 law prohibiting sex discrimination in educational programs that receive federal funding. The regulations will face a 60-day public comment period before they are final.

The regulations mirror a draft proposal first reported by The New York Times in August, which established a narrower definition of sexual harassment, tightened reporting requirements, relieved colleges of the responsibility to investigate off-campus episodes, and outlined steps schools should take to provide support for accusers. They also give schools the flexibility to choose a higher evidentiary standard, establish an appeals process, and offer the option of cross-examination.

“Every survivor of sexual violence must be taken seriously, and every student accused of sexual misconduct must know that guilt is not predetermined,” DeVos said in a statement announcing the regulations. “We can, and must, condemn sexual violence and punish those who perpetrate it, while ensuring a fair grievance process. Those are not mutually exclusive ideas.”

Victims’ rights advocates and Obama administration officials denounced what they saw as an overly aggressive rollback of the steps taken by the previous administration to combat sexual assault on campus.

“We brought this hidden violence into the public eye, and we saw schools change their practices as a result,” former Vice President Joe Biden said in a statement. “These protections made students safer and gave parents peace of mind. Today’s proposed rollback would return us to the days when schools swept rape and assault under the rug and survivors were shamed into silence.”

The most significant changes outlined in the final proposal include procedural mandates that underscore DeVos’ belief that the system shaped by the Obama administration lacks fairness, consistency and due process.

Under the new rules, schools would be required to hold live hearings and would no longer rely on a single investigator model that has become common at colleges. Accusers and students accused of sexual assault must be allowed to cross-examine each other through an adviser or lawyer. The rules require that the live hearings be conducted by a neutral decision-maker and conducted with a presumption of innocence.

Both parties would have equal access to all the evidence that school investigators use to determine facts of the case, and a chance to appeal decisions. Elementary and secondary schools, which are also bound by Title IX, would not have to hold live hearings.

Though the rules were drafted over the past year, they were vetted in recent weeks by the White House and other administration agencies where emotions still ran hot over the fallout from the Supreme Court confirmation hearings for Justice Brett Kavanaugh. President Donald Trump used due process arguments to rally conservatives when his Supreme Court nominee faced allegations of sexual assault, including an episode said to have occurred at Yale. Kavanaugh was ultimately confirmed even after one accuser, Christine Blasey Ford, publicly aired her allegations before the Senate Judiciary Committee in a hearing that all sides considered painful.

“If this proposed rule goes into effect, every single campus Title IX process is going to replicate what happened in the Senate Judiciary Committee against Dr. Christine Blasey Ford,” said Jess Davidson, interim executive director of End Rape on Campus.

Victims’ rights and due process advocates commended the department for including safeguards in the cross-examination requirement. The rules prohibit direct questioning of victims by the defendant, keeping in line with the Obama administration’s recommendation; require cross-examination to occur through a third-party, such as an adviser or lawyer; and include a “rape shield” protection that would keep a complainant’s sexual history off limits.

“There is no better way to test the truthfulness of an accusation than by questioning the accuser during a live hearing,” said Justin Dillon, a partner at the Washington-based law firm KaiserDillon, who has represented dozens of accused students. “If colleges are going to adjudicate what are essentially crimes, then accused students deserve to have the tools to defend themselves effectively.”

But victims’ advocates said the regulation undermined the intent of the sex discrimination law, which is to combat gender-specific discrimination and define sexual misconduct as a means of denying students access to an education.

Several groups said they believed the rules were meant to decrease the number of Title IX investigations on campus and chill sexual assault and harassment reporting. In a summary of its proposal, the department said the rules sought “to produce more reliable outcomes, thereby encouraging more students to turn to their schools for support in the wake of sexual harassment and reducing the risk of improperly punishing students.”

Legal experts say the department appears to be aligning itself with the courts, where a wave of opinions in the last two years have weighed heavily on the side of accused students.

K.C. Johnson, a history professor at Brooklyn College and the City University of New York, said he believed the Education Department sought to institutionalize a recent decision by a federal court. In that ruling, against the University of Michigan, the court said universities must allow students or a representative to directly question their accusers in a live Title IX hearing.

But Terry W. Hartle, a senior vice president of the American Council on Education, which represents college presidents, warned that while schools welcomed clarity from the Education Department on how to properly balance support for survivors and the rights of accused students, colleges and universities were ill-equipped to essentially conduct trials.

“Colleges and universities are not courts, and these sort of proceedings would require us to legalize student disciplinary proceedings,” Hartle said. “We lack the knowledge, the expertise and credibility to do this.” In September, when DeVos announced she would propose Title IX rules, she rescinded nonbinding Obama-era guidelines, which she said “failed too many students” and coerced colleges into setting up “quasi-legal structures.”

The Obama-era guidelines were hailed by victims’ rights advocates for holding colleges accountable for properly addressing rising reports of sexual assault on campuses, but they were nonbinding. Particularly contentious was the encouragement of colleges to adopt a lower standard of evidence — “preponderance of evidence” — in adjudicating cases.

They also applied a broader definition of sexual harassment and maintained a long-standing standard that a school “reasonably should know” of an episode in determining a school’s liability for failing to investigate a complaint. The rules also required schools to investigate any claim of harassment, regardless of where it initially took place.

The new rules would require that institutions only be held legally responsible for investigating formal complaints and responding to reports that school officials have “actual knowledge” of happening. A formal complaint is one made to “an official who has the authority to institute corrective measures.” If a victim opts not to file a formal complaint, the rules encourage schools to provide “supportive measures,” without being penalized.

The new rules would adopt a new Supreme Court definition of sexual harassment as “unwelcome conduct on the basis of sex that is so severe, pervasive and objectively offensive that it denies a person access to the school’s education program or activity.”

The rules also maintain that complaints must involve conduct that occurred in the school’s own program or activity, though the department said that schools should look at factors like whether the harassment occurred at a location or under circumstances in which the school “owned the premises or exercised oversight, supervision or discipline over the location or participants.” The rules would also allow schools to choose the evidentiary standard — “preponderance of evidence” or “clear and convincing” evidence — to apply in determining whether accused students are responsible for alleged misconduct.

In determining whether schools took the proper steps to address the allegations, the department would apply a standard called “deliberately indifferent,” meaning that an institution would be in violation of the law “only if its response to the sexual harassment is clearly unreasonable in light of known circumstances.”