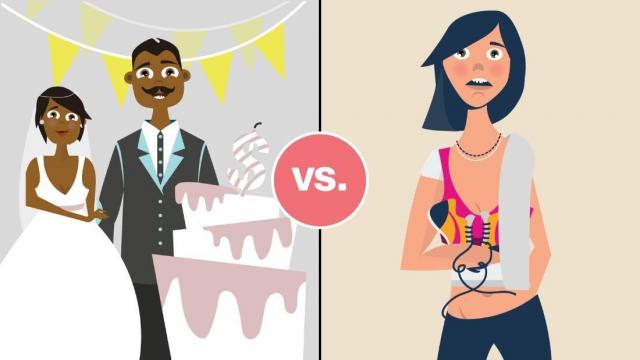 (CNN) — Each year when Valentine's Day approaches, our thoughts turn to love, relationships and coupling.

TEAM MARRIED: In one corner, we have the wedded. According to the US Census, 128.8 million of Americans 18 and over were married in 2016, which translates to 52.7% of the adult population.

TEAM SINGLE: On the other side, we have the unattached, those 18 and over who have never been married, as well as divorcees, widows, widowers and those who're separated. There were 115.8 million single Americans in 2016, which is about 47.3% of the adult population. Forty-nine percent were women, and 45.5% were men.

Note: Obviously plenty of people in long term relationships and civil unions get a little bit of both the married and single world, legally and personally speaking.

When you have a significant other, you have a significant financial advantage: You can pool your financial resources and share the bills. If you both work, and make about the same amount, it can seem like you're getting a 100% raise. One often-cited 2005 study from Ohio State University found married people "experience a per person net worth increase of 77% over singles. Additionally, their combined wealth increases on average by 16% for each year of marriage." Another plus, if one partner loses his or her job, the other's income provides a safety net.

Married couples don't automatically benefit when it's tax time. Depending on income, some are eligible for bonuses and certain deductions where singles aren't, but in certain situations, they are responsible for paying a tax penalty that could eat up a large portion of their combined salaries. For Social Security, one partner can claim a full spousal benefit, which is equal to one half of your husband or wife's retirement benefit.

In their 2013 article for The Atlantic, "The High Price of Being Single in America," Lisa Arnold and Christina Campbell experimented with hypothetical single and married people's finances and discovered the marrieds came out on top over their unmarried counterparts in several key areas.

If you're single, there may be a bit less spending money, but how to spend it is your choice alone. No one can deny your dream of weekly mani-pedis or slam the door on your meticulously decorated fan cave.

Singletons may enjoy more personal freedom with their finances, but if we're talking hard numbers, being married is usually an advantage.

Married people seem to reap more health benefits. Being married may significantly improve the likelihood of surviving cancer, according to a 2013 study from the Journal of Clinical Oncology. Coupled cancer patients were also 17% less likely to see their cancer spread.

They have a lower risk for heart problems as well, says a 2014 study from the American College of Cardiology. Researchers there screened 3.5 million adults for cardiovascular problems and found that those who were married had less heart disease and healthier blood vessels throughout the body than people who were single, divorced or widowed.

Couples and families sharing a plan are sometimes able to pay toward the same annual deductible, which would make benefits coverage kick in faster, saving money.

What about health and happiness?

The takeaway from these advantages relies on whether the couples had happy marriages. Stress and depression resulting from unhappy partnerships can adversely affect health, an issue singles don't have to face. Researchers from the University of Utah found in 2009 that middle-aged women in unhappy marriages showed risk factors for heart attacks and diabetes.

If you're single, you may be more motivated to get in shape to look attractive for potential mates.

Research published in 2013 from Southern Methodist University correlated weight gain and marriage satisfaction in early marriage (newlyweds were more likely to gain weight if they were happy).

Marriage is good for your health, but only if it's a healthy marriage! Plus, single people may avoid some of the bad health habits that come from settling down.

No surprise here that married people have sex more often than singletons. Data compiled by Statista from the Journal of Sexual Medicine in 2009 shows that 71.32% of married people over 18 reported they had had sexual intercourse in the past 90 days.

Only 11.32% of unattached people said they had "done the deed" during that time.

Marriage does have its built-in benefits ;)

When you're single, you usually don't have to deal with a partner who hogs the bed or steals the covers. The Better Sleep Council found that 26% of the coupled people they surveyed in 2012 got a better night's sleep when they slept alone.

What about the quantity of sleep?

It seems like many people aren't getting enough sleep anyway, no matter what their relationship status is. Data from the CDC shows that almost one-third of American adults aren't getting the recommended seven hours of sleep each night, and single mothers are getting even less. The study found that 43.5% got less than seven hours. Adults either without kids or without kids at home got a few more winks closer to the right amount, where 29.7% had fewer than seven hours.

Perhaps a snoring partner is the culprit for some of this lack of sleep. A 2015 survey from the American Academy of Dental Sleep Medicine found "40% of women claim snoring in the opposite sex is a turn-off, and nearly one in 10 Americans went so far as to admit that snoring has hurt at least one of their romantic relationships."

Snoring regularly affects 37 million sleepers. For singletons, snoring probably isn't as much of an issue -- and every night doesn't feel like an eternity.

No one hogging the bed, no one keeping you up, and no kids to barge in? Single life is sleep life.

Ready to cross over to the other team? Getting hitched can really add up, for all concerned.

The national average cost of a wedding in 2016 was at an all-time high of $35,329, according to The Knot.com. Those not saying "I do" aren't necessarily off the hook either. The average cost of being a guest at a wedding in 2016 was $738 for men and $472 for women. However, out-of-town travel, gifts and suitable attire can certainly drive up the cost. Doesn't hurt to pray for an elopement.

No one's forcing you to spend major cash on a wedding. We hear backyard celebrations are totally in.

Everyone knows the stereotype of the lonely spinster with a gajillion cats, but according to the numbers, families have more critters.

Granted, partnerships between pets and singles are growing. Results from an American Veterinary Medical Association study indicate the percentage of single adults with pets grew from 46.9% to 54.7% from 2006 to 2011. Families with pets grew from 65.5% to just 66.4%. Pets trigger health benefits that help everyone, such as decreasing blood pressure and cholesterol. They help ease loneliness and even provide chances to meet new (human) friends and dates. To the dog park!

When it comes to pets, everyone wins!

Sometimes there's just not a number

Unfortunately, statistics are elusive for some valuable benefits of being single or married; however, they're still worth noting.

One partner in a couple can be the resident bug swatter. Couples can enjoy the perks of trading off designated driver duties after a night out on the town, as well as nab a spot in HOV multiple-occupancy highway lanes. If you have a partner, you don't have to worry about facing an amusement park ride by yourself, since those tiny little cars usually come in sets of two.

But, if you're single, you never have to wrestle for control of the remote or run every financial decision past someone else. You still get to have awesome relationships with friends and family, and if you get that dream job across the country, you're probably a lot more mobile.

It's really all a matter of perspective, isn't it? This Valentine's Day, let's concentrate on the most important love story of all: The one you have with yourself, no matter your marital status!