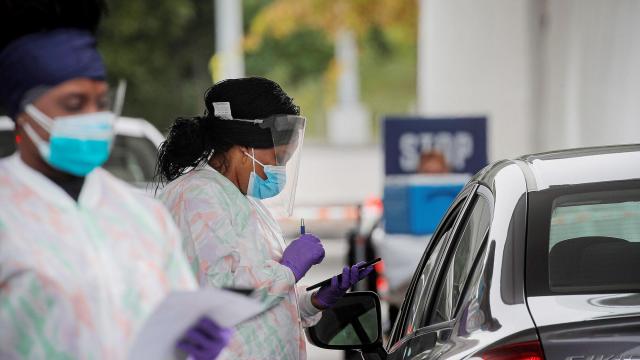 The state reported 27 deaths Wednesday, and 21 more people had died as of Thursday afternoon.

It also reported its highest-ever number of Covid-19 hospitalizations Wednesday -- more than double the numbers seen in late August, when they were in the high 200s, Covid Tracking Project data shows.

More than half of Wisconsin's 72 counties -- 45 -- are experiencing a "very high" Covid-19 activity, with more than 350 cases per 100,000 people, Andrea Palm, the secretary-designee for the state health department, said Thursday.

The White House coronavirus task force recently warned Wisconsin of a "rapid worsening" and an "intense period of viral surge," and urged the state to increase social distancing as much as possible. That warning came ahead of President Donald Trump's planned rallies this weekend in the hotspot area of Green Bay.

A planned rally in another hotspot, La Crosse, was moved to Janesville. Trump's campaign said the move had nothing to do with the pandemic.

Teachers' unions in the state are requesting that virtual learning be implemented for kindergarten through college students across Wisconsin, according to a news release from the Milwaukee Teachers' Education Association.

Leaders in states across the country are sounding alarms about rising Covid-19 cases that experts say could foreshadow a coming surge.

In New York, several Covid-19 clusters have created 20 "hotspot" ZIP codes -- many in New York City -- that have an average test-positivity rate of about 6.5%, the governor said Thursday.

"An infection today can become a cluster tomorrow," Cuomo said.

Leading health officials including Dr. Anthony Fauci, the director of the National Institute of Allergy and Infectious Diseases, have also warned that the US could see an especially challenging fall and winter this year, as social settings move indoors during cold weather. They say cities and counties should prepare by keeping safety measures -- such as wearing masks and social distancing -- in place.

"We are still knee-deep in the first wave of this," Fauci said in a Facebook and Twitter livestream.

In Kentucky, Gov. Andy Beshear on Wednesday urged the state to halt a recent "escalation" of cases after reporting more than 1,000 new infections for the second day in a row.

"Today's daily report is too high," the governor said. "I need your help. It's up to us and we've got to get this done."

And in Illinois, the governor is tightening restrictions in one part of the state after an increase in positivity rates.

As of early Thursday, at least 27 states were reporting higher seven-day averages of new daily cases than a week ago, according to data from Johns Hopkins University. Nationwide, more than 7.2 million people have been infected and more than 207,000 have died.

The city reopened middle and high schools Thursday, after doing so for elementary schools Tuesday. On Wednesday, the city started allowing indoor dining at restaurants at 25% capacity.

The city's health department announced an order Thursday giving all city agencies, including the police and fire department, the power to close businesses that have repeated violations of city and state Covid-19 safety requirements.

The president of a New York City teachers' union said Thursday he would demand school closures if cases in those ZIP codes don't decline.

"If those numbers don't come down, this is where it's going to end up in a bit of a fight," Michael Mulgrew, president of the United Federation of Teachers, said. "And if that means we have to go to court or do something else, we will."

De Blasio said Thursday he would watch to see whether school shutdowns are necessary in hotspot neighborhoods, but added that schools have so far seen "relatively few" Covid-19 cases.

One building -- a special education school with 262 students in Queens -- has been closed for two weeks because of cases there. A few other schools have been closed for a day, he said.

Otherwise, "with a school system that's going to have up to 500,000 kids in person this week, and well over 100,000 teachers and staff in buildings, we're seeing relatively few cases each day," the mayor said.

The city is trying to enforce rules such as mask mandates, and those who don't follow them are subject to fines or, in the case of businesses, closure, de Blasio said.

Consider isolating if you lose sense of smell or taste, researchers say

Loss of smell and taste are a strong sign that someone is infected with Covid-19 -- and people who lose either should consider isolating even if they have no other symptoms, according to research published Thursday.

"Our findings show that loss of smell and taste is a highly reliable indicator that someone is likely to have Covid-19, and if we are to reduce the spread of this pandemic, it should now be considered by governments globally as a criterion for self-isolation, testing and contact tracing," said Rachel Batterham of University College London and University College London Hospitals, who helped lead the study team.

The team studied 590 volunteers who experienced a new loss of smell or taste. They tested 567 of them for coronavirus.

Of the 567, more than 77% tested positive for SARS-CoV-2 antibodies. In total, 80.4% of participants reporting smell loss and 77.8% of those reporting taste loss had a positive test result, the team reported in the journal PLoS Medicine.

Nearly 40% of those who tested positive for antibodies had neither a fever nor a cough.

The study recruited its volunteers between April 23 and May 14, 2020, during the peak of the Covid-19 outbreak in London. It does not include a comparison group of people who did not lose their sense of smell and/or taste.