The message came with an added sense of urgency because a deadline for a cooperative agreement to be signed by all the interested parties is only three days away.

The event was held at Fayette Place, an abandoned, dilapidated site that was previously used for public housing.

The total estimated cost of the light rail is at least $2.5 billion, and planners hope to receive a mix of funding from local, state and federal sources.

The light rail line would stretch 18 miles from UNC Hospitals in the west to the campus of North Carolina Central University in the east, with 12 proposed stops along the way. But for the line to become reality, Duke University must donate land where the line would cross its campus. 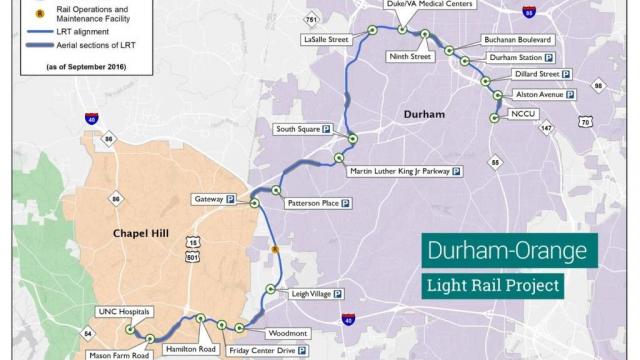 Last year, Duke officials indicated that university officials were concerned about the impact the project will have, including road closures that were needed to accommodate the project.

The light rail is on a tight schedule and the goal is to identify all local and federal funds by next fall and break ground sometime in 2020.

Organizers said they chose Fayette Place because planners envision it being one of the places that the light rail system would serve once it is up and running.

And city officials believe it would significantly help the city's most vulnerable residents, including those who live in public housing.

For this project to move forward, Duke needs to provide a parcel of land, but university officials have expressed some concerns about the project, particularly the rail's impact on the hospital.

GoTriangle officials say they hope Duke officials will get on board by the end of February for the cooperative agreement to be signed, which indicates a willingness to work with the transit agency.

During the Monday press conference, speakers said the rail would provide access to jobs while also creating new jobs that Durham Tech students would be prepared to apply for.

"These (new) jobs will raise the poverty line, giving a brighter future to the existing adult population and especially the children they raise," Scott said.