Research Triangle Park, N.C. — Several prominent business leaders from North Carolina are backing a bi-partisan bill in the U.S. Senate that would cut dramatically the tax rate on corporate profits made overseas.

If companies increase the number of employees, the rate would be cut even more under legislation introduced by Sen. Kay Hagan, D-N.C., and John McCain, R-Ariz.

Bringing the profits back to the U.S. is called repatriation.

The rate on repatriated profits would drop to 5.25 percent if a company’s payroll expanded during 2012, according to a summary of the bill released by Hagan’s office. The current top corporate rate is 35 percent.

To qualify for the lowest tax rate, a company would have to increase its payroll by 10 percent as measured by additional workers or higher employee pay. (Read details from the bill here.)

"At a time when our country’s economy needs a shot in the arm and our federal government can no longer afford stimulus funds, American businesses stand ready to step up and inject $1 trillion trapped overseas by punitive federal tax law,” Duke Chief Executive Officer Jim Rogers said.

Rogers has spoken out in favor of a lower rate for several months, as have other executives such as Cisco CEO John Chambers. Cisco maintains its second largest corporate campus in Research Triangle Park.

"Duke Energy alone has $1.2 billion held hostage overseas by our tax system that penalizes U.S. businesses that want to bring their foreign earnings to America to create jobs,” Rogers added.

“By passing the Foreign Earnings Reinvestment Act, we can bring that money home to create jobs and support and accelerate our capital program investments in smart grid technology, retire and replace older coal plants, and build natural gas and renewable generation.”

“Current U.S. tax rates penalize global companies if they want to bring those earnings back to the U.S., subjecting them to a 35 percent tax rate,” Gillings said at a press conference at Quintiles’ global headquarters in RTP on Friday. “So, instead of bringing those earnings home where they could be employed for innovation, job creation and economic growth, they often remain stranded overseas.”

Quintiles is the world’s largest life sciences services firm, operates in 60 countries and earns nearly half its profits outside the U.S., Gillings said. 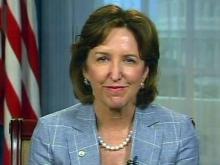 Other executives at the event included:

If the bill passes, Quintiles said earnings that were returned to the U.S. could be used for:

Hagan sees bill as way to “put people back to work”

“I want to use every tool in the toolbox that’s at our disposal to help our economy and put people back to work,” Hagan said in an interview on Bloomberg Television on Thursday.

Duke Energy is a member of the WIN America Coalition, a group of multinational companies lobbying for a tax holiday on as much as $1.4 trillion in offshore profits. WIN America campaign manager Karen Olick called the Hagan-McCain proposal “a critical step forward in the effort to jump- start our economic recovery.”

Cantor said the measure was “the latest evidence of bipartisan support for repatriation and I applaud their effort.”

“I hope that Congress can act quickly so that the president can sign repatriation legislation that will take effect this fall,” Brady said in a statement.

Senate Majority Leader Harry Reid said Thursday that the proposal from McCain and Hagan won’t pass the Senate as a stand-alone bill and must be coupled with infrastructure improvement provisions.

“It won’t just be simply repatriation,” the Nevada Democrat said. Corporate tax holiday legislation “will be part of an infrastructure program,” Reid said in an interview. He declined to provide details.

Independent studies showed that when a tax holiday was last offered in 2004, the lower tax rate for returning profits spurred little hiring or domestic investment. Most of the money was used to buy back stock. Democrats have said they are concerned that could happen again with a tax holiday.

Under the Hagan-McCain proposal, if a company repatriates profits and then reduces its staff, it would be required to add $75,000 to its gross income for every position eliminated.

That differs from Brady’s legislation, which would require a company to increase its taxable income by $25,000 for every position cut. Brady’s bill would allow companies one year to repatriate offshore profits at a tax rate of 5.25 percent.

The congressional Joint Committee on Taxation has estimated that a tax holiday would cost the Treasury $78.8 billion in forgone revenue over 10 years if the money was brought back to the U.S. at a tax rate of 5.25 percent.

Tax attorney H. David Rosenbloom said that adding to a company’s gross income, as the Hagan-McCain proposal does, may be friendlier to business than adding to its taxable income because it provides more chances to whittle down a tax liability through the use of deductions and credits.

“Generally, the higher up on a tax form the number appears, the more opportunities there are, the more things that can occur," said Rosenbloom, a partner at Washington-based Caplin & Drysdale Chartered and director of the international tax program at New York University’s law school.

Rosenbloom said lawmakers were embarrassed following the 2004 repatriation when some companies that participated in the tax holiday eliminated jobs.

‘‘This is basically to keep Congress from getting caught red-faced again,’’ said Rosenbloom.

Critics point to the similar corporate tax holiday in 2004. Independent studies showed much of that money went to buyback stock.

Edwin McLenaghan with the North Carolina Budget and Tax Center wonders what companies are doing with the $2 trillion their currently sitting on in the U.S.

“When they’re not investing what they already have, there’s no evidence that having another trillion on hand is going to increase the incentive to invest in the American economy,” McLenaghan said.

Chuck Marr, director of federal tax policy at the Washington-based Center on Budget and Policy Priorities, which advocates for low-income people, said the Hagan-McCain proposal contains no incentives to create jobs.

A coalition of businesses, including United Parcel Service Inc. and Boeing Co., which are lobbying Congress for a lower corporate tax rate, did not comment directly on the Hagan-McCain proposal.

‘‘We view the repatriation issue as something that should be considered within the context of a comprehensive reform of the corporate tax system,” Jim Pinkerton, co-leader of the RATE Coalition, said in a statement.

Two other measures that address repatriation are pending in Congress. Legislation proposed by Representative Shelley Berkley, a Nevada Democrat, would let companies bring home offshore profits at a 25 percent tax rate, and lower if they increase their payrolls.

Sen. Mike Lee, a Utah Republican, has proposed an amendment to a currency bill now being considered that would lower the tax rate for returning profits to the U.S.

Bloomberg contributed to this report.