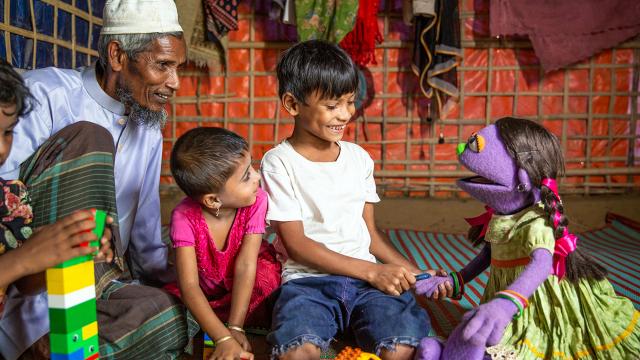 CNN — Rohingya children raised amid political turmoil have few opportunities to see themselves represented in the media. Sesame Workshop is helping to change that.

The siblings will be featured in Rohingya-language educational media along with such familiar characters as Elmo.

Rohingya children will recognize themselves in the Muppets, who live in a refugee camp in Bangladesh and are surrounded by the same culture, traditions, and language as they are.

"Noor and Aziz are at the heart of our efforts to bring early education and learning through play to children and caregivers affected by the Rohingya refugee crisis, who have been impacted tremendously by the dual crises of displacement and the Covid-19 pandemic," Sherrie Westin, president of Social Impact, Sesame Workshop, said in a statement.

Rohingya children in refugee camps will be able to watch how Noor and Aziz use laughter and creativity to learn, play and support each other in efforts to provide critically needed early education to families in Cox's Bazar, Bangladesh, according to a news release from Sesame Workshop.

Cox's Bazar, the world's largest refugee camp, is home to more than 800,000 Rohingya refugees, more than half of whom are children, the release said. These refugees fled Myanmar to escape a violent military crackdown, bringing with them allegations of indiscriminate killing, rape and property destruction.

Since 2016, there have been reports of a campaign of mass violence by Myanmar's military in the country's Western Rakhine state, specifically targeting the Muslim minority Rohingya. Human rights groups have accused Myanmar of genocidal acts. But the government has denied such accusations, claiming that the displacement of the Rohingya community is a necessary and legitimate counterterrorism measure.

Sesame Workshop hopes that Noor and Aziz will bring much needed hope, laughter and education to Rohingya children languishing in camps.

"Rooted in the rich Rohingya culture and informed by extensive research and input from Rohingya families, Noor and Aziz will bring the transformative power of playful learning to families at a time when it's needed more than ever before," Westin said.

Noor, whose full name is Noor Yasmin, is a curious girl who loves to analyze the world around her and come up with funny rules for games she plays with her friends and family. The confident 6-year-old loves asking questions and finding ways to solve problems.

Her brother, Aziz, is a natural storyteller who uses his imagination to create and act out stories, complete with characters like kings, queens and various animals. Aziz also loves to help out his friends and family and relies on his sister for love, laughter, and support.

These new Muppets are part of Sesame Workshop's Play to Learn humanitarian program, in partnership with the LEGO Foundation, New York University's Global TIES for Children, the Bangladeshi development organization Base Realignment and Closure and the International Rescue Committee.

This is not Sesame Workshop's first initiative aimed at helping refugees. Last year, Sesame Workshop and the International Rescue Committee joined forces to help Syrian refugee children through educational learning programs, including the launch of a new "Sesame Street" show in Arabic.