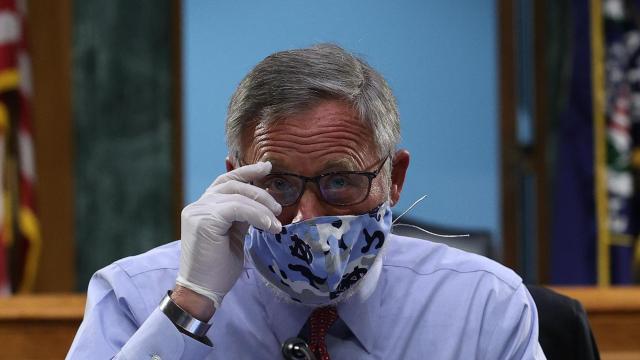 EDITOR'S NOTE: Jesse Wegman is a member of the New York Times editorial board, where he writes about the Supreme Court and national legal affairs. He is the author of “Let the People Pick the President: The Case for Abolishing the Electoral College.”

Seriously, just wear one. Almost any mask will do, really. N95, surgical, spandex, homespun cotton. For people who aren’t front-line health care workers, what matters is whatever you can get your hands on that fits over your nose and mouth.

As the nation plunges for a second time into the depths of this brutal pandemic, officials worry we’ll soon have as many as 100,000 new cases every day. Summer won’t save us.  Neither will bluster or bleach.

It’s easy to want to give up, but it would be wrong. Wearing a mask is not only simple and cheap, it’s also proved to be effective in slowing the virus’ spread. It will protect the health and even save the lives of your loved ones, your neighbors and people you don’t know.

This isn’t hard. If the lower half of your face is not covered when you go out in public, stop searching for excuses and go mask up. Think about it as good hygiene and common courtesy.  Would you sneeze into your hand and then not wipe it off before shaking the hand of person standing next to you?  Of course not.  So why wouldn’t you wear a mask?

Or think about it as the best path to economic recovery. If all Americans were required to wear masks in public, we could reduce the number of daily cases to a level that would otherwise require lockdowns that would slash nearly 5%, or $1 trillion, from the nation’s gross domestic product, according to an analysis released this week by Goldman Sachs.

But please, just don’t think about it as so many Republicans do. “Mask-wearing has become a totem, a secular religious symbol,” Alex Castellanos, a longtime Republican strategist, told The Washington Post. “Christians wear crosses, Muslims wear a hijab, and members of the Church of Secular Science bow to the Gods of Data by wearing a mask as their symbol, demonstrating that they are the elite; smarter, more rational, and morally superior to everyone else.”

This is a bizarre way to talk about people who are guided by facts, science and reason. It’s not about making a political point or asserting moral superiority; it’s about saving lives and protecting one another — which should be a basic element of citizenship in any democracy.

And yet, like so many seemingly nonpolitical topics, donning a mask has become partisanized to the point that people are brawling in supermarkets over their right to infect others. “It’s a free country; I can do what I want” sounds charming when it comes from a child.  It can be far worse when it is shouted from the mouth of a possibly infected adult.  It’s a strange sort of freedom that includes exposing other people to a potentially deadly virus.  What’s to resist about showing respect to your fellow Americans?

Why turn a straightforward public health issue into a political one?  The virus doesn’t care whether you’re a Republican or a Democrat.  It ravaged blue states in the spring, and now it’s plowing through red ones.  All it cares about are finding open mouths and nostrils.  It’s crazy that we are having this debate after all. Dozens of countries have already mandated mask-wearing in public.  It’s not a coincidence that the United States remains the world’s coronavirus hot spot.

Only recently — as the virus descends on the places where their political supporters live — have some top Republicans come to their senses. On Thursday, Gov. Greg Abbott of Texas, whose state is currently being overwhelmed with new cases, issued a statewide mask mandate.  (Indoor churchgoers are exempted, but outdoor protesters aren’t.)

There have been encouraging words from the Senate majority leader, Mitch McConnell, Vice President Mike Pence, even Sean Hannity. Earlier this week, Steve Doocy, a host of “Fox & Friends,” which has as direct a line to President Donald Trump’s brain as any top White House adviser, pleaded with the president to “set an example” and wear a mask.

M-A-G-A should now stand for “Masks Are Great Again,” he said. We’re not holding our breath.  Even with records being set daily, the White House refuses to issue a nationwide face mask mandate.

Some resisters are still sore about the contradictory or incorrect messages about masks that came from health officials in early days of the pandemic. In late February, Surgeon General Jerome M. Adams tweeted: “Seriously people — STOP BUYING MASKS!  They are NOT effective in preventing general public from catching #Coronavirus.” 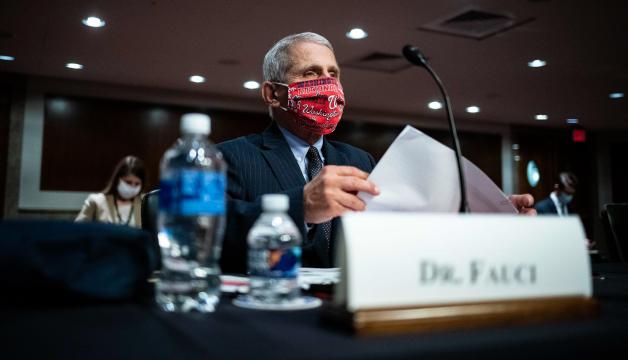 Anthony Fauci said a version of this a few days later. “There’s no reason to be walking around with a mask,” he told CBS.  “When you’re in the middle of an outbreak, wearing a mask might make people feel a little bit better and it might even block a droplet, but it’s not providing the perfect protection that people think that it is.”

These were missteps, without question. But remember the context in which those pleas were made.  In early March, hospitals across the country were preparing for a massive surge of patients, and masks were in perilously short supply.  Considering the significant risks to front-line health care workers, and the lack of sufficient protective gear, it was understandable — even if misguided in retrospect — to want to ensure that masks were available to those who needed them most.

(By the way, why, in the richest country on the planet, was there such a glaring shortage of masks? It’s not as though the mask-makers didn’t see what was coming.  One executive at a Texas medical supply company warned the Trump administration back in January that he was getting deluged with orders from abroad.

He offered to produce as many as 1.7 million N95 masks per week for the federal government. The administration declined.)

There’s also the uncertainty inherent to the scientific process. In the early stages of the pandemic, for instance, it wasn’t clear that infected people who had no symptoms could transmit the virus, so there didn’t appear to be a need for the general public to wear masks. Now, of course, it’s clear that asymptomatic transmission most likely plays a big role in the virus’ spread.

This doesn’t mean we should ignore the scientists, or accuse them, as Fox News’ Laura Ingraham did, of being part of “the medical deep state.” Scientists generate hypotheses based on what they know at the time; some turn out to be incorrect, so scientists adjust and come up with better hypotheses.  That is how science works, and most of the time it happens out of the public view.  But now, with the whole world watching and on edge, every error is magnified.

In any case, it’s long past time to stop blaming health officials’ messaging. The Centers for Disease Control and Prevention updated its guidance to recommend the wearing of masks on April 3; three months later, countless Americans are still refusing.

Masks are not a cure-all for the coronavirus pandemic. Countries that have gotten the virus under control have done so through a robust public health response, including aggressive testing and contact tracing.  We also need to properly fund research into vaccines and other treatments.

Instead, the Trump administration has wound down its coronavirus task force, perhaps because Trump still seems to believe that, as he put it as recently as Wednesday, the virus is “going to sort of just disappear, I hope.” The buck stops anywhere but here.

And all this time we thought the presidency was a bully pulpit. Alas, the leader of the free world still refuses to cover his face in public, although he did claim he was “all for masks” earlier this week.

The way to deal with an abject failure of leadership like this is at the ballot box in November. But the way to deal with the pandemic’s daily assault on America today is to do the things regular people can do with little to no effort:  Wash hands regularly, practice social distancing and wear a mask.

Consider it the least you can do for your country.