How Trump's decision unfolded to kill a top Iranian general 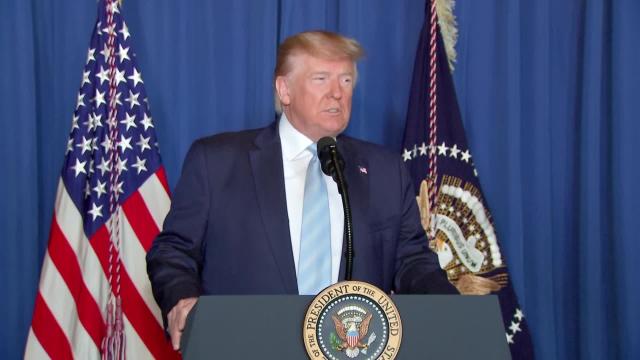 CNN — President Donald Trump had been weighing the biggest risk of his presidency for days.

Inside ornate Mar-a-Lago suites commandeered as makeshift situation rooms, Trump hosted top advisers and certain friendly members of Congress on Tuesday to discuss a strike taking out the commander of Iran's security and intelligence services.

In between rounds of golf and dinners with his family over the next 48 hours, he was updated on specific intelligence showing multiple threats to Americans from Iran in the region -- and on the expected movement of Qasem Soleimani to Baghdad, where he was taken out by an American drone on Thursday.

Top advisers and military brass also sought to offer Trump a view of what the kill might mean for the region, for the United States and for his presidency.

For Trump -- a president wary of war who promised to end American conflicts overseas -- the strike marked a inflection point in a long-simmering standoff with Iran that will undoubtedly lead to further confrontation.

There was serious debate within the administration leading up to the strike, officials familiar with the matter said, describing an overarching concern that killing Iran's military leader would lead to dramatic and unpredictable escalation.

"Everybody is concerned about the next steps," one official said.

The morning after the strike, Trump abandoned plans to play a round of golf and instead spent time surveying his orbit of advisers on the kill order. He was defiant, according to some of the people he spoke with, and defensive. But he also appeared to be freshly aware of the gravity of his role and the power he wields, unsure of how Iran would respond.

As he delivered a mid-afternoon statement from a gold-trimmed ballroom Friday, Trump wore the weight of the decision.

"We took action last night to stop a war," he said, reading carefully from a teleprompter, as he sought to allay concerns he was dragging the United States into another bloody conflict in the Middle East. "We did not take action to start a war."

Trump's immediate predecessors both decided against targeting Soleimani, deeming his death at American hands a likely trigger for unpredictable escalation that would only mire the US more deeply in the Middle East.

For Trump, however, the decision reflected a more immediate victory, one that he touted in his conversations over breakfast and over the telephone from his Florida estate Friday. It was a moment to compare himself favorably with the men who previously occupied his office without necessarily publicly weighing what comes next. And it changed the subject, however briefly, from his impeachment.

"He should have been taken out many years ago!" Trump declared on Twitter, describing the man -- who four years ago he seemed entirely unfamiliar with during a radio interview -- as "hated and feared within the country."

As he has been for multiple critical foreign policy moments of his presidency, Trump oversaw Thursday's strikes that took out Soleimani from his Florida retreat.

At the club when news broke

As news broke that the US struck and killed the commander of the Quds Force of the Islamic Revolutionary Guards Corps, Trump was dining at his Mar-a-Lago club, surrounded by old friends and more recent ones, such as House Minority Leader Kevin McCarthy. Several of his children were also on the property, along with son-in-law Jared Kushner, on the last few days of Trump's extended holiday vacation.

Trump was seen exiting a secure briefing room at Mar-a-Lago around 6 p.m. ET, a person familiar with the matter said, surrounded by agents and aides. An official familiar with the matter said Trump was updated by aides throughout the evening as the strikes in Iraq proceeded. National security adviser Robert O'Brien was seen at the club around the same time, and later he told reporters he had been with the President when US commanders sent notification that the operation had concluded.

"It was something that had been going on for several days, and the President made the decision that we had to move and take action to protect Americans," O'Brien said.

"I would describe the President's mood as very focused," Rep. Matt Gaetz, a top Republican ally who spent Thursday evening with Trump, during an interview on Fox News. "I think he was really dialed into the ways in which Soleimani was planning to kill Americans, to harm our diplomats and to throw the entire region into civil war."

Howie Carr, the conservative author and radio host, was on Mar-a-Lago's dining patio on Thursday evening when Trump beckoned him over, he recalled in a column for the Boston Herald. Carr characterized Trump's mindset as "cool, calm and collected" -- and said Trump was more interested in discussing the forthcoming election year.

In photographs posted by McCarthy following the strike, Trump is seen on his dining patio across from Dan Scavino, his social media director, who helped Trump post his early response to the strike: a low-res image of the American flag.

As meatloaf and ice cream were served, the Pentagon confirmed that the US was behind the strikes, the only statement from the administration throughout the evening.

The scene was similar to the one after he gave the order for American forces to carry out a missile strike on a Syrian airfield in the spring of 2017. After that, Trump went into great detail about the chocolate cake he had with Chinese President Xi Jinping, who was in Florida for a summit, when he informed him about the series of tomahawk missiles.

The strike against Soleimani amounts to a far riskier move, one that most US officials believe could lead to a response from Iran. Already, Democrats in Congress have cried foul at not being briefed ahead of the strike, though administration officials were spending Friday updating lawmakers.

Prior to the strike, White House lawyers -- in consultation with national security officials -- put together a "strong rationale" claiming that the strike against Soleimani would not lead to war and that the President, as commander in chief, had the authority to not ask for congressional authorization over a matter of self defense, an administration official said.

Discussions between Trump and senior members of his national security team about a strike to remove Soleimani had been underway for months, according to people familiar with the plans, though they were not acted upon until this week.

But it wasn't until earlier this week when Trump met with top officials at his Florida estate that it became clear this would be the moment for the strike.

Trump summoned Secretary of State Mike Pompeo, Defense Secretary Mark Esper and Gen. Mark Milley, the chairman of the Joint Chiefs of Staff, to Mar-a-Lago in the late afternoon on Sunday, ostensibly to be briefed on a mission that took out members of an Iranian-controlled militia in Iraq.

The group took a government plane from Washington, arriving in West Palm Beach just after 4 p.m. ET and traveling directly to the President's estate nearby. Huddling in the secure room that's been set aside at the club for classified national security matters, the team updated Trump on the Sunday strikes, spelled out the continuing specific threats from Iran and ticked through his options for additional actions -- including the dramatic step of taking out Iran's top security and intelligence commander, who the officials told Trump would be traveling in the upcoming week.

Over the next several days, Trump would raise the plans with some of his confidants, including South Carolina Republican Sen. Lindsey Graham, who visited Florida at the start of the week and said he was included in briefings on the subject.

"I was briefed about the potential operation when I was down in Florida," Graham said on Fox News Friday morning. "I appreciate being brought into the orbit."

As he entered a New Year's Eve gala in a tuxedo, Trump offered no hints of what was in the works and insisted he was not interested in war.

"I don't think that would be a good idea for Iran," he said. "It wouldn't last very long."