Four Oaks, N.C. — Authorities shut down all northbound and southbound lanes of Interstate 95 between exit 81 and exit 97 in Johnston County Wednesday afternoon due a series of crashes, including one involving a truck hauling chemicals.

The fiery wreck happened around 1:45 p.m. near mile marker 95 when a 35-foot RV rear-ended a tractor-trailer, authorities said. Heavy smoke and flames could be seen from the crash and the truck was still burning late Wednesday night.

At least one person was killed in the crash, authorities said.

Authorities would not say what type of chemicals the truck was carrying, only that it contained a "solid corrosive." Emergency workers decided to stand back and let the fire burn itself out.

"That tractor trailer had some corrosive material in the back that became engulfed in flame, which caused a plume of smoke," said Lt. Jeff Gordon with the North Carolina Highway Patrol.

Those who were evacuated, or were forced to abandon their cars on the highway, were initially sent to the First Baptist Church of Smithfield but were relocated to Princeton High School and Cleveland High School. 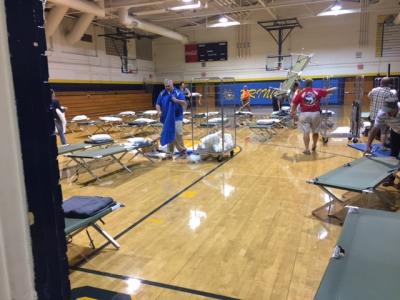 With the shelters opening at a moment's notice, supplies had to be brought in to care for everyone. Volunteers unloaded water and other drinks but, depending on how long people have to stay at the shelter, the next consideration is food.

“It’s been a night. Last week it was Matthew. This week, this ain’t Matthew but I don’t know what you call this,” said Smithfield resident Mary Vinson.

Johnston County Emergency Management staff registered everyone who came into the shelter, getting their names and any special needs they might have.

Many people whose vehicles were still on I-95 said North Carolina was not their destination; some were heading to South Carolina or Florida. Late Wednesday night, most were just wondering when they could return to their vehicles and their homes.

“I’m really ready to go home because I have to go to work in the morning,’ said Smithfield resident Bryan Vinson

Many businesses along Highway 301 were shutting their doors Wednesday night and closing early as a result of the evacuations and police were blocking streets in some areas.

“They sat there and explained that they were going to close the restaurant down due to the chemicals. They didn’t know what type of chemicals was in the truck,” said Smithfield resident Rick Vanover.

Residents who live within a two or three-mile radius of exit 95 on I-95 were advised by authorities to remain in their homes, close and lock all exterior windows and doors and turn off air conditioning systems. They were told not to go outside until being told that the area is safe or are told to evacuate. All pets should be brought inside, officials said.

Hospitals, assisted living facilities and other facilities with special populations are advised to remain in place and shut all air handlers, exterior vents, windows and doors.

Wednesday night, Johnston County Schools announced that the district would operate on a two-hour delay Thursday due to the hazardous materials and "accompanying toxic cloud" that were the result of the crash. School officials said the decision came at the recommendation of the Johnston County Emergency Management System and would afford additional safety to students and staff.

Johnston County government offices will also operate on a two-hour delay Thursday and classes at Johnston Community College will be delayed until 11 a.m.

Charles Lipscomb witnessed the wreck and said he and other drivers tried to help people inside the RV.

"It just ignited and it was too hot," Lipscomb said. "We couldn't do nothing. The guy was pinned on the ground. The heat was too intense."

Officials believe the crash may have been caused by distracted drivers.

Earlier Wednesday afternoon, a separate crashed near the U.S. Highway 301 interchange shut down southbound lanes of I-95. A tractor-trailer ran off the right shoulder and into the woods. Authorities worked for hours to cut the driver out of the vehicle.

"That vehicle, for some reason, ran off to the right shoulder, overturned. That pinned the driver in," Gordon said.

A third crash, involving five vehicles, happened on I-95 at mile marker 88 after the fiery wreck. Authorities said a RV was stopped due to another crash when a tractor-trailer hit the RV and caused it to spin. Two people in the RV were killed.

Northbound traffic on I-95 is being directed to take exit 87 and southbound traffic to take exit 97. Motorists should follow detours set by law enforcement. To avoid the area altogether, motorists can follow an alternate route via U.S. 264 and I-40 through Raleigh.