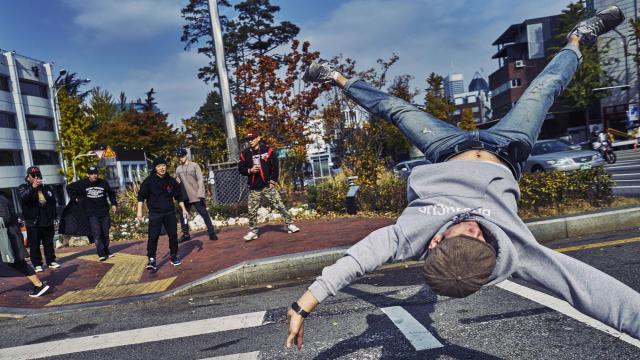 South Korea is known for many things: kimchi, K-pop bands, inventive electronics, Korean dramas and cultlike beauty products. Break-dancing doesn’t exactly come to mind, even though South Koreans have been a dominant force on the international B-boy scene for 15 years.

Originally founded in the 1970s, primarily by black and Puerto Rican youth in the Bronx, break-dancing (a term coined by the media and detested by some) was a catchall to incorporate an array of dances — toprock, downrock, power moves and freezes — performed during the break beats of hip-hop and funk songs.

B-boys and B-girls were influenced by everything from Brazilian capoeira and gymnastics to James Brown and martial arts, and their imaginative moves continue to leave observers in awe.

Like millions of others, I saw breaking for the first time in the 1983 film “Flashdance.” In a daytime street scene, Jennifer Beals’ character, Alex, and her best friend stumble upon members of the iconic Rock Steady Crew as they pop, lock, spin and freeze to the Jimmy Castor Bunch’s “It’s Just Begun.”

This 74-second vignette would set off a global break-dancing craze that led to suburban kids like me toting around pieces of cardboard to practice spinning on. Films such as “Breakin’,” “Beat Street” and “Breakin’ 2: Electric Boogaloo” would further mainstream B-boying in the heartland and beyond.

U.S. soldiers in expat-friendly Itaewon and other cities near military bases introduced the dance form to South Koreans in the 1980s, but it was a visiting Korean-American hip-hop promoter named John Jay Chon who is credited with spawning the B-boy explosion in Seoul.

In the late ‘90s, Chon met a local group of urban dancers at a club and gave them a VHS tape of a Los Angeles break-dancing competition. He’d later find out that the tape was duplicated hundreds of times. The rise of hip-hop as a global phenomenon, as well as the internet and YouTube, stoked Koreans’ interest even more.

“Any country that’s been colonized can relate to the ideas of hip-hop,” said photographer An Rong Xu, who lives in New York and spent five days in Seoul with the city’s elite break-dancers in November. “Hip-hop was created so you could feel like you belonged, and that is what these B-boys found. It’s sort of like a religion for them.”

Xu recognizes that Seoul’s B-boys have borrowed much more than music from American hip-hop, including the do-rags they wear along with their gestures and posturing. Some may think of it as cultural appropriation, but he sees it as homage, or adaptation, noting that Korean B-boys have “taken what started in the Bronx and have adopted the style and culture and made something for themselves, that’s unique to them.”

Kim Cha Dol, aka Slam, said his personal style is influenced by the Eminem film “8 Mile.” He connected with the blue-collar struggles portrayed in the film and the idea that, through an art form, you can pay tribute to and rise above your roots in the same breath. Xu said that “8 Mile” represents the idea that hip-hop isn’t about color.

“If anything, B-boys are actually the most diverse part of hip-hop culture,” Xu said. “When there is a break-dancing competition, they invite the world.”

B-boying is also an escape from the strict conservative culture and intense educational system that many Koreans find stifling and stressful. Break-dancing and hip-hop — both of which are loud and emotional — allow for a type of individual expression that’s uncommon in Korean society

Xu said that for South Korean b-boys, fashion and function work hand in hand. Beanies make it easier to spin on one’s head. Nineties-style oversize sweatsuits allow for freer movement. Sneakers with thick soles are favored for their durability.

Korean B-girls have a presence too, but in much smaller numbers because of rigid social strictures that ask them to work and raise families, all while adhering to unrealistic standards of beauty. (Sound familiar?) “They fall in love with it, but they can’t make a career out of just dancing,” Xu said.

On the other hand, some Korean B-boys are making a living by dancing full time or teaching the dance form in studios. Their professional recognition owes something to the dance battles they take part in around the world. In 2002, South Korea’s Expression Crew won Battle of the Year, an international B-boy competition held annually in Germany. Korean crews such as Gamblerz, Last for One, Extreme Crew, Jinjo Crew and Fusion MC would all go on to take first place over the next decade.

B-boy culture became so popular that a live break-dancing musical, “Ballerina Who Loved a B-Boy,” opened in Seoul in 2005 and ran for nearly eight years. The show also toured abroad, including performances at the Edinburgh Fringe Festival and the 37 Arts Theatre (now Baryshnikov Arts Center) in New York City.

Then Benson Lee's 2007 documentary, “Planet B-Boy,” which follows five crews from France, Japan, the United States and South Korea as they competed for the 2005 Battle of the Year, helped solidify the phenomenon.

The South Korean government embraced B-boying in 2007 by sponsoring R16, an annual B-boy tournament and urban arts cultural festival. In 2016, R16 changed its name to Respect Culture and moved to Taipei, Taiwan, after the government withdrew funding.

Gamblerz, one of Korea’s most famous crews — they won the 2004 and 2009 Battle of the Year — are still active. “They dance six to eight hours a day — B-boying is their life,” said Xu, who photographed the Gamblerz-hosted Cypher Shock Battle at Hoseo Art School.

It’s that intense training and dedication, along with impressive power moves, a common background in taekwondo and the country’s unbridled passion for winning, that has made South Koreans so prolific.

And since men ages 18 to 35 are subject to South Korea’s mandatory two-year military service requirement, B-boying is often a last chance to express their individuality before being largely cut off from society and forced into a stiff uniform.

One B-boy, Yu Beom Sang (aka Tyranny), put it best. When Xu asked about his dance uniform, he replied: “I call it freedom.”