Seniors in San Juan, Lacking Power and in Peril 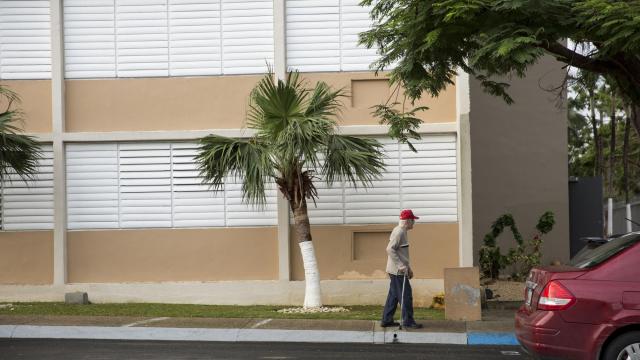 SAN JUAN, Puerto Rico — Altagracia Rodriguez de Jesus woke up on a recent morning and cranked open the aluminum shutters along one wall of her small, eighth-floor apartment overlooking the capital.

She took a cold shower and kept the bathroom door open to let in the sunlight. Her cockatiel, Precious, sat in a cage on the toilet. Rodriguez de Jesus, 80, sang to the bird.

She and other residents at the subsidized apartment tower where she lives could not switch on lights, cook on electric stoves, turn on bedroom air-conditioners or use washing machines.

Hurricane Irma cut power to the San Juan neighborhood of Hill Brothers on Sept. 6. Two weeks later, Hurricane Maria devastated the entire island’s electrical grid. It was not until early December that part of the neighborhood had power again.

With large areas of Puerto Rico still in the dark three months after the first of the storms — according to government reports, only 60.4 percent of the pre-storm power grid load has been restored — older residents and those with chronic medical conditions are suffering in even more ways than their neighbors. Many nursing homes have no power. The failure to re-establish functioning telephone networks and transportation systems in many areas makes it difficult to get regular medical care. Fire safety systems are inoperable, posing special dangers for those who cannot easily escape.

A look inside the 356 units that make up Puerto Rico’s largest housing project for low-income seniors, Comunidad del Retiro, or Retirement Community, helps explain the hurricanes’ continuing impact on the vulnerable.

A new analysis of government data obtained by The New York Times shows that people with certain chronic conditions — including diabetes, which Rodriguez de Jesus has, lung disorders and dementia — died at significantly higher rates in the weeks after Hurricane Maria. Their lives are still precarious.

Inside the complex, there is a man with apnea who cannot sleep at night without power to his oxygen machine. A woman with dementia who was scheduled for transfer to a nursing home before the storm. And Rodriguez de Jesus, who mistakenly drank a poison in the dark and came close to becoming another uncounted hurricane death.

There have been falls in dimly lit apartments. Special diets that could no longer be followed. Medical interventions, drugs and treatments missed or delayed.

Like thousands of others across the battered island, Enid Olivera, the administrator, had a repair ticket from the Puerto Rico Electric Power Authority. For more than two months, she received no word about when service might be restored or why some nearby buildings already had it. “I text people, I call people,” she said in late November. “We are all a priority, but the elderly more than anyone.”

A few of the residents’ families took them in. But most — she estimates 95 percent — have nowhere else to go. “We are their family,” Olivera said. “They have been very patient.”

Two large green generators were used to pump water to the apartments and to light the common areas on the ground floor. When the generators were on, one of the two elevators in each of the two towers in the complex could run. But Olivera decided in late October to switch the generators off every night from 11 p.m. to 6 a.m., essentially trapping those on high floors in their darkened apartments.

There was a need to save on diesel costs, but then the Federal Emergency Management Agency began supplying fuel. Olivera said technicians had advised her that the generators needed to rest.

In Rodriguez de Jesus’ apartment that morning, a vial of insulin for her diabetes sat beside the sink next to a wilting head of cabbage.

Knowing that the medication was supposed to be kept cool, but fearful it would be stolen if she left it in a shared refrigerator downstairs, she kept the insulin, top down, in a cup of water, which she imagined might help preserve it. (BEGIN OPTIONAL TRIM.) Without a working stovetop, she spooned instant coffee into a cup, and then dissolved the grounds in evaporated milk from an open can of Carnation. She added purified water from a gallon jug and finished it off with a packet of Splenda.

Rodriguez de Jesus said she was trying to remain upbeat. She stood by a window for light, applied bright lipstick and combed her hair into two girlish pigtails.

Her apartment was beginning to get warm, another danger for the elderly. She turned down the shutters, walked out the door and locked the metal gate behind her.

On that day, the elevator — which frequently shut down when power fluctuations set off an earthquake detector — was working. “I’m not 20 anymore,” Rodriguez de Jesus said, which would have made it easier to take the stairs. She stopped to kiss residents in wheelchairs as she made her way to the center of the complex.

In an otherwise empty handicraft room, Orlando Quinones, 70, was lying on a cot facing the wall, breathing with the help of a machine that supplies oxygen. He has emphysema and had flipped his biological clock so that he could sleep during the day when the generators were turned on and he could plug his oxygen concentrator into an outlet.

(END OPTIONAL TRIM.) Rodriguez de Jesus waited in a hallway for Dr. David R. Perez Pantoja, a general practitioner who visits three times a week and whose own home had a generator but no electricity.

He was providing follow-ups to patients, including Rodriguez de Jesus, whose specialists — a cardiologist and a hematologist — have not been able to see her. Perez Pantoja told her not to worry about a heart test she has not been able to get. “Everything will go back to normal,” he reassured her.

Rodriguez de Jesus said she was having trouble refilling one of her prescriptions, a common complaint after the storms. She was out of medicine to treat her thyroid deficiency, one of a panoply of medical problems that include a failed kidney, high cholesterol, peripheral nerve problems and frequent falls. Perez Pantoja called the pharmacy and straightened out the prescription issue. He examined her and asked how she was.

“I’m in bad shape, but there are people in worse shape,” she told him.

Before getting into bed the night of her birthday, she told him, she had put four or five pills in her mouth and taken a swig from a water bottle. She felt intense heat in her throat.

“I remembered it was Clorox,” she said. With the lack of power, the washing machines were not operating, and her daughter-in-law had given her bleach in a water bottle so she could hand-wash a shirt in her sink. In the dark, Rodriguez de Jesus had confused the bleach with water, a potentially deadly mistake.

She said she had drunk a glass of Carnation milk and vomited. She felt her tongue peeling. She told herself that if she died, that was that.

“But nothing happened,” she told the doctor. He said she had avoided a calamity by reacting quickly. “I tell you, I am like an oak,” she said. (BEGIN OPTIONAL TRIM.) Perez Pantoja has made house calls upstairs, especially when the generators were down. He has seen a lot of depression and anxiety.

Night comes with a chorus of frog song. On a recent evening, the woman with dementia wandered the halls and cried. Olivera, the administrator, hugged her. In the recreation room, a man with lung cancer and diabetes, Aurelio Hernandez Perez, 76, gave himself a breathing treatment, knowing the generators would soon be switched off.

Another man walked by, his arm in a cast. He said he had fallen in the dark and then waited days in pain before getting an X-ray. A man in a yellow shirt returned from visiting his wife in the hospital, where she was being treated for pneumonia, another disease that has claimed more lives after the storm this year than in the same months in previous years.

Jose Santiago Tanco, 63, a diabetic, slid into a cot in the hallway as he did each night, fearful of sleeping alone upstairs. “How am I going to ask for help?” he said.

(END OPTIONAL TRIM.) Rodriguez de Jesus often spends evenings visiting her son and daughter-in-law, who live across the courtyard. Her home telephone stopped working after the power failed, and she did not have a cellphone.

So when she left them at night, she knew they would stare out their windows until she arrived home and waved a small lantern like a pendulum from her dark apartment to let them know. Then she closed the shutters and went to sleep.

When power returned to part of the Hill Brothers area last week, the company that administers Comunidad del Retiro finally had the chance to get service restored to the complex. It had to pay a private electrician to do the work. During the dark months, two of the complex’s most fragile residents had died; it was not clear, Olivera said, what role the loss of power might have played in hastening their deaths.