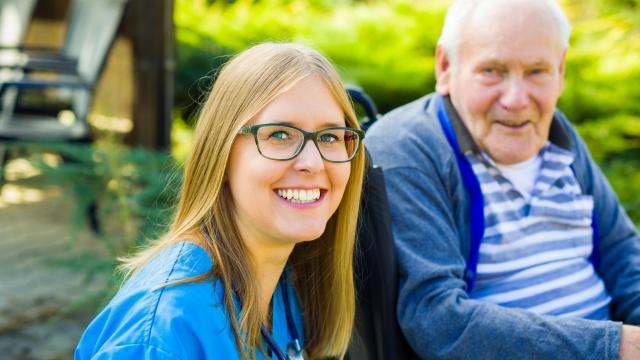 This article was written for our sponsor, Action Health Staffing.

Michael Cooke, a veteran living in Rocky Mount, suffered his first stroke 10 years ago. Since then, he's suffered several more, including one in 2018 that left him in need of extra care.

Cooke's wife Debra decided to reach out to the local VA for help.

"I contacted the VA, who put us in touch with Action Health Staffing," said Debra. "My husband has had a series of strokes — doctors can't figure out why he's been having them. He was needing help with feeding himself, taking a shower and dressing himself. We get 15 hours of service a week."

Action Health Staffing, a privately owned and operated home care services and staffing agency that serves clients in Eastern North Carolina, provides an array of services such as 24-hour care, short and long term care, respite care, and more. The care services were just what the Cookes needed.

Tiffany Wheeler, a home health care aide with Action Health Staffing, has been working with the Cookes for almost a year and has been an aide for almost three decades. Her daily goal is to take a bad situation and try to turn it into a good one.

Inspired by her own mother, who was a minister, Wheeler spent the early part of her life volunteering and helping people who her mother ministered to. She said she knew from a young age "helping people is what she wanted to do."

"When we first started we had another great aide, but Michael ended up catching pneumonia and had to go to the hospital and then rehab for the better part of a month. During that time, our previous aide was reassigned," said Debra. "We went through several aides after that before finding the right fit in Tiffany."

Debra explained her husband is "a true vet" and "can be difficult." This type of disposition in stroke patients is understandable given the physical struggles and the emotional toll something as serious as a stroke can cause.

Once the president of a car dealership with lots of responsibilities, Michael now needs assistance standing and walking and relies on his wheelchair most of the time. Debra said this newfound lack of independence has been hard on him.

"Tiffany came in and did a respite day for me, and something clicked between her and us, something clicked between her and my husband," said Debra. "The next thing I knew, she had asked to come and work with us. We had been in between aides and we hadn't found the right person yet. The next thing I knew she was coming here every week and she's been here ever since."

Wheeler said as an aide, you have to understand a client is upset due to their condition, not anything you've done. Wheeler's tactic is to find out what's bothering a client and figure out how she, to the best of her ability, can make it better. Another strategy? Discovering what a client likes and getting them engaged in passions or hobbies.

Wheeler even eventually got a golf club into Cooke's hands as they worked on standing up and walking to the kitchen.

"Tiffany is just so flexible. She truly does go with the flow," said Debra. "Additionally, she respects that Michael has good days and bad days and she always comes in and tries to cheer him up. They're like old friends — fussing over each other and joking with each other and stuff. She's just really good with him."

Debra said Wheeler is strong and doesn't take no for an answer, but does so in a respectful way while doing anything she can to make Michael comfortable.

The care and companionship that Wheeler provides to Michael is not only beneficial for him, but also Debra. Wheeler emphasized the importance of respite for loved ones who are full-time caregivers and always encourages Debra to go out and take some time for herself when she's getting her hours in with Michael.

"Tiffany is really good about looking at me and saying, 'Just go for a ride. Get out of this house.' She really does take care of both of us. She's just awesome," said Debra.

"I encourage Mrs. Debra, as well as I do with my other clients, if you are able to get respite — because you need that time away from home — take it," added Wheeler. "You need time to do things like grocery shopping and other errands. It's good when you have a person in your home that you can trust to support you."

Debra said she plans to keep Michael home as long as she can and knows Wheeler will be by their side every step of the way. Aides like Wheeler and agencies like Action Health Staffing make this possible for dozens of families every day.

"If I can keep him home, that's where he's going to be," said Debra. "Action Health has sent us some really good people. It's hard being a caregiver. Whenever you can get that break, take it. There's no shame in asking for help."

Added Wheeler, "This job is just rewarding. I look at it as, this could be me one day. I want to be of service so that when I get to this point someone will treat me the way I treated another person."

This article was written for our sponsor, Action Health Staffing.