Raleigh, N.C. — A proposal to appoint judges in North Carolina, with voters deciding later on full terms, emerged at the statehouse Wednesday, but a lack of consensus left unclear whether the General Assembly can approve any judicial branch changes during a special session slated to begin next week.

Senate committee members reviewing these issues called instead for a new joint House-Senate committee to hash things out. For months, this Senate committee has reviewed a House plan to keep judicial elections but redraw the districts judges are elected from, but the committee's task always included the possibility of deeper reforms, and indications have been Senate leadership preferred some sort of appointments system.

After Wednesday's committee vote, Senate Rules Chairman Bill Rabon shook his head when asked whether legislative leaders would approve any judiciary changes when they go into session Jan. 10, which was once the plan.

But state Rep. Justin Burr, R-Stanly, who kicked this debate into the state's headlines last summer by unveiling proposed new maps in the waning days of the regular legislative session, said he remains optimistic after sitting in on the Senate committee meeting. There was some suggestion that a joint committee could function almost like a conference committee – teams of House and Senate leaders who cut deals on legislation after the two bodies pass competing proposals.

"I think it's going to take a few weeks," Burr said. "There's still time to get this done."

The Senate committee actually rolled out four potential appointment plans Wednesday, but members keyed in on one. Dubbed "The Purple Plan," the proposal starts with an open nominations system – essentially people putting their names into a hat for judgeships. 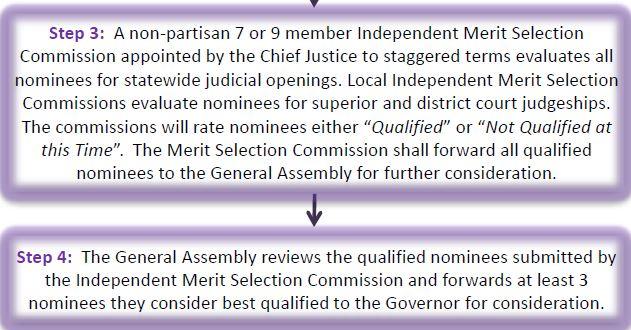 Then, a commission appointed by the chief justice of the state Supreme Court would evaluate nominees for the Court of Appeals and Supreme Court, and local commissions would review potential Superior Court and District Court judges. Anyone rated "qualified" by these groups would be forwarded to the General Assembly, which would whittle the list down to at least three nominees per vacancy.

The plan, sketched out Wednesday in a flow chart, does not indicate how the General Assembly would make this decision, but committee Co-chairman Warren Daniel, R-Burke, said it would take majority votes in both the House and the Senate. Several senators said details of the plan are open for debate, with Rabon saying it's "not the recipe, it's just a guideline."

The nominees would go to the governor, who would choose an appointee from the list. That appointee would serve until the second general election after his or her appointment, when voters would be asked to confirm or reject a full 10-year term. Judges could serve only one term on that court, though they could put their names in to move to another court, going from Superior Court to the Court of Appeals, for example.

Gov. Roy Cooper supported a modified appointments system as a state senator, but he suggested to the Associated Press recently that he would oppose any judicial changes proposed by Republicans as long as they remain a veto-proof majority in both chambers of the legislature. The GOP majority has made a number of moves on the judiciary recently, including voting to return to partisan judicial elections and then canceling the 2018 judicial primaries.

"What we have right now is a super-majority that does whatever it wants, and that's not a good atmosphere to make changes in the judiciary, particularly when what they have done has been to inject more politics in the judiciary," Cooper said last month.

State voters would have to approve an appointments system in a statewide referendum for it to take effect because doing away with elections for Supreme Court, Court of Appeals and Superior Court judges requires a constitutional amendment. The General Assembly could change the method for naming District Court judges without such an amendment.

It takes a three-fifths vote in the legislature to call for a constitutional referendum, and Republicans have the numbers to hit that mark without Democratic support, but Rabon predicted major changes will take at least some bipartisan support.