Senators Question Kavanaugh About His Record and Legal Positions 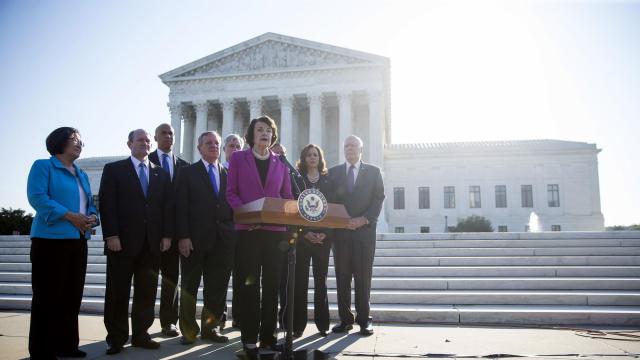 Judge Brett M. Kavanaugh is before the Senate Judiciary Committee for the second day of his Supreme Court confirmation hearing, defending his judicial independence.

Sens. Charles E. Grassley of Iowa and Dianne Feinstein of California, as the top members of the committee, get the first questions, followed by the rest of the panel. Each senator has 30 minutes to interrogate Kavanaugh.

Answering the first question Wednesday, from Grassley, the Judiciary Committee chairman, Kavanaugh said he would be an independent justice. He cited three Supreme Court landmarks to make his case.

The third was notable: United States v. Nixon, the 1974 decision in which Supreme Court unanimously ruled that President Richard Nixon had to comply with a subpoena seeking tapes of his conversations in the Oval Office.

Kavanaugh has not always been unequivocal in his support for the decision. In a 1999 transcript of a round-table discussion, he said, “Maybe Nixon was wrongly decided — heresy though it is to say so.” His allies have said he meant the statement as a critique of the legal strategy of President Bill Clinton’s lawyers.

On Wednesday, Kavanaugh’s said the message of the decision, which he called one of the greatest moments in U.S. judicial history, was clear. “No one is above the law in our constitutional system,” he said.

The second day of Kavanaugh’s hearings started with still more protests — just as Grassley opened with a hope that the proceedings would be under more control than Tuesday’s divisive opening. One woman was led out shouting, “Sham president, sham justice.”

In his opening remarks, Grassley accused Democrats — who plotted strategy for the hearing on a conference call Monday — of colluding with protesters to disrupt the hearing.

“NBC News reported that Democratic members of the committee plotted with minority leaders to disrupt the hearing yesterday,” he said. “Democratic senators interrupted the hearing 63 times before lunch, and in the audience, 70 people were arrested yesterday who were following their lead.”

But one of the protesters took exception to Grassley’s assertion, since, she said, she was calling out Democratic leaders such as Sen. Richard J. Durbin of Illinois for their tepid efforts to thwart the nominee.

Kavanaugh, accused by Democrats of being a tool for big corporations and a foe of the little guy, wasted little time in trying to humanize himself Wednesday. In response to Grassley’s first question, about what makes a good judge, he invoked his mother, herself a judge.

“My mom taught me in the first instance, judging is not just about theory,” he said. “It’s not theory. It’s not just what a law review article says. Judging is real people in the real world, and every decision we make, no matter how high-minded it might sound, affects real people with real world interests.”

He told the panel — amid raucous protests inside the room — that civility is important.

“I’ve tried to be a very collegial judge. I’ve tried to be civil,” he said, adding that he wants “the losing party in every case to come out and say, ‘Kavanaugh gave me a fair shake.'”

Democrats have indicated that they intend to pressure Kavanaugh into explaining his stance on a number of issues, including whether he would uphold Roe v. Wade, the 1973 landmark case that legalized abortion.

Feinstein, one of the most vehement supporters of gun restrictions, is also likely to press him on what she described as “out of the mainstream” views on gun rights.

Grassley has already urged the judge to invoke the so-called Ginsburg Rule and follow the example of Justice Ruth Bader Ginsburg, who as a nominee refused to answer questions that would hint or foreshadow future decisions.

In his opening remarks, Kavanaugh vowed to uphold the attributes of an ideal judge and remain “a neutral and impartial arbiter who favors no litigant or policy.”

Will any Republicans ask tough questions?

Despite the senator’s criticism Tuesday, Republicans are unlikely to offer any tough opposition. Instead, Democrats on the committee — many of whom are toying with possible presidential runs in 2020 — are poised to supply the most aggressive lines of questioning.

Comfortable in their ability to confirm Kavanaugh with a simple majority vote, Republicans hailed him as an outstanding jurist to fill the seat left vacant by Justice Anthony M. Kennedy.

‘The noise of democracy’ or ‘mob rule’?

Tuesday’s hearing was unusually chaotic for what is generally a sedate legislative process: Dozens of protesters were hauled from the room and arrested, while Democratic lawmakers engaged in their own theatrics and frequently interrupted with demands and objections.

Sen. John Cornyn of Texas, the No. 2 Republican, accused Democrats of participating in “mob rule,” as Durbin proclaimed that the demonstrations were “the noise of democracy.”

But with Wednesday offering the first opportunity for lawmakers to question Kavanaugh, it is unclear what disruptions, if any, will emerge. Several senators with presidential aspirations, including Cory Booker of New Jersey, Kamala D. Harris of California and Amy Klobuchar of Minnesota, are likely to continue to use the proceedings to emphasize their opposition to the current administration and build material for future campaigns.

Grassley, who held the hearing despite a call from Democrats to delay it, has already promised to maintain a tighter grip on the proceedings.

The shadow of Trump’s legal troubles

Democrats are expected to grill Kavanaugh on his opinion of the scope of executive power, particularly whether a sitting president should be protected from investigations while in office.

Several lawmakers argued in their opening statements that the judge would be sympathetic to Trump, should such a situation arise, and that he was considered a potential ally for the president. It is likely that they will press the judge on his shifting views on the subject.

“I don’t decide cases based on personal or policy preferences,” Kavanaugh said in his opening remarks, adding, “I am a pro-law judge.”

And while Republicans objected to the depiction of Kavanaugh as a partisan judge, his résumé points to a history of conservative political advocacy, including a stint in President George W. Bush’s administration.