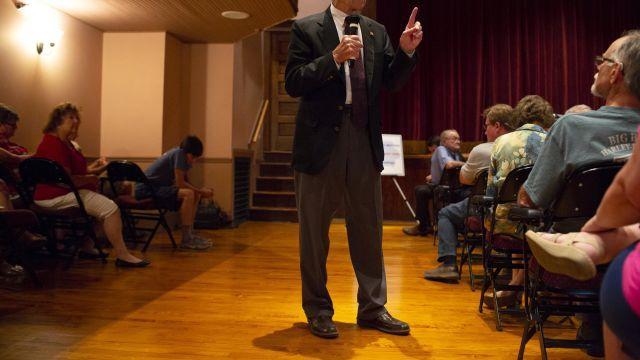 WASHINGTON — Sen. Charles E. Grassley, R-Iowa, said Thursday that President Donald Trump had committed to supporting a rewrite of the nation’s federal sentencing laws after November’s elections, breathing life into a long-stalled priority that has united an unlikely coalition of conservatives, libertarians and liberals.

“He is very satisfied to have this thing come up after the election,” Grassley, chairman of the Senate Judiciary Committee, said minutes after ending a phone call with Trump and his son-in-law and senior adviser, Jared Kushner, who has helped push for the changes.

Grassley said he and Kushner had earlier had a “very positive meeting” with Sen. Mitch McConnell, R-Ky., the majority leader, who signaled he was willing to allow a vote on the legislation during the Senate’s lame-duck session this fall if the bill could draw sufficient support from Republicans.

The legislation itself has yet to be finalized but would be more modest than a wide-ranging sentencing and prison overhaul that was introduced with great fanfare in 2015. The compromise language would preserve a suite of key sentencing changes, including reducing some mandatory minimum sentences for nonviolent drug offenders, retroactively extending a reduction in the sentencing disparity between crack and powder cocaine and a provision that allows judges greater discretion in sentencing.

The other half of the bill includes measures meant to reduce prison recidivism, like job training, education and mental health and drug treatment, and incentivizes prisoners to take part. It already passed the House overwhelmingly this year as a stand-alone bill.

Grassley and Kushner, as well as other Trump administration officials, have been negotiating the proposal for weeks after earlier efforts faltered. In narrowing the bill, they have risked losing the support of liberals, but crucially, in recent days, they won the endorsement of Sen. Richard Durbin, D-Ill., who was Grassley’s original co-author in the overhaul effort.

In the end, the bill’s fate may turn on what exactly McConnell means by sufficient support. Though Grassley’s earlier measure had the backing of a majority of senators, McConnell has thus far refused to allow the chamber a full vote because its sentencing provisions divides Republicans, some of whom see it as a weakening of the party’s old tough-on-crime mantra. There is also no guarantee the Republican-controlled House would be willing to take up the Senate’s new measure in the final weeks of its session.

A senior administration official with direct knowledge of both the president’s plans and McConnell’s thinking said Kushner and his Senate allies left the meeting with the Senate leader with an agreement to have Sen. John Cornyn of Texas, the No. 2 Republican, whip votes after the midterm election. But McConnell stopped short of promising to bring a vote to the Senate floor, that official said.

A spokeswoman for McConnell, Antonia Ferrier, said that “while no commitments were made by the leader on holding a vote, proponents of the legislation will continue to discuss the issue with their colleagues.”

Trump, for his part, ultimately declined to pursue pushing a criminal justice overhaul before the midterms because he was aware of the political opposition that still exists in Congress and saw an unrealistic timeline to get the work accomplished.

“The president remains committed to meaningful prison reform and will continue working with the Senate on their proposed additions to the bill,” Hogan Gidley, a White House spokesman, said in a statement. “The administration remains focused on reducing crime, keeping communities safe and saving taxpayer dollars.”

Senators introduced criminal justice legislation in 2015. But even with the support of outside groups as ideologically diverse as the American Civil Liberties Union and Charles G. and David H. Koch, the billionaire conservative donors, the push ultimately faltered in the run-up to the 2016 election.

An attempt at revival appeared destined for a similar fate this Congress. Attorney General Jeff Sessions, who helped derail Grassley and Durbin when he was a senator, has used his perch atop the Justice Department to lobby aggressively against Kushner and reform advocates within the administration — enraging Grassley.

On Wednesday, Cornyn put a damper on some of the renewed optimism of the backers of the legislation who had hoped for quick action.

“I think the sentencing reforms are still controversial and divide Republicans, and I just don’t see the wisdom of dividing Republicans in a contentious matter like that before the midterm elections,” he said.

Grassley has been a powerful advocate for the legislation, relentlessly lobbying colleagues even after the bill appeared to be dead. On Thursday, he showered praise on Kushner.

“This is obviously where we are because of the president’s son-in-law being involved in this issue,” he said.

Grassley said he had been told that in Thursday’s meeting at the White House, Sessions had softened many of his objections.

But in a statement from his spokeswoman, Sarah Isgur Flores, Sessions showed little sign of backing down: “We’re pleased the president agreed that we shouldn’t support criminal justice reform that would reduce sentences, put drug traffickers back on our streets and undermine our law enforcement officers who are working night and day to reduce violent crime and drug trafficking in the middle of an opioid crisis.”