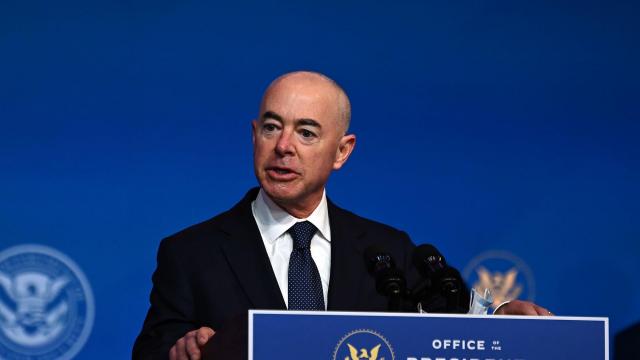 CNN — The Senate voted Thursday to break a GOP filibuster and advance the nomination of Alejandro Mayorkas to be President Joe Biden's secretary of Homeland Security after Republicans objected to efforts to quickly install a critical leader of the country's national security apparatus.

Now that the nomination has successfully cleared that procedural hurdle, a final vote on confirmation is on track for Monday evening.

Senate Majority Leader Chuck Schumer has pushed to have Mayorkas confirmed swiftly, but Republicans have argued that the nominee hasn't been properly vetted on immigration issues and have called for an additional hearing on his nomination.

Mayorkas is the first Biden nominee who has met a Republican filibuster, which comes as the Department of Homeland Security grapples with the coronavirus pandemic, national security concerns and immigration.

DHS on Wednesday issued a threat bulletin due to the ongoing potential for violence in the wake of the presidential inauguration, including concerns that domestic extremists may be emboldened by the US Capitol attack earlier this month.

The department has been without a Senate-confirmed leader since Homeland Security Secretary Kirstjen Nielsen was ousted in spring 2019.

The use of the filibuster -- to stall nominations or legislation -- has long been a favored tool of the minority party, something Democrats did often when trying to derail and delay the Republican agenda under then-President Donald Trump. While several of Biden's nominees have been confirmed and have moved at a slower pace than some of his predecessors' Cabinet picks, Republicans had not yet threatened to filibuster a nominee until Wednesday. Mayorkas is now the first.

The Senate Homeland Security Committee voted Tuesday to advance Mayorkas' nomination to the floor and held a hearing into the nominee's qualifications to lead the department.

But some Republicans want a hearing for Mayorkas before the Senate Judiciary Committee, in addition to his hearing before the Homeland Security Committee.

"The Committee on the Judiciary has jurisdiction over matters relating to immigration and nationality ... For this reason, all members of the committee should have the opportunity to hear from Mr. Mayorkas directly, and to publicly discuss with him his plans with respect to the Department's immigration components and functions," a letter from the senators said making their request.

Cornyn told reporters Wednesday that "there's a number of problems" with the Mayorkas nomination.

Democratic Sen. Dick Durbin of Illinois, who is set to chair the Judiciary Committee, told CNN, "I don't see why that's necessary" and called the request for a hearing "totally political."

"This is indefensible. We are withholding the leadership of the Department of Homeland Security," Durbin added.