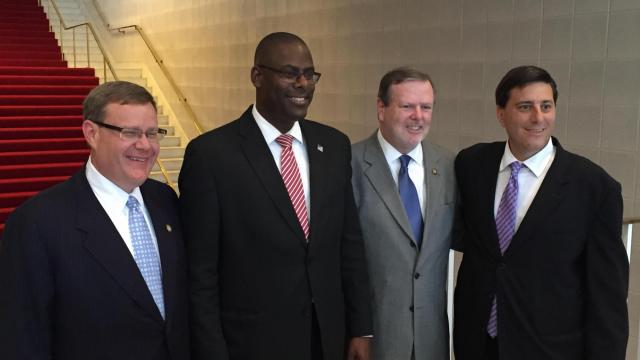 Raleigh, N.C. — North Carolina Senate Republicans have set up their own "affiliated party committee" separate form the state GOP's long-established state fundraising apparatus, according to records maintained by the North Carolina State Board of Elections.

Under a law passed in 2015, the North Carolina Republican Senatorial Committee will be able to function as its own political party with its own rules and structure.

This type of "affiliated party committee" was at the heart of a dispute between legislative leaders and party activists last year. The structure was created as part of a broader election bill, but it provoked a strong response from activists and some rank-and-file lawmakers who worried that it would concentrate too much power in the hands of legislative leaders.

The new law allows the group of Republicans or Democrats elected in either the House or the Senate, typically referred to as the majority and minority caucuses, to set up their own party organs. Proponents say that such committees will enhance transparency by creating separate funds through which money will be piped if it is dedicated for legislative campaigns. But observers pointed out that it would also let legislative leaders pursue their own political agenda with less input from party activists.

After a public dust-up, Republican lawmakers and party leaders held a public handshake session to bury the hatchet and pledge to continue to work together.

"We're going to continue working at and working with the state party," said Ray Martin, the Senate Republican Caucus' director.

Martin said the new committee would be a vehicle to help fellow GOP senators and candidates should one be needed.

"I don't think any decision has been made on how or if to utilize it," he said.

One key change made in the legislation to appease critics allows the the caucus as a whole to choose someone to manage the funds rather than simply putting it in the hands of the party's top leader in a particular chamber.

The new Senate Republican committee was seeded with $10,000 from Senate President Pro Tem Phil Berger's account. It will be able to raise money from Senate members to target toward key races. In theory, such committees could get involved in primaries, contrary to party rules that require official GOP organs to stay neutral.

"We have no concerns over the new Senate Committee as the Party and Senate caucus are working closer together now than ever before," said North Carolina Republican Party Chairman Hasan Harnett. "This year, the Party worked in tandem with the Senate to assist the caucus recruit several candidates, increasing the total number of Republican contested races from 41 in 2014 to 44 in 2016. Further, Senator Berger is engaged with the overall Party structure, helping ensure the Party has the necessary funds to move towards victory. We will continue to work together everyday and see that we elect our Republican candidates come November."