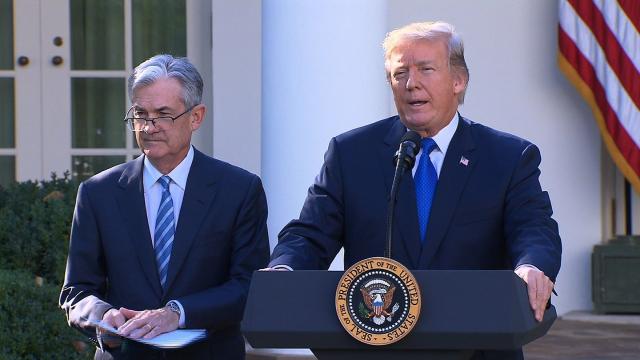 WASHINGTON (CNNMoney) — The Senate Banking Committee on Tuesday voted to advance the nomination of Jerome Powell as the next chairman of the Federal Reserve.

The Senate panel voted 22 to 1 in favor of President Trump's nominee. Democratic Sen. Elizabeth Warren was the only member to oppose the nomination. Powell's nomination will now go to the Senate for a full vote. It's unclear when that vote would be scheduled.

A Fed governor since 2012 and a former Treasury official under the George W. Bush administration, Powell is seen as a non-controversial pick for the role and is widely expected to secure the job.

"We expect an uncomplicated committee vote, despite some Democratic opposition," Ian Katz, an analyst at policy research firm Capital Alpha Partners wrote in a note to clients. "Full Senate approval by early February, when Janet Yellen's term ends, appears likely at this point."

During Powell's first confirmation hearing before the Senate last week, there was strong support for the president's choice.

"Governor Powell has proved he is qualified to lead the Fed," Sen. Mike Crapo, a Republican from Idaho and chairman of the committee, said at the hearing.

Democrats voted nearly unanimously to confirm Powell when President Obama nominated him to the Fed board in 2012 and then again in 2014. Now, some are raising questions about whether he would be too aggressive in dialing back post-crisis reforms.

Warren told the Senate panel on Tuesday that she would not support Powell's nomination over concerns about the rollback of the Dodd-Frank rules.

"Our financial rules need to be stronger not weaker," she said, expressing her doubts that Powell wouldn't direct the Fed to preserve critical rules.

Conversely, Republicans have offered few, if any, criticisms of Powell this time around.

His nomination under Obama drew opposition from Republicans like former Sen. David Vitter, who tried to delay Powell's confirmation process, arguing he would be a 'rubber stamp' for Fed chairman Ben Bernanke's policies.

Sen. Dean Heller, a Republican from Nevada, told Powell at last week's hearing he was trying to get to yes, after voting against him twice during the Obama years.

Powell, 64, has affirmed his leadership at the Fed would represent continuity with his predecessors: Yellen and Bernanke. He has also lauded the central bank's patient approach in gradually moving interest rates higher and slowly unwinding its $4.5 trillion balance sheet.

Powell has played a key role in helping to shape the Fed's policies over the last five years, and has been a consistent ally of Yellen.

The Fed governor has also left the door open to consider "appropriate ways" to ease rules on banks, while still preserving core pieces of the 2010 Dodd-Frank regulatory law, including annual stress tests and strong capital requirements.

At the confirmation hearing last week, Powell endorsed a GOP plan by senators to provide regulatory relief to financial institutions, while agreeing it would still give latitude to the Fed to supervise and regulate banks as needed.

In April, the Fed tapped Powell to serve as the new point man overseeing how Wall Street banks are regulated after Daniel Tarullo, the central bank's regulatory czar, stepped down. Tarullo held the position for the past eight years.

Powell spent much of his career in investment banking and private equity before joining the Fed.

A Princeton graduate, he was a lawyer in New York before he joined the investment bank Dillon, Read & Co. in 1984. He stayed there until he joined the Treasury Department in 1990. After he left Treasury, he became a partner in 1997 at The Carlyle Group, the private equity and asset management giant. He left Carlyle in 2005.

Should he be confirmed, Powell would not only be the first former investment banker to head the Fed, but he'd also be the first individual who is not an economist to take the helm in more than 40 years.

--CNNMoney's Patrick Gillespie and Chris Isidore contributed to this report.