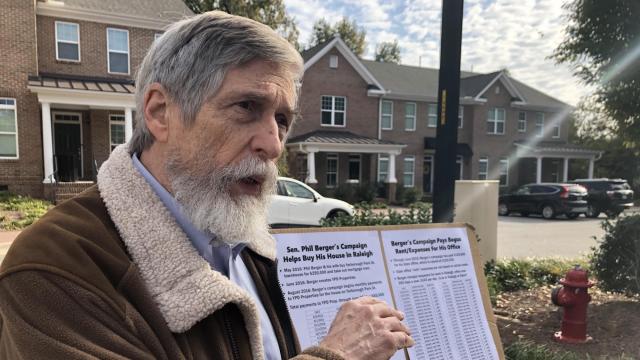 Raleigh, N.C. — Senate President Pro Tem Phil Berger's political campaign is buying him a home in Raleigh, and the State Board of Elections told him that's allowed under North Carolina campaign finance law.

Berger's campaign has paid at least $55,000 since August 2016 to a company he created, YPD Properties LLC. YPD is a property management company, and it appears to be a pass-through entity for campaign rent payments that ultimately pay the mortgage for a townhouse near downtown that Berger, R-Rockingham, and his wife bought in May 2016.

Long-time campaign finance watchdog Bob Hall held a press conference outside the townhouse Wednesday morning, then filed a formal complaint with the State Board of Elections, which enforces campaign finance rules. While others use campaign money to rent apartments or pay hotel bills, Hall said this is different because Berger bought an appreciating asset.

"This kind of trickery and manipulation of the law for personal gain must be stopped," Hall, the retired head of of Democracy North Carolina, said in his complaint. "It converts a legislator's campaign account into a personal piggy bank."

Berger's campaign said it got pre-approval on the arrangement from Kim Strach, who in 2016 was the State Board of Elections' executive director. Strach was replaced this year after Democrats took a majority on the state board, but Steve Long, the Republican attorney who filed initial paperwork for YPD, reached out in February to confirm the guidance.

Berger's fundraising operation said the board's assistant general counsel re-confirmed that guidance over the phone. WRAL News is seeking confirmation on that. Long is also a General Assembly appointee to the University of North Carolina Board of Governors.

Dylan Watts, the Republican Senate caucus director, provided a copy of Strach's initial email approving the arrangement in July 2016. In it, Strach said the campaign could pay only fair market value but that the law allows the structure Long described.

"There is no prohibition against paying the LLC, even if the property owners are Senator and Mrs. Berger," Strach wrote.

Strach now heads up a search committee for the Board of Governors that will eventually help choose the UNC system's next president. Her husband, Phil Strach, has for years been a lead attorney for Republican legislators, defending a series of voting rights and redistricting cases filed by Democrats and various left-leaning groups.

Watts called Hall a "scumbag" and a "bottom feeder."

"This is a pathetic attempt by a phony advocate trying to muddy the waters with another baseless attack, days before the Governor's top advisor is schedule to answer for the ACP scandal," Watts said in an email, referencing Republican lawmakers' plans to hold a hearing Friday and question Cooper administration officials about the Atlantic Coast Pipeline's permitting process.

"Senator Berger is widely considered the cleanest politician in the state," Watts said. "Bob Hall is doing his boss's dirty work by trying to sully the reputation of a decent man to give cover for the Cooper administration's shady dealings.”

Hall said in his morning press conference that Berger's arrangement "doesn't pass the smell test." In his letter, Hall noted that the Bergers recently purchased a second home in Raleigh, this one a $370,000 condominium closer to downtown Raleigh than the townhouse, which is off Capital Boulevard near the Wake Forest Road split.

The mortgages on both homes have a "second home rider," Hall said, that say the Bergers can't rent the properties out or give a management firm control over them.

Watts said the Bergers are moving and won't keep both homes. The campaign will pay rent for the new home, he said.

Hall said he's seen only one other arrangement like Berger's in years of combing through tens of thousands of campaign entries. That was House Speaker Tim Moore, whose campaign paid close to $23,000 from 2013 to 2016 in rent for a condominium he owned in Raleigh.

Moore's spokesman provided another Strach email to WRAL News on Wednesday, this one from December 2015. It says essentially the same thing she told Berger's campaign in 2016.

"There are no statutes in Chapter 163 that define the type of entity that may act as a landlord for a candidate or other political committee," Strach wrote at the time. "Therefore, there is no prohibition against paying an LLC."

These expenses were also questioned during a State Board of Elections audit completed two years ago, and the campaign said the costs helped cover a shared secretary, telephone and utilities. The campaign also provided real estate appraisals from the area to make its case the rent was appropriate.

Hall called the estimates used to justify the monthly figure "fanciful." He also questioned how Berger uses the $104 per diem he's entitled to for every legislative day spent in Raleigh. This is taxpayer money meant to defray lawmakers' living costs.

"Unless the State Board of Elections takes action," Hall wrote in his complaint, "politicians will continue to profit handsomely by funneling campaign contributions to themselves, directly or indirectly, to pay for inflated expenses and subsidized assets."

Whatever investigation the State Board of Elections does will largely proceed in secret, as laid out in North Carolina law. If penalties are charged, the hearing would be public.

After his press conference Wednesday, with media still watching, Hall approached the Berger's townhouse and rang the doorbell. No one answered.