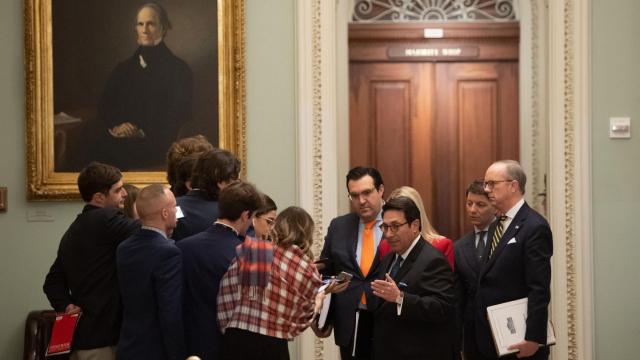 CNN — After three days of listening to arguments from the House impeachment managers, now it's the President's legal team's opportunity to take control of the Senate floor to deliver their side of the story, detailing the defense of President Donald Trump against the two articles of impeachment.

The defense counsel's presentation Saturday sought to poke holes in the Democratic case, arguing the House didn't provide the full context during their argument and using snippets of witness testimony from the House Intelligence Committee to argue there was no quid pro quo with Ukraine.

"We don't believe that they have come anywhere close to meeting their burden for what they're asking you to do," White House counsel Pat Cipollone said. "In fact, we believe that when you hear the facts, and that's what we intend to cover today -- the facts -- you will find that the President did absolutely nothing wrong."

Cipollone told senators he intends to go through the record that was established in the House.

"We intend to show you some of the evidence that they introduced in the House that they decided over their three days and 24 hours that they didn't have enough time or made a decision not to show you," he said, arguing that House impeachment managers are "asking you not only to overturn the results of the last election. ... They're asking you to remove President Trump from the ballot in an election that's occurring in approximately nine months."

Unlike Tuesday's arguments over rules for the trial, the President's defense team came prepared with visual aids -- PowerPoint slides and videos -- to supplement their argument, like the House impeachment managers. They played clips from the impeachment inquiry hearings they say the Democrats failed to show during their three-day presentation.

The President's team, for instance, spliced together US Ambassador to the EU Gordon Sondland saying repeatedly that he "presumed" there was a connection between the hold-up of US security assistance and Ukraine opening investigation into the President's political rival, arguing there was no direct evidence of a quid pro quo.

The first clip the defense team played was House Intelligence Chairman Adam Schiff, the lead impeachment manager, describing the President's phone call with Ukrainian President Volodymyr Zelensky at a September hearing -- comments that Republicans and the President have attacked for months.

As Trump lawyer Mike Purpura showed the video, Schiff looked at him and watched along without expression.

The President's personal attorney Jay Sekulow told the Senators to "put ourselves in the shoes of the President of the United States," outlining the investigation into his 2016 campaign and the Robert Mueller investigation into Russian interference in the 2016 election as justification for why Trump would not "blindly trust" his administration's intelligence agencies.

"Disagreeing with the President's decisions on foreign policy matters or whose advice he's going to take is in no way an impeachable offense," Sekulow argued.

Cipollone began by noting that the President's team did not plan to use the entire 24 hours allotted to them, adding that his team would "finish efficiently and quickly so that we can all go have an election."

The President's team is delivering its presentation as Senate Republicans feel more confident that the House managers did not convince enough fence-sitting Republicans to vote for additional witnesses that would extend the trial beyond next week — and that the trial is now the defense team's to lose.

The President's team, led by Cipollone and Sekulow, is expected present for two-to-three hours on Saturday. Moments before the trial started Saturday, House impeachment managers pushed four carts of evidence from the House to the Senate, officially filing a 28,578-page trial record.

Sekulow told reporters Saturday's presentation would be a "sneak preview" of the full argument they will deliver beginning on Monday. A source from the President's team said the defense would "present a robust defense on both the facts and the law, on the substance of the President's conduct."

The President's team is delivering its presentation as White House and Senate GOP sources say they are confident they will defeat a vote next week for additional witnesses that would extend the trial beyond next week. The sources say they are likely to lose two GOP votes, but expect to keep the defections under the four that Democrats would need to subpoena more witnesses and documents, and if the vote fails the Senate could move to acquit Trump by the end of next week.

The White House and Senate Majority Leader Mitch McConnell they have been laying the groundwork for weeks to lock down opposition to moving forward with new witnesses, including a lunch this week with former George W. Bush administration Attorney General Michael Mukasey to argue that calling witnesses could spark thorny legal issues with executive privilege.

Sekulow has signaled that the defense team is likely to go after former Vice President Joe Biden and his son Hunter Biden, as well as the Russia investigation into the President and the opposition research dossier from ex-British intelligence agent Christopher Steele.

"They opened up the door as wide as a double-door on the Hunter Biden, Joe Biden, Burisma issue -- I guess that was their way of getting ahead of it -- we will address it," Sekulow said on Friday. "Joe Biden was charged as vice president of the United States with Ukraine policy. That was his specific charge. His son went to work ... for the board of a Ukrainian gas company."

Schiff delivered a lengthy and full-throated argument for removing the President from office to conclude the House's opening argument Friday evening. The House managers took time in their presentation to try to get ahead of the arguments they're anticipating from the President's team, and Schiff used a significant portion of his closing speech Friday to run through the President's arguments that the Bidens were corrupt, that Trump had reason to withheld the aid to Ukraine and that the process was unfair.

"When they say the process was unfair, what they really mean is don't look at what the President did," Schiff said.

Trump, meanwhile, offered some advice to his legal team Friday in an interview with Fox News.

"What my people have to do is just be honest, just tell the truth," he said.