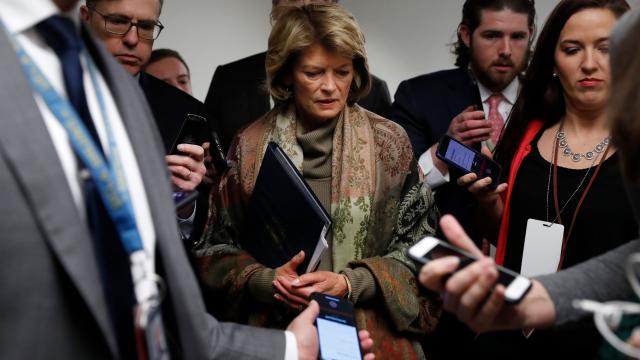 CNN — The Senate on Friday voted to block any witnesses from being called in President Donald Trump's impeachment trial, a move that marked the beginning of the end of the third Senate trial for a president in US history.

Senate leaders struck an agreement to hold the final vote to acquit Trump on the two articles of impeachment on Wednesday at 4 p.m. ET, following a debate throughout the day on Friday about how to bring the trial to a close.

The timing means that the acquittal vote will occur after Trump comes up to Capitol Hill to deliver the State of the Union address on Tuesday evening.

The Senate will vote on a resolution Friday evening from Senate Majority Leader Mitch McConnell laying out the final steps for the Senate impeachment trial. The resolution includes a closing argument of two hours each for the House managers and the President's legal team on Monday at 11 a.m., Wednesday's final vote -- and the ability for senators to deliver their own speeches explaining their votes in between.

The Senate will proceed to votes on four Democratic amendments to McConnell's resolution on Friday evening, before breaking for the weekend — a schedule that would allow Democratic presidential candidates to travel to Iowa this weekend ahead of the Iowa caucuses.

The Senate vote Friday to allow subpoenas for witnesses and documents failed 49-51, with two Republicans, Sens. Susan Collins of Maine and Mitt Romney of Utah, joining Democrats to back extending the trial.

The Senate went into an extended break after the debate on the witness vote concluded but before the vote, while McConnell and Senate Minority Leader Chuck Schumer huddled on the floor while their staffs hammer out the details on the trial endgame.

Democrats had hoped to entice more other Senate Republicans to join them to hear from witnesses -- especially in the wake of revelations from the draft book manuscript of former national security adviser John Bolton -- but one by one the Senate Republicans said they were ready to end the trial.

Their reasons differed. Sen. Lisa Murkowski, an Alaska Republican, said in a statement: "I don't believe the continuation of this process will change anything. It is sad for me to admit that, as an institution, the Congress has failed."

Sen. Lamar Alexander of Tennessee, meanwhile, said the House managers had proven their case that Trump withheld US aid while pushing for an investigation into his political rivals. "The question is whether you apply capital punishment to every offense. And I think in this case, I think the answer is no, let the people make that decision," Alexander said Friday.

Following the witness vote, McConnell is expected to move forward a final acquittal vote -- but the road to get there is rocky, and looks likely to extend into next week.

When the final vote does occur to acquit the President, it will mark the end of a remarkable, whirlwind four-month impeachment that began when House Speaker Nancy Pelosi announced an impeachment inquiry on September 24, leading to the President's impeachment on two articles -- abuse of power and obstruction of Congress -- less than three months later.

After a month delay, the Senate trial began less than two weeks ago. The House managers, led by House Intelligence Chairman Adam Schiff, presented a detailed case arguing they had overwhelming evidence that Trump withheld $400 million in US security aid and a White House meeting with Ukrainian President Volodymyr Zelensky while he pressured Kiev to open investigations into former Vice President Joe Biden and his son Hunter Biden.

"If the Senate allows President Trump's obstruction to stand, it effectively nullifies the impeachment power," Schiff said Friday. "It will allow future presidents to decide whether they want their misconduct to be investigated or not, whether they would like to participate in an impeachment investigation or not."

The President's team argued there was no wrongdoing -- but also that even if there was a quid pro quo, it was within the President's rights if it was in the national interest.

"The problem with the case, the problem with their position, is even with all of those witnesses, it doesn't prove up an impeachable offense. The articles fail," the President's personal attorney Jay Sekulow said. "They got the wish of the impeachment by Christmas, and that is goal. But now they want you to do the work they failed to do."

Collins and the other Republican moderates included a provision in the Senate trial rules to allow for Friday's witness vote, but the odds looked long for Democrats to convert four Republicans to back the vote until Sunday — when The New York Times reported Bolton's draft book manuscript alleged that Trump told him the US security aid was conditioned on investigations into Democrats, including Joe Biden.

On Friday, new allegations came from The Times from Bolton's manuscript — that Trump directed Bolton to help his attorney Rudy Giuliani get in touch with the Ukrainian president in May — which Schiff cited during Friday's witness debate.

McConnell, however, held his conference together enough to keep the witness vote at bay, with Alexander the linchpin of his bend-but-not break strategy. Until Thursday, Alexander did not tip his hand on which way he was leaning, declining to speak to reporters about it and staying quiet in GOP conference meetings. He finally asked two questions at the tail end of the two-day Senate question period in the trial, which hinted at his eventual position to oppose witnesses.

Shortly before Alexander's statement, Collins became the first Republican to back witnesses. "I believe hearing from certain witnesses would give each side the opportunity to more fully and fairly make their case, resolve any ambiguities, and provide additional clarity," Collins said.

Romney joined her in crossing the aisle for Friday's vote, but that left Democrats two short of what they needed to call witnesses.

Murkowski's statement implicitly acknowledged that had she voted for witnesses, the vote could have ended 50-50, dragging Chief Justice John Roberts into the fray.

"It has also become clear some of my colleagues intend to further politicize this process, and drag the Supreme Court into the fray, while attacking the Chief Justice," Murkowski said. "I will not stand for nor support that effort. We have already degraded this institution for partisan political benefit, and I will not enable those who wish to pull down another."

On the Democratic side, there are still a couple of undecided senators on the vote for conviction, including Sens. Doug Jones of Alabama and Joe Manchin of West Virginia. Jones said Friday he was "pretty close" to a decision, while Manchin said he hasn't yet made one.

"It's a very hard decision," he said. "It's most serious decision that any senator will make in their career."