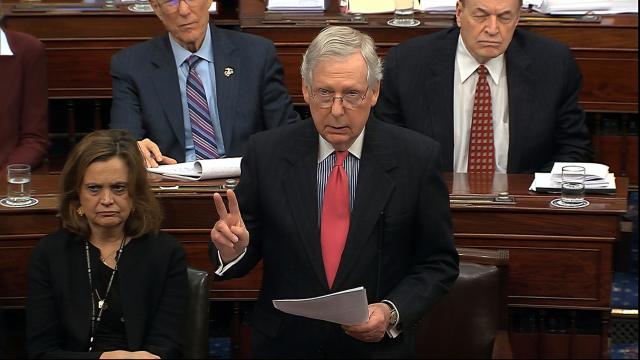 CNN — Republican Sen. Lamar Alexander of Tennessee said late Thursday he would oppose calling witnesses in the Senate impeachment trial of President Donald Trump, a decision that means the trial is all but certain to come to a swift end without hearing from witnesses or subpoenaing documents.

"I worked with other senators to make sure that we have the right to ask for more documents and witnesses, but there is no need for more evidence to prove something that has already been proven and that does not meet the United States Constitution's high bar for an impeachable offense," Alexander said in a statement shortly after the Senate gaveled out of session Thursday evening.

Alexander's decision makes it highly likely that Friday's vote on whether to seek additional witnesses will fail, with Republican senators coalescing around Senate Majority Leader Mitch McConnell's argument that allowing witnesses would lead to an indefinite delay in the trial, prompt executive privilege concerns and have no impact on the outcome of the trial. A vote to end the trial could come as soon as Friday as well.

Moments before Alexander's statement, Sen. Susan Collins of Maine became the first Republican to support calling witnesses, announcing in a statement she would support Friday's Senate vote for witnesses and documents, which she had pushed for before the trial began.

"I believe hearing from certain witnesses would give each side the opportunity to more fully and fairly make their case, resolve any ambiguities, and provide additional clarity. Therefore, I will vote in support of the motion to allow witnesses and documents to be subpoenaed," Collins said in a statement.

Sen. Mitt Romney of Utah is leaning toward voting for witnesses, too, while Sen. Lisa Murkowski of Alaska has not said how she'll vote, telling reporters as she left the Senate late Thursday night that she would read back through the two volumes of notes she's taken during the trial.

"I'm going to go back to my office, put some eye drops in so I can keep reading," she said, adding that she plans to announce her decision on Friday morning.

But even if Romney and Murkowski join Collins to back witnesses, the Senate vote would end in a 50-50 tie, and Chief Justice John Roberts is seen as highly unlikely to intervene, meaning the vote would fail.

Democrats had hoped Alexander and a handful of other GOP senators would join them in calling for witnesses in the wake of former national security adviser John Bolton's revelations in his draft book manuscript about Trump conditioning US aid to Ukraine on investigations into Democrats. But Democrats' options for a fourth Republican to join them in Friday's witness vote appear to have evaporated.

Alexander had been careful not to tip his hand before his statement, saying little as the witness vote approached. Halfway through the second day of questions, he spoke up for the first time in the trial, submitting a question for the House managers to compare the bipartisanship level of the Trump impeachment to the proceedings of Presidents Richard Nixon and Bill Clinton.

One sign of Alexander's vote came in the final hour of senator questions Thursday to the House impeachment managers and the President's legal team. Alexander and Murkowski both joined a question from Sen. Lindsey Graham, a South Carolina Republican, asking the President's counsel whether the allegations from Bolton, if true, "still would not rise to the level of an impeachable offense?"

It was the last of several hints that emerged from the 180 questions that senators asked over two days. While it turned out to be a signal of how Alexander would vote, Murkowski remains a mystery. Earlier in the evening, she asked a pointed question of the President's team that cut in the other direction: raising the contradiction between the testimony of US Ambassador Gordon Sondland and statements from GOP Sen. Ron Johnson of Wisconsin compared to the reporting about Bolton's book.

"This dispute about material facts weighs in favor of calling additional witnesses with direct knowledge. Why should this body not call Ambassador Bolton?" Murkowski asked.

When Alexander asked his first question Thursday evening, it stirred activity from both Senate leaders. Rep. Zoe Lofgren, a California Democrat who was a staffer during the Nixon impeachment inquiry and a House member in the Clinton impeachment, responded that the Nixon impeachment effort wasn't always bipartisan -- it shifted only at the end, she said -- and that she was disappointed Republicans haven't joined with Democrats up to this point. "You have an opportunity here," she said.

Senate Minority Leader Chuck Schumer, a New York Democrat, followed up the question by asking the House managers to explain how requesting witnesses could be done in a limited fashion. House Intelligence Chairman Adam Schiff, a California Democrat who is the lead impeachment manager, responded by arguing for a one-week period for closed-door depositions and a "limited" time for witness testimony for the trial, an effort to address Republican criticisms that witnesses would lead to endless delays.

McConnell, a Kentucky Republican, then asked his first question in the two days that senators have queried the House managers and the President's team, giving the defense counsel a chance to respond to the House's assertions about bipartisanship and impeachment.

Shortly after that question was asked, Alexander met with Murkowski during the dinner break, and told CNN leaving the meeting the two weren't coordinating.

"We were just talking," Alexander said, adding that the group of swing senators are "all doing things independently."

"Lisa and I often talk about what we are doing," Alexander said.

Like Wednesday's session, in which more than 90 questions were asked, many of the questions asked on Thursday were lobbed as friendly queries -- Democrats giving the managers the chance to make a point, and Republicans responding with the same tactic for the defense counsel. But key questions were interspersed both from undecided senators and to challenge the opposing side, which led to some illuminating and insightful -- and sometimes less than insightful -- responses.

Senators on the fence

On Thursday, there were even a handful of bipartisan questions with the senators considered on the fence. Collins and Murkowski joined with Democratic Sens. Joe Manchin of West Virginia and Kyrsten Sinema of Arizona to the President's team: would the President adhere to the Logan Act and guarantee that private citizens would not be directed to conduct foreign policy unless they have been designated by the government.

Patrick Philbin, a member of Trump's legal team, responded there was nothing wrong with the President directing his personal attorney, Rudy Giuliani, to deal with Ukraine, but he also maintained that the former New York mayor was not conducting any policy with the country.

Another bipartisan question followed not long after from Murkowski and Democratic Sen. Brian Schatz of Hawaii, who asked where was the line between political actions and impeachable conduct.

The House managers often turned their attention to the key Republican senators.

House Judiciary Chairman Jerry Nadler invoked Collins and Murkowski by name to circle back to their question from Wednesday about "mixed motives" with regard to the withholding of US aid and the push for investigations, charging that the defense team's argument was "nonsense" that mixed motives would exonerate the President.

"Once you prove a corrupt act, that's it," Nadler said.

Collins' later asked another question with several Republican colleagues about whether there were legitimate circumstances for a President to ask a foreign government to investigate a US citizen, including a political rival. Schiff answered that question, but the lead impeachment manager also pivoted back to the same "mixed motives," question, making eye contact with Collins in his response as she took notes.

Schiff made his pitch for the Senate to call witnesses.

"If you have any question about whether the motive was mixed or not mixed, ask John Bolton," he said.

The Senate trial began Thursday with a quick and quiet ending to a behind-the-scenes fight that simmered throughout the day on Wednesday, as Sen. Rand Paul of Kentucky pushed to ask a question that would have named the alleged whistleblower. Roberts signaled to senators earlier this week he would not read any questions that included the alleged name of the whistleblower, and GOP leaders tried to come to a resolution with Paul on Wednesday.

McConnell indirectly referenced the dispute at the start of Thursday's session. "We've been respectful of the chief justice's unique position in reading our questions, I want to be able to continue to assure him that that level of consideration for him will continue," McConnell said.

Paul went to the Senate television studio right after the question was rejected, and read it there to reporters, which included the alleged name of the whistleblower and asked about connections with a member of Schiff's staff.

Later in the day, a group of Republicans asked another question about the member of Schiff's staff and the alleged whistleblower that named only the committee aide. Roberts read that question.

Schiff responded that he was "appalled" at the attacks on his staff, saying he would not respond to the smears coming from a newspaper article. "Members of this body used to care about the protection of whistleblower identities. They didn't use to gratuitously attack members of committee staff. But now they do," Schiff said.

The President's personal attorney, Jay Sekulow, responded that the whistleblower has protection from retribution, but not "complete anonymity."

"We can't just say it's not a relevant inquiry to know who on the staff that conducted the primary investigation here was in communication with that whistleblower, especially after Mr. Schiff denied that he or his staff had even had any conversations with the whistleblower," Sekulow said.

Democrats, meanwhile, were incensed with several answers the President's team offered. Sen. Mark Warner, the top Senate Intelligence Committee Democrat, slammed the President's team for arguing "foreign interference, in a sense, is OK if it doesn't fall into the classic definition of a campaign contribution."

And numerous Democrats criticized Harvard law professor emeritus Alan Dershowitz for arguing the President cannot be impeached for a quid quo pro if he thinks he's acting in the national interest. "If a President does something which he believes will help him get elected in the public interest, that cannot be the kind of quid pro quo that results in impeachment," Dershowitz said.

"Republicans have gone from denying what the President did, to normalizing it by claiming every President does it, to now saying there's nothing wrong with it even if he did it," Schumer said Thursday.

Dershowitz tried to clean up the response on Twitter Thursday, saying: "They characterized my argument as if I had said that if a president believes that his re-election was in the national interest, he can do anything. I said nothing like that, as anyone who actually heard what I said can attest."

Republicans defended the President's attorney. "He makes a lot of very extreme examples to make his point," said GOP Sen. Kevin Cramer of North Dakota. "I have a tendency to do the same thing from time to time and sometimes that can be misconstrued."

While much of the focus is on the Republicans, some moderate Democrats have yet to say how they will vote on the outcome of the trial. "Am I wrestling with it? Every minute of every day," Manchin said Thursday, adding he was "still in shock" over Dershowitz's comments.