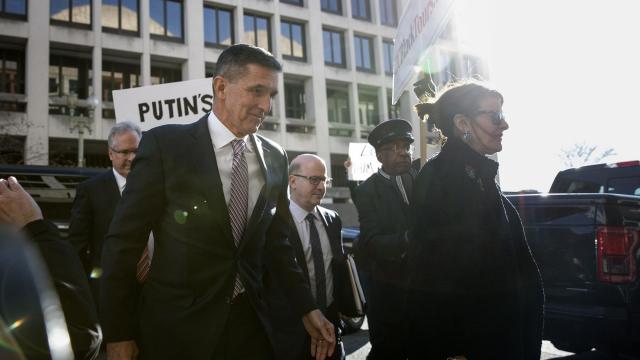 CNN — Senate Republicans on Wednesday released a list of Obama administration officials who sought to "unmask" names of Americans in intelligence reports in the weeks before President Donald Trump took office, the latest salvo to discredit the FBI's Russia investigation and accuse the previous administration of wrongdoing over the prosecution of Trump's first national security adviser, Michael Flynn.

On their own, the documents do not prove any wrongdoing. The unmasking requests are a routine part of intelligence work, and there's no evidence that the requests were made for political purposes. The National Security Agency said in its declassified memo disclosing the names that all of the officials had the authority to view the reports and the NSA's standard procedures were followed.

In the NSA foreign intelligence reports, the names of Americans are redacted, or "masked." Certain authorized US officials have the authority to request the names of those individuals if they have a justifiable reason. As a result, when the officials made the unmasking requests declassified on Wednesday, they wouldn't have known whether Flynn was the individual whose identity was redacted.

Grenell, a fierce Trump loyalist, requested earlier this month that NSA Director Gen. Paul Nakasone produce a list of individuals who made unmasking requests that could have identified Flynn between November 8, 2016, and January 31, 2017. The list includes top Obama officials and former Vice President Joe Biden, the presumptive Democratic presidential nominee whom Trump's critics have increasingly tied to the Flynn investigation in recent days. During the transition, Flynn made phone calls to foreign officials and later lied about what he discussed to the FBI. The calls were picked up in surveillance of foreign diplomats.

Nakasone wrote in a May 4 memo to Grenell that the individuals who made the requests were authorized and that the "unmasking was approved by through NSA's standard process, which includes a review of the justification for the request."

"While the principals are identified below, we cannot confirm they saw the unmasked information," the memo says.

The context of the unmasking requests and the content of the reports the officials were looking at is unknown, as the declassified documents only include the date of the request and the individual who sought it.

There are many reasons that the officials would have made the requests. Asked about the justification for unmasking in his 2017 interview with the House Intelligence Committee, former Director of National Intelligence James Clapper explained to the panel that he did not typically provide justification for unmasking specific individuals because such requests were typically made for all US persons in a report in order to understand "context" and "significance."

"Whatever rationale people write, it really boils down to one thing, which is to understand the context of the particular (signals intelligence) report you are reading," he said at the time. Clapper also told CNN's John Berman on "New Day" Thursday that he didn't know in advance that Flynn was the individual in question.

But the declassified memo is the latest document that Trump and his Republican allies are pointing to as part of their efforts to discredit the Russia investigation and accuse President Barack Obama and his administration of wrongdoing, after Attorney General William Barr moved to drop Flynn's charges of lying to the FBI last week.

It is extremely uncommon for the US government to publicly reveal classified details about US surveillance of foreign diplomats and how the information circulates among senior US officials. By taking this rare step, Grenell provided more fodder to Trump and his allies to try to rewrite the history of the Russia investigation and discredit Biden.

The Trump campaign quickly issued a statement attacking Biden for being listed in the memo, while Sen. Rand Paul, a Kentucky Republican, held a news conference minutes after the information was released and invited Grenell to testify in the Senate next week, though Grenell is not going to appear.

"It's one of the very big stories and I suspect you'll have, if it's possible, even bigger stories coming out," Trump said during a meeting at the White House Wednesday.

Biden campaign spokesman Andrew Bates said that the declassified documents "simply indicate the breadth and depth of concern across the American government -- including among career officials -- over intelligence reports of Michael Flynn's attempts to undermine ongoing American national security policy through discussions with Russian officials or other foreign representatives."

The Republican senators who released the documents, Grassley and Johnson, said they weren't alleging Biden committed any wrongdoing, but argued the information presented questions they wanted answers to.

Flynn pleaded guilty for lying to the FBI about discussing sanctions with Kislyak during the transition, which Vice President Mike Pence and other senior Trump officials falsely denied had occurred. It's unknown, however, whether the unmasking requests are related to those conversations.

"The action raised red flags -- not the person doing it," said a Democrat familiar with the administration's actions during the transition. "That's why they requested the unmasking to learn more about why."

Grenell asked the NSA for the information to be declassified in early May, according to Nakasone's memo, and Grenell declassified the information on May 8. He provided it to Johnson and Grassley on Wednesday after they requested it a day earlier. The senators said in a statement that the officials identified "should confirm whether they reviewed this information, why they asked for it and what they did with it."

The officials included in the declassified memo who made unmasking requests include Clapper, Obama's White House chief of staff Denis McDonough, then-FBI Director James Comey, then-US Ambassador to the United Nations Samantha Power, then-CIA Director John Brennan and Biden. Some of these officials, like Power, have already testified about unmasking before the House Intelligence Committee in 2017 and 2018. CNN has sought comment from the officials listed in the report.

"I do not remember anything like that," John Tefft, the former US Ambassador to Russia, told CNN when asked about being on the list Senate Republicans released Wednesday. Tefft said he was always very careful not to get involved in the Flynn matter, and did not recall any unmasking request he made unrelated to Flynn during that time. He was never contacted by ODNI or Senate Republicans about being on the list, he said.

Overall, the level of unmasking has increased under the Trump administration in the last three years. There were more than 10,000 unmaskings last year and nearly 17,000 in 2018, according to ODNI's Statistical Transparency reports. There were 9,529 in 2017 during Trump's first year in office.

When unmasking happens, identifiable information about an American is revealed to the official who asked for it. This could be a person's name or address, or the name of a company.

The documents released Wednesday show that Power made unmasking requests seven times between the 2016 election and Trump's inauguration in 2017. Five of her unmasking requests were in the run-up to a pivotal UN vote about Israeli settlements. The Obama administration was going to "abstain," which would allow the vote to pass. This was a break from past US policy, including under Obama, to "veto" the resolution because it said Israeli settlements were illegal.

Trump, his son-in-law Jared Kushner and Flynn spoke with foreign government officials about the vote. In his conversations with Kislyak, Flynn asked if Russia would delay the vote or veto the resolution, undermining US policy, according to court filings and the Mueller report.

CNN reported in 2017 Obama's national security adviser Susan Rice, who is not listed in the declassified documents, gave an explanation for why she had unmasked senior Trump officials during the transition: She was trying to understand why the crown prince of the United Arab Emirates was in New York in late 2016, when the UAE did not tell the Obama administration that he was coming.

CNN previously reported that the crown prince, Sheikh Mohammed bin Zayed al-Nahyan, was in New York to meet with several top Trump officials, including Flynn, Trump's son-in-law, Jared Kushner, and his top strategist at the time, Steve Bannon. Some House Republicans said at the time they were satisfied by Rice's explanation as to why she had done the unmasking.

This story has been updated with additional developments and reaction.