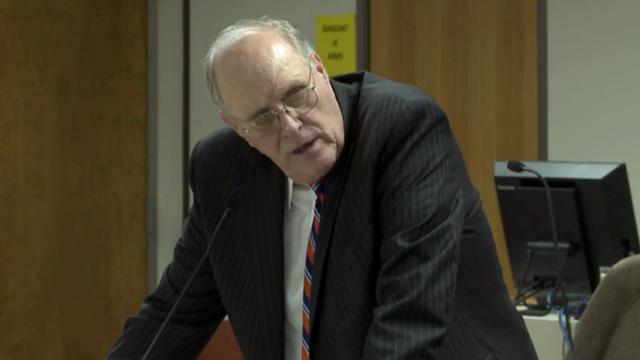 The public dressing-down took place during the committee meeting, where the panel was discussing a proposal to make changes to the charter school approval system.

In 2013, state lawmakers threw out the existing charter school board at the Department of Public Instruction, which charter school supporters said was antagonistic toward charters. It was replaced with a new Charter School Advisory Board, staffed with appointees in favor of charter school expansion.

Even so, Tillman said Wednesday, too many charter applications are still being denied.

"I want to be frank with you – we have a very newly established charter advisory board," Tillman, R-Randolph, told the committee in explaining Senate Bill 793, which would ease the application rules. "The process was flawed, and many mistakes have been made in that process."

Tillman said he believed "biases" were behind DPI's refusal to grant some charters, including to some out-of-state corporate virtual school firms.

"I don’t care if it’s an EMO," Tillman said, referring to education management organizations, which he described as "a financially managed group that promotes charters in other locations outside North Carolina."

"They’re viable organizations. For some reason, some folks don’t like EMOs," he said. "I don’t care whether they’re privately managed or corporately managed."

EMOs include groups like K12 Inc, a virtual for-profit charter school that's been trying to expand into North Carolina but has been blocked by the courts. K12 has run into difficulties recently in states like Virginia, Tennessee and Colorado, where districts have dropped its curriculum due to poor academic outcomes.

Tillman didn't identify the charter school to which he was referring, saying only that if North Carolina is denying charters to qualified groups with charters in other states.

"I think we got a flaw in the thinking there, and I want that corrected," he said. "If these changes do not take place – not just on paper, but in the mindset – then other things will be considered."

The unusual tirade took other committee members aback, prompting them to ask for more information about the problem.

After the meeting, Tillman again declined to identify the charter whose denied application sparked his outburst, saying only, "There's more than one."

Meanwhile, Medley explained that, while his office acts as staff to the appointed Charter School Advisory Board, it's the board, not his office, that decides whether to recommend that the State Board of Education accept or deny applications.

"Their mission statement is that the CSAB works 'to ensure the existence of high-quality charter schools in North Carolina,'”  he explained.

According to Medley, the Office of Charter Schools received 71 applications by the Jan.1, 2014, deadline for the 2015-16 school year. Nine were incomplete, and the Charter School Advisory Board's subcommittees reviewed the other 62.

"Forty-two of those applications were not invited back for an interview," Medley told WRAL News, adding that the advisory board "went back and examined these applications again. One was brought forward."

In all, Medley said, 20 applications reached the interview stage, with one still pending. Eleven of those were recommended to the State Board of Education for approval.

"Four of these [recommended] applications were partnering with management companies," Medley said, adding that all review comments about each application are publicly available. "You can gauge the depth of the review by the CSAB members based upon their comments and votes from the documentation online."

Medley confirmed that K12 Inc. had applied, but was not granted an interview.

"I'm not upset with the process. I'm upset more than anything with what I see as a mindset," Tillman told WRAL News. "I think they're looking for excuses to deny, and I want them to look for reasons to approve. That's a mindset I like to see changed."

The Senate Education Committee is likely to vote on Senate Bill 793 next week.