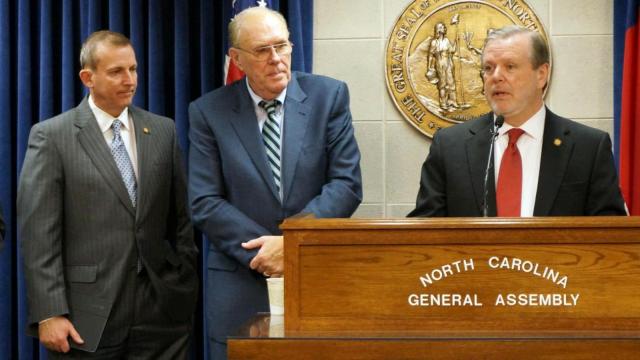 Raleigh, N.C. — Senators are putting forward an economic development plan that would lower income taxes for some large corporations to zero.

"It is our belief that corporations will still pay a significant amount of taxes under this legislation," Berger said.

The more sweeping change to corporate tax law is more complicated. Currently, corporate taxes are based on a combination of how many employees the company has in the state, the size and value of its buildings and how much it sells in the state.

Berger's bill would move to a "single sales factor," meaning companies would be taxed just on what they sell in North Carolina. Companies that don't sell any of their product or service in North Carolina would pay no tax.

Lawmakers could not immediately say how much these changes would cost the state but promised to provide those estimates. In a presentation Tuesday, Commerce Secretary John Skvarla said North Carolina could not afford the change to single sales factor.

"I would say we could not afford not to do it," Berger said, noting other states in the Southeast, including South Carolina, are already using single sales factor to lure companies.

"It breaks the bank. It breaks the promises of last year's tax reform," McCrory said during a presentation to members of the North Carolina League of Municipalities. "I also think it divides North Carolina, which is the last thing we want to do."

Berger was just as quick to fire back.

"I’m trying to comprehend how the governor wants to spend $1 billion on new incentives but considers it ‘breaking the bank’ to allow North Carolina taxpayers and job-creators to keep about $500 million of their own money. The math does not add up,” he said in a statement.

Other lures in the package

Senate leaders also plan to use more traditional lures for businesses, including:

The Senate package is something of a rejection of proposals by McCrory and the state House, which focused on extending JDIG and extending or creating new programs for specific industries. For example, McCrory has pushed hard for a tax credit for those who redevelop historic mill buildings and warehouses.

“The governor needs to accept responsibility for rapidly draining his jobs incentive fund and directing close to 90 percent of the state’s incentive money to its richest three counties, including his own," Senate Majority Leader Harry Brown said in a statement. "These counties already receive a disproportionate share of sales tax and transportation funds, and it’s time for the 97 other counties in this state to be treated with respect."

Efforts to push certain tax credits have been blasted by conservative groups, which say North Carolina should not be in the business of corporate giveaways.

Donald Bryson, state director for Americans for Prosperity, one of those conservative groups, said he gave the Senate bill a "nine-tenths endorsement." He takes issue with plans to extend JDIG and create a new program to lure a manufacturer, but he likes the changes to the corporate income tax.

"This bill is much better than what the House put forward," Bryson said."It gives us two years to wean the state off the drug that is corporate welfare."

"The corporate tax cuts in the Senate’s proposal would further reduce revenue for investments in our public schools and universities and other building blocks that help drive the success of businesses," Alexandra Sirota, director of the left-leaning Budget & Tax Center, said in a statement. "Businesses need an educated workforce and modern infrastructure to be successful. Cuts to the tax rates for profitable corporations or changes to the way corporate income is considered for purposes of taxation also won’t address falling wages for the average North Carolinian."