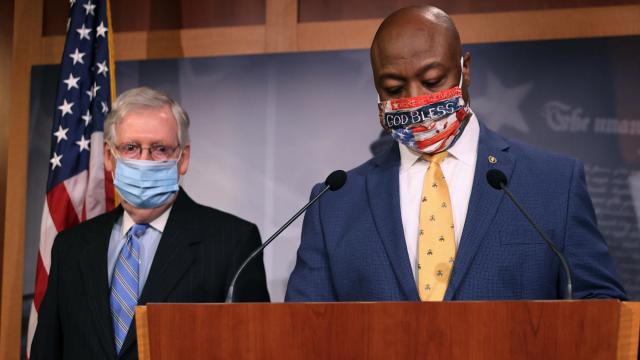 CNN — A Republican policing reform measure collapsed in the Senate on Wednesday when Democrats lined up to block it after criticizing the legislation as an inadequate response to nationwide calls for action to address police misconduct and racial injustice.

The move by Democrats caps weeks of calls from both parties to move quickly on police reform amid protests and civil unrest across the country following high-profile episodes of police use of deadly force that sparked a national backlash. But efforts to find common ground have largely devolved into bitter, partisan finger-pointing, underscoring how a deep partisan divide may result in stalemate on the issue on Capitol Hill.

Senate Democrats denied Republicans the 60 votes needed on a procedural vote to begin debate on the bill on Wednesday, which was led by Tim Scott of South Carolina, the only Black Republican senator. As a result, the vote failed, meaning that lawmakers will not be able to open debate, offer amendments, or move to a final vote on passage.

House Democrats are planning to bring a Democratic-crafted policing proposal to a vote in their chamber on Thursday and House Speaker Nancy Pelosi had said last week that she had hoped to bring the Democratic legislation to conference with the Senate GOP proposal to reconcile differences.

But the possibility of the two parties finding enough common ground to enact a reform measure now looks increasingly like a remote possibility.

"Well, we will let you know," McConnell said ahead of the procedural vote. "It can be done under a motion to reconsider at any point."

Two top Republican leaders -- Sens. John Cornyn of Texas and Roy Blunt of Missouri -- suggested on Tuesday that if Democrats filibuster the Scott policing reform bill, then it's almost certainly dead for the year.

"There probably is no path forward in this Congress if they block debate tomorrow," Blunt, a member of GOP leadership, told reporters on Tuesday.

Cornyn said he doesn't think there will be bipartisan talks if the bill goes down on Wednesday.

"I mean why would we want to do this behind closed doors? Why can't we do this on the floor of the Senate where everybody in the world could see?" he asked.

Senate Democratic leaders made their opposition to the measure clear earlier in the week.

"The Republican bill, as is, will not get 60 votes. There's overwhelming opposition to the bill in our caucus," Senate Democratic Minority Leader Chuck Schumer said on Tuesday, adding, "The Republican majority has given the Senate a bad bill and proposed no credible way to sufficiently improve it."

In a letter to McConnell on Tuesday, Schumer wrote that the GOP bill is "not salvageable," and that Democrats were demanding a bipartisan negotiation ahead of a floor vote.

Scott, the lead sponsor of the legislation, said on Tuesday that he's uncertain if there's a path forward on police reform this year if Democrats block his bill.

"What happens if it fails? That's a question I can't really answer at this point," he said.

An aide to Scott told CNN that on Tuesday at the Senate GOP lunch the senator played for his GOP colleagues hateful and racist voicemails his office has received in recent days. One Republican senator suggested he increase his own personal security.

Scott told The New York Times that the hateful and racist messages have become more intense in recent days.

"It's interesting that we are on the right side of the police reform conversation, yet we're on the wrong side according to the people, based on the way that we are characterized in the national press," Scott told the Times.

Republicans were already going after Democrats ahead of Wednesday's procedural vote, a sign of the partisan discord surrounding debate over the issue.

Cornyn said that Democratic opposition to beginning debate on a police reform bill is "completely insane" and said he is not interested in negotiating with "hostage takers."

"It's completely insane," Cornyn told reporters moments after Senate Democrats said they would block the bill on a procedural vote Wednesday unless Republicans reached an agreement with them to allow votes on amendments to change the bill.

Cornyn argued Democrats should vote to let the debate begin and allow each side to offer amendments and that Democrats could block going to a final vote if they were not satisfied with the makeup of the bill at the point.

"It's just mindless obstruction," he said. "It's the worst I've ever seen it."

"Tim Scott's bill is a half-assed bill that doesn't do what we should be doing, which is doing honest police reform," Sen. Mazie Hirono, a Hawaii Democrat, said earlier this week.

Connecticut Democratic Sen. Richard Blumenthal explained his party's concerns with the GOP bill on Tuesday, saying, "The Republican bill is really just disastrously weak it betrays the demands for justice and change that I have seen, day after day in Connecticut," he said.

While there is some overlap between the GOP and Democratic proposals, there are also key differences in the proposals that have created sticking points.

The GOP plan has a major emphasis on incentivizing states to take action, while the Democratic plan has a focus on setting national standards, such as mandates for federal uniformed officers to wear body cameras and banning chokeholds.

The Republican proposal does not include an outright ban on chokeholds but Scott argued earlier this week "we get very, very close to that place" by blocking federal grant funds to departments that don't ban chokeholds themselves.

Another major sticking point between Democrats and Republicans is whether to overhaul qualified immunity for cops so it's easier to sue them in civil court. The House Democratic bill overhauls the standard, while Scott's Republican bill does not.