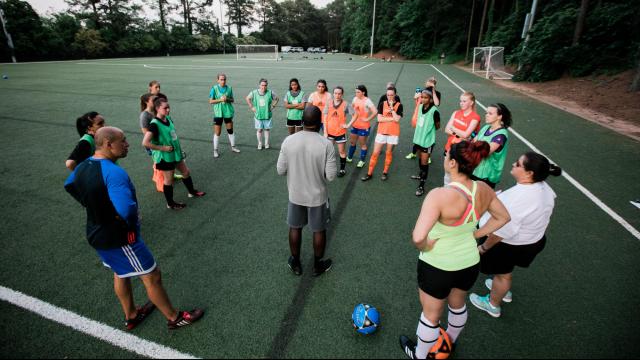 There's lots of great women's soccer around here thanks to all of the universities we have in the region. And there's a huge appetite for the sport - judging from the sell-out crowd that packed the WakeMed Soccer Park in Cary two years ago for a U.S. Women's Soccer game and the youth soccer fields that are peppered with girls with big dreams (my own included).

So I'm really excited about the launch of a new semi-pro women's soccer team here in the Triangle. The Oak City Futbol Club is a competitive women’s soccer team. The goal, Lindsey DeLorenze, Oak City's owner, tells me, is to ignite women’s competitive soccer in North Carolina and offer women soccer players an opportunity to improve their level of play and to reach the National Women's Soccer League.

Eight games are scheduled this season, which starts with a 6:30 p.m., Saturday, game at WRAL Soccer Park on Durham Bulls Stadium, field 6, in north Raleigh. The address is 7700 Perry Creek Rd. There will be three more home games (June 25, July 9 and July 10), along with conference, regional and national tournaments near the end of July.

Oak City has joined the Women's Premiere Soccer League, which started in 1998 and now has more than 100 teams across the United States. It's considered the largest women’s soccer league in the world. DeLorenze also is the league's regional commissioner of the Carolinas.

“We’re proud to present Oak City FC’s first season in the WPSL and bring back competitive women’s soccer to North Carolina,” DeLorenze said in a press release. “It is exciting to have such a strong start for our region, including teams from across North Carolina and South Carolina, providing the athletes a wide range of competition and exposure. Our team will be pulling from local colleges and players from across the U.S. who are interested in joining Oak City FC family.”

Tickets are on sale. They are $6 for individual games and $20 for the season.