Selma, N.C. — A community is raising money to help a family of four that was poisoned by carbon monoxide after they used a generator to heat their home Friday night.

According to firefighters, the family had no electricity at their home on Jordan Narron Road and used a gas-powered generator to warm their home. Saturday evening, Chief Paul Zias from the Thanksgiving Volunteer Fire Department said someone had stepped up and offered to pay to turn the family's electricity back on.

To hide the the generator and keep it dry during Friday night's rain, the family placed it under their back deck, firefighters said, which caused the exhaust to enter directly into the home's crawlspace.

Officials said a family member called 911 for help after waking up feeling sick.

Firefighters said they found dangerously high levels of carbon monoxide inside the home. Pets living inside the home were vomiting, and one man was still in his bed and unable to get up, they said.

An unsafe amount of Co in the blood is 15 parts per million. Officials said the lowest found among family is in the 30 ppm. 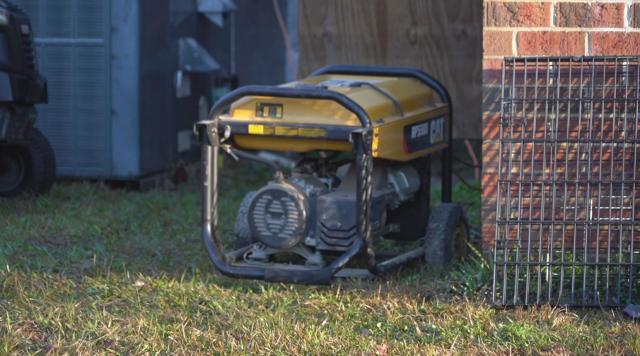 Zias said three of the victims were already on the front porch of the home but all were suffering from carbon monoxide poisoning when crews arrived.

Crews at the scene said an 18-year-old, his parents and his grandmother lived inside the home. The grandmother was transferred to Duke Hospital for advanced treatment, including the use of a hyperbaric chamber.

The other three family members were being treated with oxygen and should be released from the hospital later Saturday.

Zias said the family is lucky to be alive and warned that carbon monoxide levels that high can kill humans and pets.

Anyone who uses a generator should do so only in well-ventilated areas away from living or working areas, the chief said.

The family said their generator had been running for two days. Local fire departments are working to raise money to provide an adequate heating system for the family.