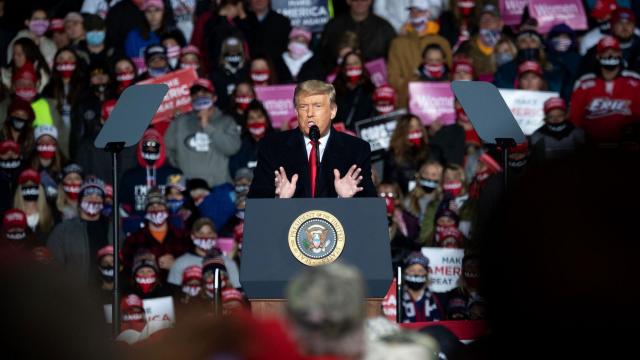 CNN — More than 700 economists, including seven Nobel Prize winners, are urgently warning against the reelection of President Donald Trump, citing what they describe as a "sustained assault" on democracy, a fumbled response to the pandemic and the spread of "dangerous misinformation."

"In just one term in office, Donald Trump has rendered the United States unrecognizable, and has faced no consequences for doing so," the economists wrote in an open letter, which is being updated until the November 3 election.

"For these reasons, we strongly recommend that the electorate do what no one else can: reclaim your democracy by voting to remove Donald Trump from office," the economists wrote.

In response, the Trump campaign noted that the letter says little about Joe Biden, the president's opponent.

"It speaks volumes that in their baseless admonition of President Trump, these left-wing academics couldn't name a single reason why they believe Joe Biden would do anything positive for the American economy," Samantha Zager, the Trump campaign's deputy national press secretary, told CNN Business.

Trump has claimed that he is the better candidate for the economy, which he notes has bounced back from the depths of the recession in the late winter and early spring.

"Joe Biden led the slowest economic recovery since the Great Depression and promises to tax Americans into oblivion and shut our nation back down as we rebuild our economy," Zager said, referring to the Great Recession that started in 2007, before President Barack Obama was elected president.

When Trump won election in 2016, he inherited a healthy economy and a stock market near record highs.

The open letter follows a similar effort in 2016 that failed to derail Trump's successful bid for the White House. At the time, at least 790 economists urged Americans not to elect Trump, citing a "deep ignorance of economics and an inability to listen to credible experts."

Response to the pandemic

In their current letter, the economists express dismay over Trump's "selfish and reckless behavior" during the pandemic.

"His personal behavior during the Covid-19 outbreak endangered public health, the economic recovery, and the safe re-opening of schools," the economists wrote. "He undermined mask use and social distancing, held indoor rallies, encouraged the use of unproven and potentially dangerous medical substances, downplayed the severity of the pandemic, and hosted a superspreader event that incapacitated the White House and forced military leadership into quarantine."

The pandemic has killed more than 222,000 Americans since March.

"He regularly spreads dangerous misinformation, even during times of crisis," the letter said.

A recent study concluded that Trump was likely the largest driver of Covid-19 misinformation. The economists also say Trump "consistently undermined the independence and credibility of our major health agencies," including the FDA, CDC and National Institutes of Health.

Christopher Sims, a Princeton University professor who won the Nobel prize in economic sciences in 2011, explained to CNN Business why he signed the letter.

"There is much to criticize in the president's economic policies," Sims wrote in an email,"but for me the most important reason to oppose his re-election is the danger to our political institutions that he represents."

Even though Trump has billed himself as a CEO president skilled in negotiation, the economists take issue with the results.

"His managerial incompetence has damaged the credibility and effectiveness of the public sector," the letter said, citing the constant change in leadership at agencies and the disgruntled employees who speak out in the media.

In trade, the economists say Trump's "chaotic and ineffective approach to negotiation" has damaged relations with trade partners, hurt farmers and interrupted supply chains "without achieving his stated goal of reducing the trade deficit."

Trump ran with a focus on reviving American manufacturing and trade. But the economists say he "failed to achieve his campaign's core economic promises" because manufacturing remains a small part of overall employment and trade deficits have climbed.

The letter notes that economists at Moody's Analytics and Goldman Sachs have recently concluded that Joe Biden's proposals would generate faster economic growth.