Seizing Stage With One Idea After Another 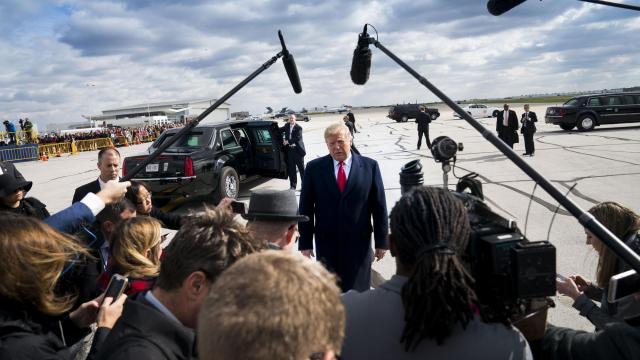 WASHINGTON — First there was the middle-class tax cut that even his allies and many of his aides had not heard about. Then troops were dispatched to the border to counter an “invasion of our country” by impoverished migrants about 900 miles away.

And then, on Tuesday, President Donald Trump declared that he would sign an executive order essentially rewriting the Constitution as it has been traditionally interpreted to stop children of unauthorized immigrants from automatically becoming citizens just because they are born in the United States, claiming power no other president has asserted.

In the last days before a midterm congressional election that will determine the future of his presidency, Trump seems to be throwing almost anything he can think of against the wall to see what might stick, no matter how untethered from political or legal reality. Frustrated that other topics — like last week’s spate of mail bombs — came to dominate the news, the president has sought to seize back the national stage in the last stretch of the campaign.

Ad hoc though they may be, Trump’s red-meat ideas have come to shape the conversation and, he hopes, will galvanize otherwise complacent conservative voters to turn out Tuesday. But he risks motivating opponents, as well, and he has put even some of his fellow Republicans on the spot as they are forced to take a position on issues they were not expecting to have to address.

Within hours of his promise to end birthright citizenship, some Republicans were denouncing the idea or distancing themselves from it. “Well, you obviously cannot do that,” Speaker Paul Ryan of Wisconsin told WVLK, a radio station in Lexington, Kentucky. “I’m a believer in following the plain text of the Constitution, and I think in this case, the 14th Amendment is pretty clear.”

Rep. Ryan Costello of Pennsylvania said Republicans in suburban districts with large numbers of immigrants were already struggling to hold on. “So now POTUS, out of nowhere, brings birthright citizenship up,” he wrote on Twitter, using the acronym for “president of the United States.” “Besides being basic tenet of America, it’s political malpractice.”

Trump has long favored eliminating automatic citizenship for children of unauthorized immigrants, but according to broad legal consensus, doing so would require a constitutional amendment to adjust the 14th Amendment, which declares that all people born in the United States, “and subject to the jurisdiction thereof, are citizens of the United States.”

But in an interview with Axios, he said he has now been told by the White House Counsel’s Office that he does not need a constitutional amendment or even an act of Congress and can instead issue an executive order declaring that the provision does not apply in the case of children born to people in the country without legal status.

“We’re the only country in the world where a person comes in and has a baby, and the baby is essentially a citizen of the United States” and is entitled to “all of those benefits,” Trump said. “It’s ridiculous. It’s ridiculous. And it has to end.”

Actually, about 30 other countries also grant citizenship at birth, and most legal scholars believe the president does not have the power to change that in the United States. If Trump follows through and signs such an order, it would presumably be challenged all the way to the Supreme Court, which would then be asked to determine whether the traditional understanding of the 14th Amendment applies.

Among those who think he would lose is George Conway III, a prominent conservative lawyer and the husband of the president’s counselor, Kellyanne Conway. In an op-ed article in The Washington Post written with Neal Katyal, a former acting solicitor general under President Barack Obama, Conway said that “such a move would be unconstitutional” and that “the challengers would undoubtedly win” at the Supreme Court.

Trump’s surprise proposal is the latest he has introduced with Election Day approaching. He recently announced that he would introduce a new plan to cut taxes for the middle class by 10 percent, a statement that caught other Republicans by surprise.

At first, he said Congress would pass it before the midterm elections even though lawmakers had recessed for the campaign and had no plans to return to Washington before the vote. Then he said he would push for passage next year, although even aides could not describe what he had in mind.

His focus on the caravan in Mexico has also inflamed the election debate. At rallies, he has depicted the group of migrants as a dire threat to the United States and vowed to make this the caravan campaign, accusing Democrats of favoring “open borders” and even suggesting that they were behind the movement of thousands of Central Americans. He ordered 5,200 troops to the border this week in a show of strength and promised to build tent cities to detain asylum-seekers.

The birthright executive order caught even the president’s supporters by surprise. Mark Krikorian, the executive director of the Center for Immigration Studies, who supports ending birthright citizenship and argues that Trump does have the power to do so on his own authority, said the rollout of the planned executive order was “sloppy” and ultimately counterproductive.

“It would have been nice if they did this a month from now or two months ago so it’s not right before an election,” Krikorian said. “Two months ago, they could have prepared talking points and sent them out, and then staffers to congressmen could read them and decide what they’re supposed to say. A month from now, it would not happen right before an election.” He added, “It doesn’t strike me as the best way to run a railroad.” Michael Waldman, the president of the Brennan Center for Justice at New York University School of Law and a former White House speechwriter for President Bill Clinton, said Trump seemed to be making stuff up as he went without any kind of vetting.

“The executive order is flatly unconstitutional. It’s pretend,” he said. “The tax cut is pretend. Sending troops to the border is expensive theater. Trump is throwing out these ever wilder ideas in the hope to dominate the news. Perhaps there will be method to the madness if he can shape the debate the week before the election. Just as likely, though, the escalating craziness will remind voters of what they don’t like about the president.”

The birthright issue was particularly uncomfortable for Republicans in places like Florida. Gov. Rick Scott, who is running for the U.S. Senate, walked away when a reporter asked if he supported Trump’s proposal. An aide later told The Miami Herald that the governor did not hear the question, but an issued statement did not answer the question, either.

Rep. Mario Diaz-Balart, another Florida Republican, said that he would “strongly disagree with the proposed executive order,” and Rep. Carlos Curbelo, also a Republican from the state, wrote on Twitter that “birthright citizenship is protected by the Constitution, so no @realdonaldtrump you can’t end it by executive order.”

Alfonso Aguilar, the president of the Latino Partnership for Conservative Principles, said that in pushing immigration in the closing days of the campaign, Trump was looking for short-term political gain that could cost Republicans in the long run.

“It helps him politically, and he’s looking particularly at Senate races where it could help energize a part of his base that’s mostly anti-immigrant and restrictionist,” Aguilar said. But, he added, “this continues to fuel the problem the GOP has with Hispanic voters.”

David Winston, a Republican strategist who advises the House and Senate leadership, said that the president’s discussion of immigration plays to the base but that wave elections like those in 1994, 2006 and 2010 have been won by persuading independents, who care more about the economy.

“Yes, you’ve got these other issues that motivate the base, but neither party’s base is large enough to win,” he said. The political middle would decide control of Congress. “That is the audience, and that’s the audience that’s focused on the economy.”

The economic numbers right now are good, Winston added, but the question is whether voters feel they are finally breaking free of a paycheck-to-paycheck lifestyle.