Washington, N.C. — At first glance, the Elmwood 1820 seems like a classic bed & breakfast in a historic mansion. However, the 200-year-old manor holds many secrets inside its walls.

The first two floors of Elmwood 1820 offer spiral staircases and antique hardwood, with grand guest rooms and a southern-style wrap-around porch. The third floor, however, still bears markings from the 1860s, when it was used as a makeshift hospital for soldiers during the Civil War. Some reports tell stories of injured Union soldiers – hospitalized in a strange land and uncertain of whether they would ever return home – carving their names in the wall, a final marking in eternity to remind history of their brief existence.

The walls hold other mysteries as well: A small hole cut in the drywall revealed a secret tunnel system that stretched across the length of the third-floor before dropping to the first floor. 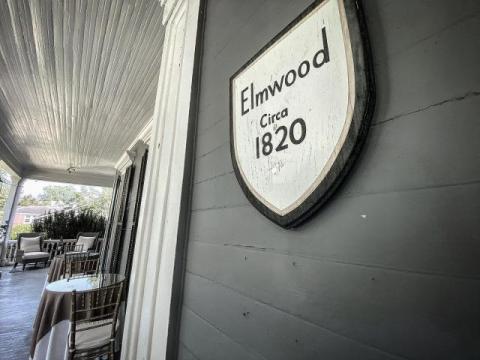 Richard Smoot and John Butler, the owners of Elmwood 1820 Bed & Breakfast, say the mansion has many unusual spaces that can be seen from the outside of the house, but have no accessible entry from the inside.

With over 200 years of history, including a transition from a plantation manor to a Union hospital and fort, it's not surprising the structure would hold many secrets. In honor of its 200th anniversary this year, the owners are working with local historians, including Leesa Jones, Director of the Washington Waterfront Underground Railroad Museum, and Stephen Farrell, archivist with the George H. and Laura E. Brown Library, to uncover the historic mysteries of the house. 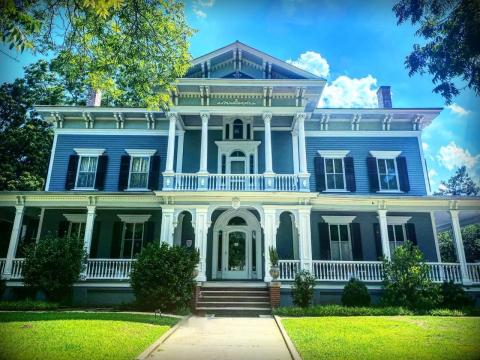 During the 1800s, Elmwood was the largest plantation in Beaufort County, spanning over 280 acres and holding 89 enslaved individuals. It was owned by the Grist family.

Elmwood was located in Washington, NC, which served as a major hub for the shipping industry due to its proximity to the Pamlico River. This river is historically known as a "Freedom Road," where enslaved people from all over the state would travel to escape plantations even as far west as Raleigh. Because of the number of ships traveling north – to freedom – Washington became a focal point for the Underground Railroad.

Even prior to its capture by Union troops, "it would likely have been visited by many abolitionists seeking to aid enslaved men and women," according to Jones.

During the Civil War, Elmwood Plantation was captured by Union troops – barely escaping being burned down during the siege like many other homes in Washington – and took on a new identity: Fort Ceres.

"Mothers and grandmothers who were domestics here, and they'd talk about the scratches on the walls from Civil War soldiers," said Jones. "And there's a narrative in the 44th Massachusets where the soldiers talked about inscribing love notes in the walls." 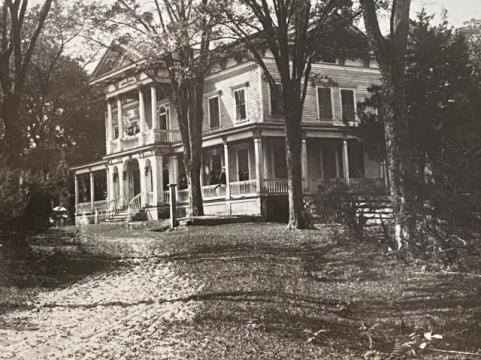 Historic narratives point to about 14 different regiments who spent time at Fort Ceres. Hospitalized soldiers would have been set up in beds on the second and, in particular, the third floor of the Elmwood home.

"They are a little piece of immortality, in case they never make it back home. Hundreds of years later, those scratches could exist and prove they were actually here," said Jones.

Soldiers might also have scratched in drawings or even played games on the walls. "I imagine something like tic-tac-toe or whatever the game would have been during that time."

These historic sketches were traced in with smaller points, like a pinhead, not carved with a knife. Historians and owners have been scouring the walls, searching for clues of these remaining glyphs. Several portions of the wall have new plaster splattered overtop, meaning it's possible the scratchings were found there and covered up by previous owners. However, there's still plenty of third-floor wall space to investigate. 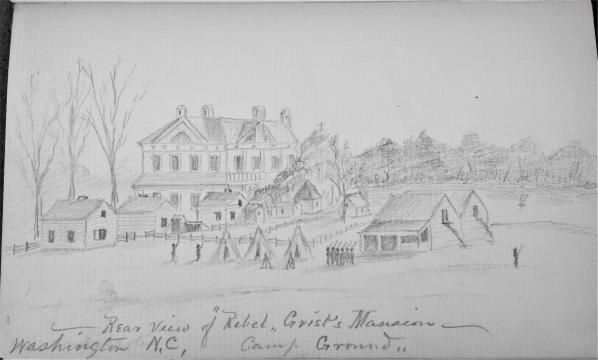 The first movement to begin employing African American men, free and not free, as Union soldiers

Reports show Union Colonel Lee specifically was at Elmwood – or Fort Ceres – from about 1863. A historic sketch shows the layout and appearance of Elmwood during its time as Fort Ceres.

In taking over the house as his headquarters, Fort Ceres became a refuge for enslaved people who had escaped and were seeking freedom.

"Enslaved people from all the places in the county started coming here for protection," said Jones. Under protection of the Union army, their old owners could not come take them away. 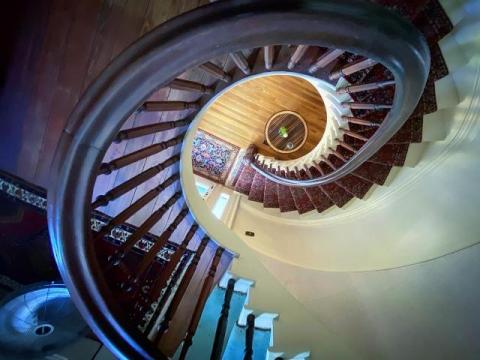 Once the largest plantation in the county, Elmwood became the safe-zone for men and women escaping slavery.

However, once enslaved people became free, they often had nowhere to go, no way to eat, and no method of making money or procuring a home. So many freed people would also live at Fort Ceres and get jobs with the Union army, helping build forts or dig ditches. In return, they'd be given food, clothing and shelter.

The famous 1989 movie Glory tells the story which had its genesis at Fort Ceres, where Colonel Lee was the first person to employ African American soldiers – some free and some not free – into the service of the Union army.

Flyers from the era specifically seek "Men of African Descent" for the 35th and 36th regiments of "The United States Colored Troops." They offer payment of $10 per month in addition to a $100 bounty. The recruiting offices were located at Fort Ceres in Washington, NC. 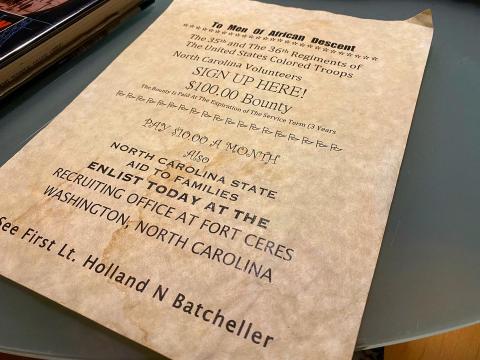 While Elmwood served as Fort Ceres, the Grist family left their home behind. 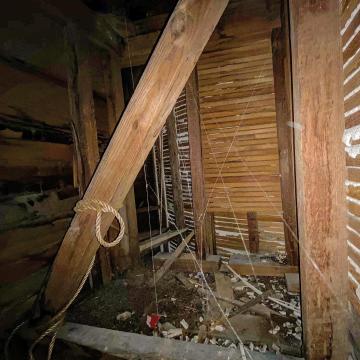 Just as historians are searching for the elusive scratches from hospitalized Union soldiers, the owners are trying to figure out the purpose of strange passageways and mysterious spaces in the centuries-old mansion.

The third floor space has been relatively untouched for decades and still holds dozens of antique trunks. Very little investigation has been done regarding the historic trunks and their content; however, one trunk revealed 1800s gowns – torn and tattered a bit, but in decent condition – that very well may have belonged to Mrs. Grist, the original owner. The third floor is truly a trove of lost history. 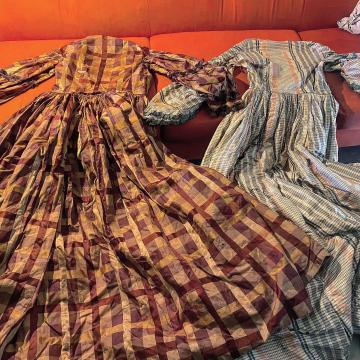 According to the owners, there's a large gap visible from outside the home above the tower window. However, they have not been able to figure out where that large space is located from inside the home.

They also discovered a passageway hidden behind the drywall on the third floor – like something out of the Narnia series. Cutting a small square into the drywall reveals a tunnel with antique wooden beams and historic flathead nails that date back to the 1800s. The 'roof' of the tunnel is more than 10 feet high, and the internal wall is made of layered wood and concrete, while the external wall is made of old wooden panels.

One architect suggested the internal wall's make-up of concrete and wood could indicate its use in preventing bullets or cannons from penetrating the home.

Another historian questioned whether the historic tunnel could have been a secret storage space. In the 1800s, it was common for abolitionists to utilize 'false walls' to hide men and women escaping slavery when hunters would come looking for them.

The passage spans the entire front portion of the mansion's third floor, then drops all the way to the first floor.

No one is certain what this hidden passageway was used for – or whether it was simply part of the multiple expansions added to the house over 200 years of existence. 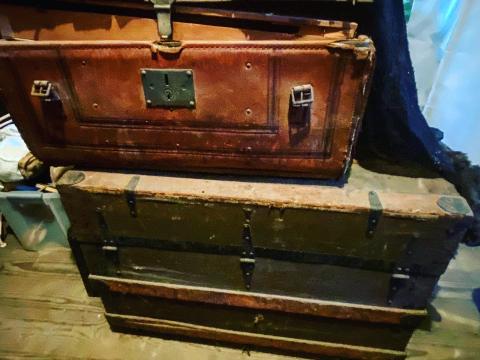 In 1860, the Grist family ordered a major renovation. "It was just before the Victorian trend, in the midst of the Italianate style's popularity," said Smoot. "Big heavy brackets, columns and railings."

That Italianate renovation gave the mansion the appearance is still carries today – a bold and classic style perfect for a charming historic bed & breakfast.

Elmwood also went through a renovation in 1910, when the mansion was moved down the road from its original site.

During any of these major updates to the home's architecture, false walls or secret tunnels could have been created – and notes etched in the walls by Civil Wars soldiers could have been lost. The variety of renovations to the mansion adds more complexity to the mysteries hidden within.

Today, guests can experience Elmwood 1820's history for themselves, staying the night in their choice of themed rooms. Breakfast on the southern-style porch, overlooking the lawn with grand trees and fountains, is like a trip back in time.

Little Washington is full of historic homes and a charming historic district, offering tours and museums dedicated to the town's role in the Underground Railroad. Some of the town was destroyed in a fire during a siege in the Civil War, making the surviving structures all-the-more important. 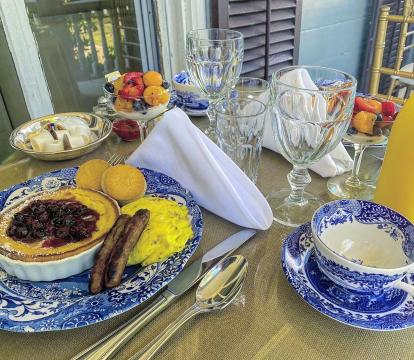 Its proximity to the river creates a focus on boating and kayaking – even yoga classes take place on paddle boards.

Smoot and Butler are working to preserve their little slice of history. For those looking to explore this history for themselves, the Elmwood 1820's Facebook and website provide a glimpse into 200 years of stories, central to Washington and North Carolina itself.

Exploring inside the secret passageway live