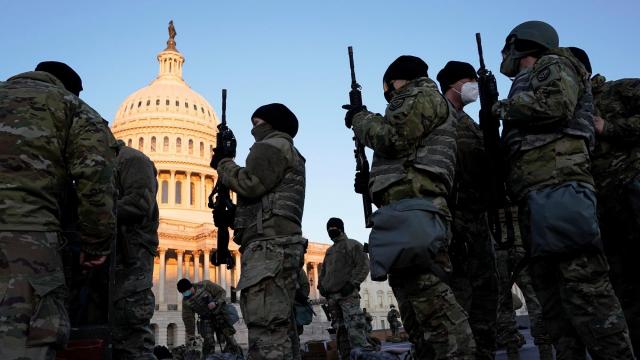 Contee's announcement came as the US Secret Service on Wednesday officially took charge of security for President-elect Joe Biden's inauguration as authorities warn of new threats across the country and unfold a massive security presence in Washington, DC, after last week's violence at the US Capitol.

While federal investigators continue to track down suspects from last week's attack, law enforcement agencies remain primarily focused on planning ahead with inauguration just days away.

The Secret Service is now leading that effort, working in coordination with federal law enforcement agencies and the Pentagon. Multiple senior defense officials told CNN that there is a major interagency "requirements" meeting Wednesday to discuss in depth security requirements.

At the same time, extreme measures are already being taken in light of the insurrection, with thousands of National Guard members deployed to the Capitol and high fencing securing the area.

There are significantly more US troops currently deployed on Capitol Hill than in Afghanistan and Iraq combined, a staggering statistic that underscores just how massive the security presence already is.

Multiple defense officials tell CNN that the total request for National Guard is close to 30-thousand guardsmen to support US Capitol Police, Park Police and Washington Metropolitan Police Department but officials believe that the actual number needed is closer to 20,000. The final numbers will be provided by the Secret Service.

The officials added that there is no concern that there will be any shortage of Guard forces to meet requirements from the 50 States and the District of Columbia.

Asked if he's ever seen this much law enforcement reinforcement coming to the District, the newly-installed Chief Contee, who is a veteran of the Metropolitan Police Department and a lifelong DC resident, answered, "not at this level, no."

The Secret Service is taking the lead of inauguration security planning efforts as there is a growing concern among law enforcement officials that violent mobs' success in breaching the Capitol has increased the potential for attacks because people may be emboldened to carry out violence.

"The chatter is off the charts right now," one official said.

CNN reported on Tuesday that thousands of armed pro-Donald Trump extremists are plotting to surround the US Capitol ahead of Biden's inauguration, according to a member of Congress who was among those briefed late Monday.

But the Secret Service is prepared to secure the inauguration, the Department of Homeland Security's second-in-command Ken Cuccinelli told CNN, while acknowledging there are always "problem players" that show up.

"There's always problem players that talk before an inauguration, and there are always some that show up," Cuccinelli, the DHS senior official performing the duties of the deputy secretary, when asked about threats to the upcoming event. Cuccinelli also said that the Secret Service is preparing for the possibility of a bigger security problem than the events of January 6 but added that the agency is "thoroughly prepared to contend with it."

Several officials told CNN that there is a much better feeling that things are organized and being put into place correctly because the Secret Service is in charge, with one official simply saying: "They don't mess around."

Cuccinelli, who has been the public face for the department on security issues since the Capitol attack, said the biggest change to security preparations has been moving the start date for the National Special Security Event (NSSE) up six days, with the official designation coming Wednesday morning.

The inauguration is designated as a NSSE, which is intended to bring in the full force of the federal government and its resources and puts the Secret Services as the lead for security operations.

Cuccinelli said moving the date up will make coordination between relevant agencies and local, state and federal governments "smoother and easier." It also allowed for an earlier start to preparations like putting up fencing.

When asked about the current threat level, Cuccinelli said: "There is a good bit of chatter there, I wouldn't say off the charts. I think that there's a lot of reaction to January 6 and setting the election piece of it aside, that's a continuing reaction of the violence of the last seven and a half months, pretty much continuously in various parts of the country." A separate federal law enforcement official previously described an "off the charts" level of chatter to CNN.