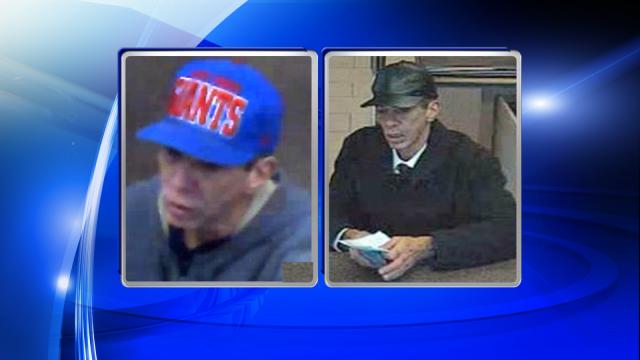 Raleigh, N.C. — Police said Thursday that a man who robbed a bank in Raleigh's Cameron Village "closely resembles" the man they have been searching for in another bank robbery near North Carolina State University exactly one month ago.

Investigators said the robber walked into the Wells Fargo branch at 601 Oberlin Road around 9 a.m. Thursday, passed a note to a teller and then fled on foot.

The case is similar to a Wells Fargo robbery on Dec. 8 in which a man passed a note to a teller demanding money and then fled on foot with an undisclosed amount of cash. That robbery happened around 10:30 a.m. at 2600 Hillsborough St. – less than a mile from Thursday's robbery.

Surveillance images from both crimes show a black man with a light complexion who is between 40 and 50 years old.

In Thursday's robbery, the man is wearing a black leather ball cap, black jacket, a white dress shirt and a dark-colored tie. In the Dec. 8 robbery, he was wearing a New York Giants cap and a gray hooded sweatshirt.

Anyone with information about either robberies can call Raleigh Crime Stoppers at 919-834-4357.

The North Carolina Bankers Association offers rewards up to $5,000 for information leading to the arrest and indictment of anyone involved in a bank robbery. Tips can be submitted confidentially through its website or by calling an FBI tip line at 800-209-2293.