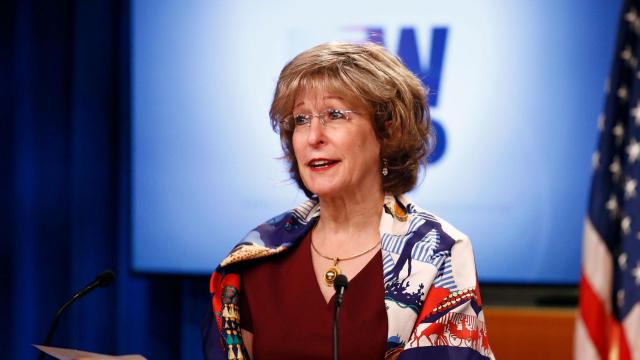 CNN — The second highest-ranking official at the US Agency for International Development was ousted Friday, two sources familiar with the situation told CNN.

Bonnie Glick, the deputy administrator of the agency, received a note from the White House on Friday afternoon telling her that she needed to resign by 5 p.m. or she would be terminated without cause at the pleasure of the President, the sources said. One of the sources said the note included a termination letter signed by Director of the White House Presidential Personnel Office John McEntee.

Glick did not consider resigning, that source said.

Sources told CNN they feared the move could imperil the ease of a potential transition between a Trump and a Biden presidency. Glick's ouster comes as the future of the US presidency hangs in flux, with former Vice President Joe Biden poised to win and President Donald Trump giving no indication he intends to concede.

Her removal from the post also comes the same day that John Barsa's term as acting administrator of the agency expires under the Federal Vacancies Reform Act, and sources believe that she was fired so he could remain at the helm. Barsa, a political appointee who was previously assistant administrator for USAID's Bureau for Latin America and the Caribbean, became acting administrator in April following Mark Green's departure from the agency. Under the law, Barsa could serve as acting administrator for only 210 days after the post became vacant unless a permanent replacement was nominated. Those 210 days expire Friday at midnight. However, with Glick gone, sources believe that Barsa can take over the second-in-command job in an acting capacity.

Another source at USAID told CNN they also suspected this could be the case. However, nothing has been communicated to agency personnel about these changes, or who will be leading the agency that oversees America's international development and humanitarian efforts.

CNN has reached out to USAID and the White House for comment.

Barsa is not well-liked by career officials, the source at USAID said, and people found it odd that he was named acting administrator because they had worked much more closely with Glick, a Republican appointee who was confirmed by the Senate to the deputy administrator role in January 2019.

Prior to her role at USAID, Glick was Deputy Secretary of the Maryland State Department of Aging under Republican Gov. Larry Hogan. She also worked at IBM and as a senior nonprofit executive and began her career as a foreign service officer at the State Department, according to her USAID biography.

Another senior figure in the international aid community spoke highly of Glick, saying, "People in the community have the highest respect for her" and that she "brought real thought leadership to the agency."

This person and the sources familiar expressed concern that her absence would be felt if there is a transition from a Trump to a Biden presidency.

"Should there be a transition, she will be missed and it will be a loss for USAID," the senior figure said.

One of the sources familiar also expressed concern that Barsa could bring in ideological appointees with no development background if he remains as leader of the agency.

During Barsa's tenure, USAID has had a number of controversial political appointees join its ranks.

Mark Kevin Lloyd, a religious freedom adviser appointed in July, has a long history of making inflammatory and anti-Islam remarks, including calling for an armed revolution if the Tea Party did not win at the ballot box, CNN reported at the time.

Merritt Corrigan, who expressed hostility toward refugees and immigrants, mocked same-sex marriage, called for establishing a "Christian patriarchy," and wrote it was wrong to "empower" girls and tell them they are "equal" to men, left the agency in August after a brief time as the deputy White House liaison.