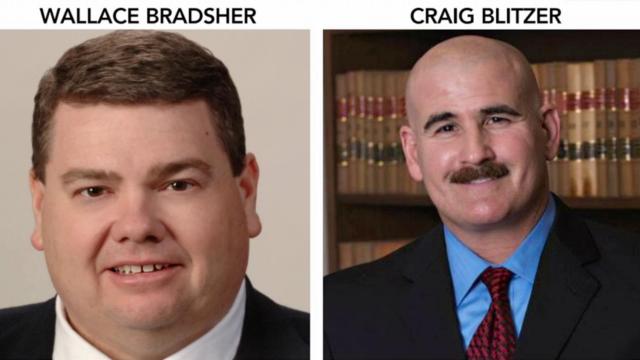 Raleigh, N.C. — The former district attorney of Caswell and Person counties was indicted Thursday on charges related to a scheme where he hired another prosecutor's wife for a no-show job.

"I am not guilty of these charges, and I will fight to defend myself in Court," Bradsher wrote in an email to WRAL News.

Craig Blitzer, former Rockingham County district attorney, pleaded guilty in July to failure to discharge the duties of his office, a misdemeanor.

Affidavits filed by Blitzer and his wife detailed the agreement that led to the resignations of the two prosecutors and the criminal charges against them.

Blitzer states that he and Bradsher concocted a scheme at a Wentworth, N.C., pizza parlor in early 2015 to hire each other's wives after officials with the state Administrative Office of the Courts informed them that ethics rules prohibit prosecutors from employing relatives. Blitzer, who had been elected the previous November, said he needed his wife to work to make up for the pay he lost in moving from private practice to the district attorney's office.

At the time, Cindy Blitzer was enrolled full-time in nursing school in High Point, and when she and her husband expressed concerns about her meeting her work obligations in Caswell County, Bradsher told her, "You focus on your studies. I’ll take care of the time sheets," according to the affidavits.

Craig Blitzer also helped his wife's schooling by getting people on her staff to take an online math course for her.

"During the course of Cindy’s nursing program, I asked one of my assistant district attorneys and a non-lawyer staff member to assist in completing coursework for Cindy," Craig Blitzer said in his affidavit. "I was aware that they did this during their regular work hours. In hindsight, I regret asking my colleagues to do this."

In entering his guilty plea, Craig Blitzer also repaid the state the $48,000 his wife earned.