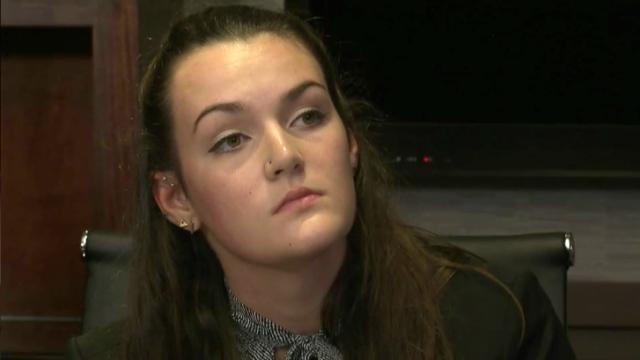 Hillsborough, N.C. — A University of North Carolina at Chapel Hill student told police that she thought she had been drugged before she was sexually assaulted on campus in February, according to search warrants in the case.

Delaney Robinson, a 19-year-old sophomore from Apex, has accused Allen Anthony Artis of raping her in an apartment at the Ram Village complex on Valentine's Day. She obtained warrants from an Orange County magistrate on Tuesday, charging Artis with misdemeanor sexual battery and misdemeanor assault on a female.

Artis, 21, a junior linebacker on UNC's football team from Marietta, Ga., surrendered to authorities Wednesday and was released on a $5,000 unsecured bond. He has been suspended indefinitely from the football team.

She said UNC administrators and the criminal justice system have dragged their feet on her case, and her frustration led her to pursue criminal charges on her own and announce the move in a news conference.

UNC Department of Public Safety obtained search warrants on March 2 – two weeks after Robinson reported the alleged assault – to obtain information from the cellphones of Artis, Robinson, her roommate and her boyfriend.

The affidavit used to obtain the warrants states that Robinson told investigators that she suspected she had been unknowingly drugged somewhere off campus that night before being taken to Rams Village. She also told police that texts and calls the night of Feb. 14 show her roommate was trying to find her and her boyfriend was trying to check on her well-being. Artis told police that he had swapped texts with a female friend that night before winding up back at his Rams Village apartment.

UNC officials have cited federal privacy laws in declining to comment on the allegations, but Chancellor Carol Folt issued a statement Friday saying that a sexual assault investigation is a difficult process for all involved.

"In every situation, we must be fair to all of the individuals involved and not rush to judgment, regardless of how that approach and the time it takes might be viewed in the court of public opinion," Folt said. "We are committed to ensuring every step of our policy and procedures is correctly followed. Sometimes, to get it right takes longer than anticipated. But in the end, a respectful, reliable and equitable investigation must be the result."

Artis' attorney also cautioned people against convicting him based on Robinson's allegations.

"People are harmed all the time by others taking a position on a story they know nothing about. My client has been painted as a marauding rapist with no opportunity to counter that assertion. That is unfair, unkind and untrue," attorney Kerry Sutton said in a statement.

UNC overhauled its policy on sexual harassment two years ago after being accused of creating a hostile environment for students reporting sexual assault. Folt said the changes led to a 52 percent increase in sex assault reports in the first year, as well as a 156 percent jump in people seeking available resources.