Fayetteville, N.C. — Dive teams are continuing to search for at least two vehicles that witnesses said crashed on Interstate 95 near Fayetteville and ended up in the Cape Fear River.

Sgt. Christopher D. Knox with the N.C. State Highway Patrol told WRAL an eyewitness said at least one vehicle went over a barrier at the site of the reported crash and plunged into the river. Chief Richard Bradshaw with the Vander Fire Department said at least three witnesses said they saw the crash involving a white vehicle and a black vehicle.

The call came in around 7 p.m. on Thursday.

Bradshaw told WRAL reporter Gilbert Baez that when he arrived on the scene Thursday night, he saw an individual who had transverse down a steep hill and dove into the water looking for a vehicle. So far, they have not found any vehicles in the water.

Several boats with divers, and a safety boat meant to keep the divers safe, are being used in the search, which resumed at 9 a.m. Friday. Sonar technology was also being used to find possible cars or victims underwater.

Friday afternoon, there were ten crews out on the water right now and nine individual divers, including divers from the Fort Bragg Fire and Emergency Services, Fayetteville Police Department and Cumberland County Sheriff's Department. Bradshaw said the divers were working in rotation so they wouldn't tire too quickly.

"It's going to be a long day...with the heat and the humidity, it's gonna be tough," he said.

Bradshaw said he's seen and heard of vehicles that strike the barrier of the bridge but wasn't aware of any vehicles landing in the Cape Fear River.

"This is a busy road, and we've had several accidents. We've had cars, in my past history, that strike the railing or the guard rail. I was talking with someone earlier, and I never remember one going over," Bradshaw said. "In all my years, I've never known one to go over."

All lanes on I-95 southbound near NC-87, Exit 46 and the Fayetteville airport were closed Thursday night as crews from several agencies assisted.

On Friday, a command center was set up about a quarter of a mile from the site of the crash so that traffic would not be disrupted on I-95.

Bradshaw said divers will keep looking for the vehicles until they get confirmation there are vehicles in the water, or talk to other witnesses who say that did not happen.

The State Highway Patrol is asking anyone with information that could be related to search to contact Troop B Communications Center or the Cumberland County SHP Office. 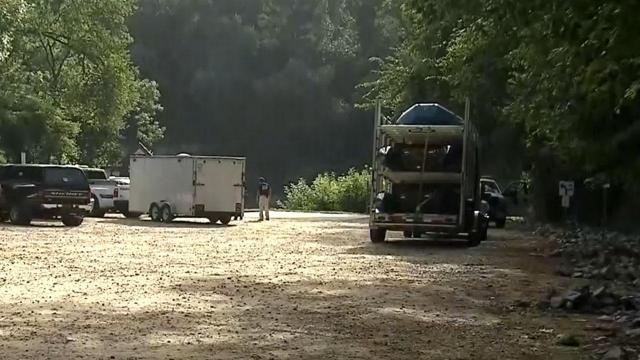