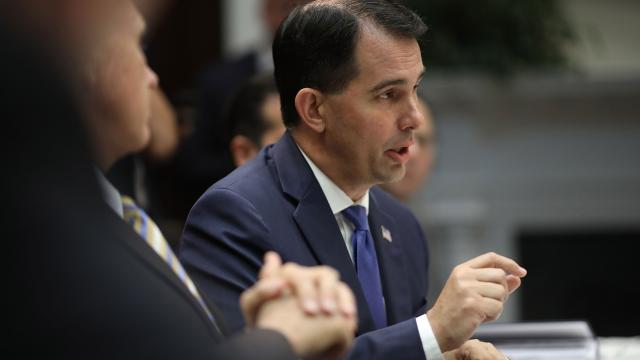 (CNN) — Wisconsin Republican Gov. Scott Walker on Tuesday attempted to downplay the impact a series of controversial bills would have on his Democratic successor, telling reporters that the measures are not "a fundamental shift in powers" for incoming Gov. Tony Evers.

Walker's comments come as he is considering a series of bills, passed by the state's Republican-controlled legislature in a lame duck session, that would curtail the powers of the incoming Democratic governor and attorney general.

The measures, which have received bipartisan criticism in recent days, would limit early voting, shield a jobs agency from the governor's control through next September, codify Medicaid work requirements and potentially block the incoming attorney general from withdrawing the state from a lawsuit over Obamacare.

Walker did not say what he would do with the bills that were passed by the state's Republican-controlled legislature in a lame duck session, but said that he is considering vetoing aspects of the bill and asking government lawyers to determine the extent of his veto power. He also remarked that he didn't ask for or draft any of the bills.

Walker also echoed what he wrote on Facebook earlier in the day, arguing that that the incoming governor would still have "some of the strongest powers of any governor in the nation" regardless of whether he signs them or not.

Walker said on Facebook -- and echoed in his presser -- that is criteria for the bills are transparency, accountability, stability and protecting taxpayers. He also signaled his support for some of the legislation that passed.

"These are the reasonable criteria we will use to review the legislation passed during the extraordinary session," he writes.

Unmentioned in Walker's post, however, are some of the more controversial changes in the bills, including limiting early voting -- a move that is seen to benefit Republicans -- and formalizing Walker priorities like stricter work requirements for Medicaid.

Walker, after eight years in office, lost to Evers in November. The governor is now focused on his own legacy and Tuesday's speech to a small business gathering highlighted much of what Walker believes he accomplished in his years in power.

The governor, when asked by CNN if he worried about how the controversial bills would impact his legacy, said he was not worried "about what the media says."

Walker is taking his time with the bills, which passed the Republican-controlled Senate and Assembly last week. The governor has yet to request the bill from the legislature and has six days, not counting Sundays, to either sign or veto the measures once they reach his desk. The bills will be automatically sent to him on December 20 if he doesn't not request them sooner.

Walker said Tuesday that he would not act on the bill until the legislature provides him tools to address layoffs at Kimberly Clark, a company that employees Wisconsinites at two factories.

Evers has asked the governor not to limit his power during the lame duck. The two spoke last week and Evers said on Sunday that he was "not particularly encouraged" that Walker would veto the legislation after the conversation.

Walker said Tuesday Evers was not able to cite one specific issue he has with the bills.

"He didn't give me other examples," Walker said. "To me, that is the prime example when people ask me about this, I asked what do you object to?"

While Evers and other Democrats have reserved the right to sue if the bills are signed, Democrats have also looked to pressure Walker by arguing signing the measures will damage his legacy in Wisconsin.

"It's around Scott Walker's legacy," Evers said on NBC's "Meet the Press." "He has the opportunity to change us and validate the will of the people that voted on November 6."

And while many Republicans in Wisconsin have backed the bills -- especially Assembly Speaker Robin Vos and Senate Majority Leader Scott Fitzgerald, two men who will gain more power if the bills pass -- some Republicans have criticized the bills and Walker's consideration of them.

"I am hopeful is that Gov. Walker will discuss with Gov.-elect Evers and make some commitments as to how we're going to operate the state of Wisconsin," former Republican Gov. Scott McCallum told WISN 12 NEWS. "It becomes very dangerous; we keep going down this slope of getting worse and worse, and as I tell people: I didn't like this when Democrats did it, why would I like it when Republicans do it?"

And Charlie Sykes, a Republican commentator from Wisconsin who has deep ties to Walker, wrote last week that the governor should veto the bills.

"Signing the lame-duck legislation would be an especially classless way for Walker to leave office; it will tarnish his reputation in ways that I'm not sure he grasps," he wrote. "And, frankly, it's just not worth it."