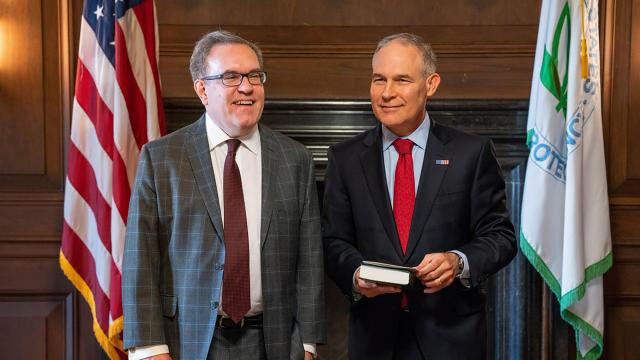 WASHINGTON — Before resigning as the head of the Environmental Protection Agency this year, Scott Pruitt delighted President Donald Trump with his zeal for proclaiming sweeping regulatory rollbacks, even though he left behind a trail of courtroom setbacks.

Andrew R. Wheeler, a former energy lobbyist whom Trump plans to nominate to lead the EPA, has been quietly cleaning up the mess.

Where virtually all of Pruitt’s hastily written rollbacks and suspensions have been blocked by the courts, Wheeler has taken a far more deliberative approach, immersing himself in the legal intricacies — a strategy that could make Wheeler one of the most effective drivers of the Trump administration’s ambitious plan to rewrite the nation’s rule book on the environment and climate.

“He’s done a fantastic job,” Trump said Friday of Wheeler, who has served as the EPA’s acting administrator since Pruitt stepped down in July amid a wave of ethics scandals. Supporters say the White House sees in Wheeler the anti-Pruitt: drama-free, low-key, and, most importantly, able to get the proposed rollbacks through the courts.

In doing this, however, Wheeler has already found himself at odds not only with conservative groups but others within his own administration.

But these tensions underscored what many say is the essential difference between Trump’s first and second choices for EPA chief: Where Pruitt sought the limelight, Wheeler sweats the details. And that could make him a far more formidable weapon than his predecessor in the Trump administration’s vast reshaping of environmental and climate rules.

“Andy Wheeler is one of the few calm spots in the turbulent seas of this executive branch,” said Scott Segal, a fossil-fuel lobbyist for Bracewell who has worked closely with Wheeler. “That must come as a pretty welcome relief to this White House.” He also has “sufficient process understanding to make that agenda stick,” Segal added.

This summer, for instance, the EPA took steps to replace the Clean Power Plan, a major Obama administration policy designed to reduce greenhouse gas emissions from power plants. The new version of the plan is significantly weaker.

But Pruitt had wanted to eliminate the program entirely, while Wheeler, according to several industry sources, insisted that the government was legally obligated to have a climate plan. Therefore, eliminating the Clean Power Plan without replacing it could be challenged in court and leave an opening for even tougher regulations under a future Democratic president.

“I got phone calls from conservatives wanting to know, ‘Why did we do anything? Why are we putting forward a proposal at all?'” Wheeler acknowledged in an interview last week. His argument, that more restrictive replacement is better than killing off the climate regulation entirely, won the day. Then, in August, the EPA and the Transportation Department moved to gut another major federal effort to combat climate change by relaxing rules aimed at reducing car tailpipe pollution. The Trump administration plan also voided California’s ability to set its own, stricter standards, triggering a potentially ugly legal battle between Washington and blue states over the ability to fight global warming.

Wheeler, according to several people involved in the discussions, pushed back forcefully against an analysis used by highway officials to justify the rollback, which argued that stricter fuel pollution rules would cause thousands of deaths in road accidents. The agency argued that more efficient cars are less safe because they are lighter.

People who have attended meetings with Wheeler said he argued that the fatality numbers relied on bad calculations and were likely to be successfully challenged in court.

Wheeler on Friday denied that he had clashed with Jeffrey A. Rosen, the chief Transportation Department architect of the auto-standards rollback, saying he merely sought to understand his colleagues’ mathematical modeling and legal reasoning.

“I wanted to make sure what we were putting forward would be upheld in the courts, and he assured me that the work they had done would be,” Wheeler said.

A department official, speaking on condition of anonymity because he was not authorized to speak on the record, said on Tuesday that there was “no dispute” between the agencies.

Wheeler’s predecessor, Pruitt, faced more than a dozen federal investigations into his conduct, including his extensive use of first-class air travel, renting a condo from the wife of an energy lobbyist with business before the EPA and enlisting aides on personal tasks like buying a used mattress from Trump International Hotel and seeking a Chick-fil-A franchise for his wife.

The grandson of a coal miner and an Ohio native, Wheeler studied biology in college and got his first job after law school in the 1990s working at the EPA’s office of pollution prevention and toxics. He later worked in the Senate for 14 years, most of that time for Sen. James Inhofe, R-Okla., who has denied the established science of climate change.

During that time, Pruitt was seen as a protégé of Inhofe. The senator last week said he strongly supported Wheeler’s nomination.

As an energy lobbyist since 2009, Wheeler’s top client was Robert E. Murray, the chief executive of one of the country’s largest coal companies, a fierce opponent of EPA climate change regulations and a denier of established climate science.

Asked last week to describe his understanding of the best available science on global warming, Wheeler said: “I think climate change is happening. Man has an impact. CO2 has an impact.”

It’s not a full acceptance of the scientific consensus that humans are the dominant cause of rising global temperatures. But it’s closer to it than the positions of Pruitt, who falsely claimed that there was “tremendous disagreement” among scientists about how great a role humans play in driving warming, or Trump, who said “I don’t know that it’s man-made.”

Still, Wheeler argued, sweeping regulations, like the plan put forth by the Obama administration to force a shift toward renewable energy by asking states to reduce emissions from coal plants, would have “basically ended the coal industry in the United States.” “People have to realize the use of coal worldwide has not peaked,” Wheeler said.

Since taking over as acting EPA administrator, Wheeler has replaced Pruitt’s artwork of President James Madison with wall hangings of the Senate roll call vote for a highway spending bill he helped pass in 2005 and the bronze medals he earned for budgetary work at EPA in the 1990s. He said he has not needed to use the $43,000 secure phone booth Pruitt installed.

He also has made a point of being more deeply involved in the agency’s inner workings.

Wheeler visited all 10 of the EPA’s regional offices at the start of his tenure and has involved the agency’s longtime career employees in policy meetings, things Pruitt hadn’t done. Moves like these have won praise from some of Pruitt’s fiercest critics.

“He’s somebody that respects the institution of the EPA,” Kevin Minoli, the EPA’s former top ethics counsel who had called for investigations into Pruitt, said of Wheeler.

That hasn’t endeared him to environmental groups, however. In fact, many say Wheeler’s softer touch has made it harder to focus the public’s attention on his weakening of clean air and water laws.

“In some ways Pruitt distracted from some of the very negative things that were going on in environmental law, but in other ways there was a lot of attention being paid to EPA,” said Conrad Schneider, advocacy director for the Clean Air Task Force, an environmental nonprofit organization.

Analysts on both sides say Wheeler is more pragmatic than his predecessor and more disciplined. Where Pruitt would throw his energy into ideological battles, like trying to create support for a military-style televised debate of climate science, Wheeler has eschewed the limelight and strategically focused on a handful of major policy initiatives.

Under Wheeler’s watch, the EPA has moved forward with rolling back or weakening every major Obama-era climate change regulation. In addition to the proposal to loosen car pollution rules, those moves include replacing a landmark effort to curb greenhouse gas emissions from coal-fired power plants with a plan that the agency says will see air pollution actually rise, and reducing limits on methane pollution, a powerful greenhouse gas, from oil and gas wells.

He also has focused on work begun by Pruitt to revise Obama’s clean water regulation, known as the Waters of the United States rule, saying on Friday that the revisions “will be coming out soon.” He has taken on an effort to weaken and perhaps repeal a 2011 rule that limits mercury, a toxic chemical that is emitted from coal plants. And, while he has pushed back to 2020 a plan initiated by Pruitt to impose broad new restrictions on the types of scientific research the EPA uses to write regulations, he said he fully intended to finalize it. Emails obtained by the Union of Concerned Scientists, an advocacy group, have found that Pruitt’s political staff excluded the EPA’s chief science adviser from helping to design the rule. The group says the absence of scientists in the writing of the regulation undermined the administration’s argument that the proposal was done in the interest of science.

“Which is why we’re taking our time with it now,” Wheeler said. “It was proposed before I got here.”

However, under Wheeler, the EPA also has eliminated the office of chief science adviser.

“By word and deed, Wheeler is proving to be as bad and dangerous as Pruitt,” said John Walke, clean air director at the Natural Resources Defense Council.

Conservatives see Wheeler and his predecessor in a different light. Among them is Myron Ebell, who led Trump’s EPA transition team.