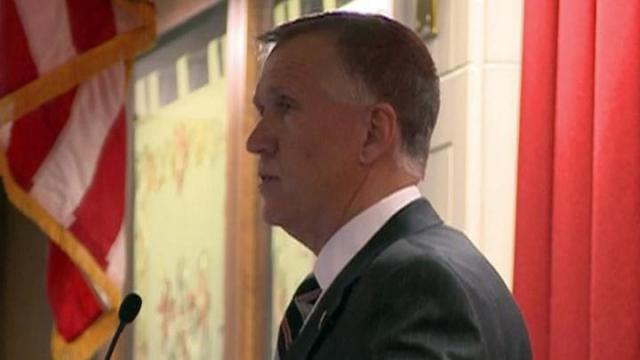 House Speaker Thom Tillis invited the school leaders to the Legislative Building to begin a dialogue so legislation can be drafted to meet the needs of school districts. He appointed several superintendents to serve on working groups with lawmakers

"This is a process of building relationships," said Tillis, R-Mecklenburg. "There will be instances where we agree to disagree, but my guess is there will be most cases where even the level of disagreement can be diminished."

Superintendents said they were thankful for the opportunity to speak with lawmakers, but they weren't shy about criticizing ideas with which they don't agree.

Brunswick County Schools Superintendent Ed Pruden called plans to offer tax credits or vouchers for students to attend private schools the start of a process to unravel the public education system and create a two-tiered K-12 system in which private schools select the top students and public schools are left with children who are disabled, don't speak English as their first language or come from low-income families.

"Whereas the old segregation was by race, the new segregation would be by socio-economic class," Pruden said. "For those who desire the return of the segregated days of old, one is about as good as the other."

Tillis said it's "an absurd notion" to think the General Assembly would try to dismantle North Carolina's public school system. Still, he and others said many families need to have a choice on educating their children when the school to which they're assigned doesn't fit their needs.

Greene County Schools Superintendent Patrick Miller asked lawmakers to exempt any teachers who are already tenured or who are in the pipeline for tenure from efforts lawmakers make toward eliminating tenure, saying it could lead to lawsuits.

Other superintendents also asked lawmakers to think twice about instituting a merit pay system for teachers, saying it would kill any collaboration among teachers in a school.

"It seems to me our kids know more about how to use these devices than do the teachers teaching the students," Horn said. "At some point, we've got to lead, and in dealing with the digital environment, the kids are leading, and they need leadership."

Lee County Schools Superintendent Jeff Moss said better teacher training means nothing unless districts have the resources in place for both teachers and students to use in the classroom.

Tillis told the school officials not to expect much in terms of added state funding in next year's budget, noting problems in the state Department of Health and Human Services will likely eat up most of a $100 million surplus. He encouraged districts to adopt his "finder's keepers" rule of budgeting to encourage cost savings that will be reinvested in school programs instead of being taken away.

"At a time when we're in a cash-constrained mode, it's the only way that we can find, near term, additional money," he said.

Gaston County Schools Superintendent Reeves McGlohon said districts have learned in recent years how to be frugal, but he asked lawmakers to do away with annual discretionary cuts that come during the school year and force cuts to classroom spending.

"We understand that we live in a world where resources are few and needs are great," McGlohon said. "The discretionary cut is something we find difficult to work with."

Other issues addressed during the two-hour meeting include giving districts more flexibility with their school calendars, possible revisions to state regulations and changes to the state's system of grading schools.