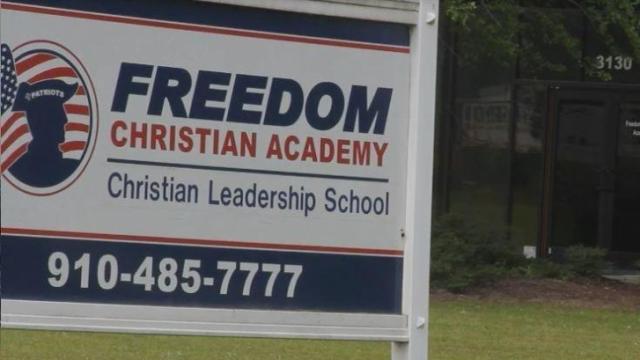 Fayetteville, N.C. — The head of a Fayetteville private school under fire for an academic scandal and having a convicted sex offender perform work on campus is taking an unpaid leave of absence.

“I do this with the full support and encouragement of the school board," she said in a statement. "The leadership of the school has determined that the controversy of the past month and Freedom’s future must be compartmentalized to move forward in the present. This is a school the Lord has clearly blessed with a strong testimony of God’s faithfulness to this generation of children and young people.”

The Cumberland County Sheriff’s Office is investigating claims that Dayton allowed Paul Conner, a registered sex offender, to work at the school and that administrators changed student grades.

Dayton has not been charged, but was named in Conner's arrest warrant as a co-conspirator.

Natalie Munoz, who oversaw the academy’s high school, has been named interim head of school.

Investigators began looking into the school in March after an unidentified parent withdrew her children when discovering Dayton knowingly allowed Conner to work there during the 2011-12 academic year, the department said. Conner’s wife was a teacher at the school during that time, deputies said

The school was issued a subpoena by deputies to produce all records related to Conner's employment at the school and the changing of student grades.