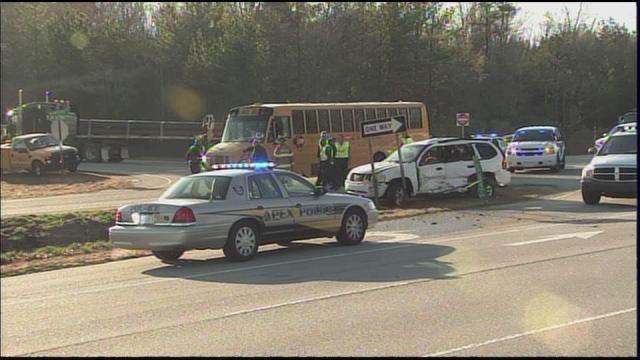 Holly Springs, N.C. — Five people were taken to a hospital Monday after a school bus and GMC Envoy crashed at N.C. Highway 55 and Old Smithfield Road in Holly Springs around 7:20 a.m., according to authorities.

The bus was heading to Lufkin Road Middle School when it was T-boned by the SUV, police said.

Two students and the bus driver complained of stiffness in their necks, authorities said.

The SUV driver, a 17-year-old student at Holly Springs High School, and her 15-year-old passenger were also taken to the hospital with minor injuries.

Holly Springs police said they planned to charge the SUV driver with failing to yield at a stop sign.